Home Blog Install and configure an FTP server with PowerShell

Install and configure an FTP server with PowerShell

Prateek Singh  Thu, Aug 16 2018Thu, Aug 16 2018  powershell, web server  4
In this post you will learn how to install an FTP server with PowerShell. I will show you how to configure the site name, port, and root folders. Then I will explain how to create FTP users, how to authenticate users, and how to configure the SSL policy and NTFS permissions.

Latest posts by Prateek Singh (see all)
Contents of this article

Before you can begin configuring your FTP server, you first need to install the required Windows features: FTP, the Web Server (IIS), and the Management Tools to administer it with PowerShell.

After the installation completes, import the WebAdministration module. This will map an Internet Information Services (IIS) drive (IIS:\) through which we will configure our FTP site later in this article.

Now you can create a new FTP site using the New-WebFtpSite cmdlet by providing an FTP site name, root folder for your FTP site, and port number. I'm choosing port 21, which is the default FTP port, but you can also specify any custom port for your FTP site.

After running the cmdlet, you'll see the FTP site and bindings in IIS Manager. 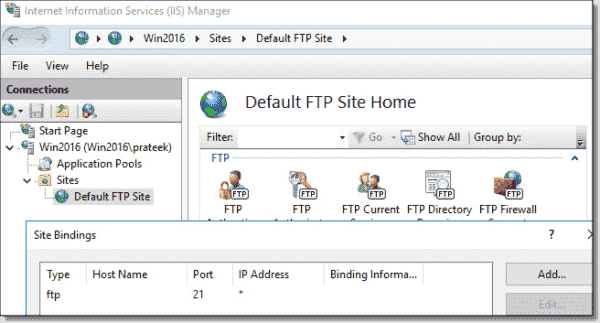 The FTP site in IIS

After creating a new FTP site, you can create a Windows user or group through which you can control the access to the FTP server. Let's first create the Windows local group:

Then we will create a new local FTP user with a username and password:

Later we will add the FTP user to the Windows group: 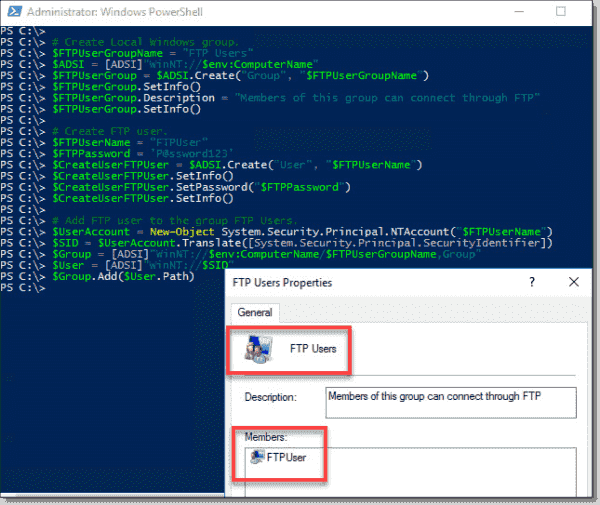 Now we enable basic authentication on the FTP site and authorize the Windows group that contains the FTP user so it can access the FTP site. 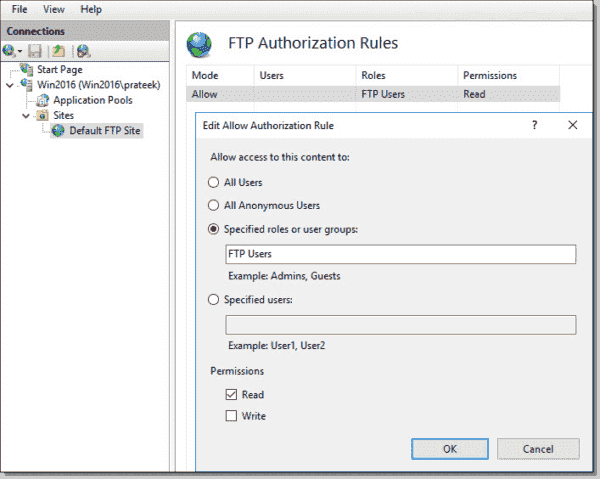 SSL policy and NTFS permissions to the FTP root folder ^

Next, we change the SSL policy from Require SSL to Allow SSL connections.

The commands below set the NTFS permissions on the FTPRoot folder to allow the FTP user group to access the files.

You can verify this from the FTP root folder properties under the Security tab. 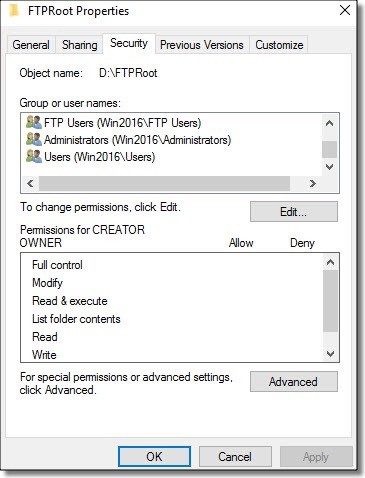 NTFS Permissions on the folder

After all the configurations are complete, it is advisable to restart the FTP site:

You can then test the FTP server, which should allow you to access files, content, and directories under the FTP root folder. 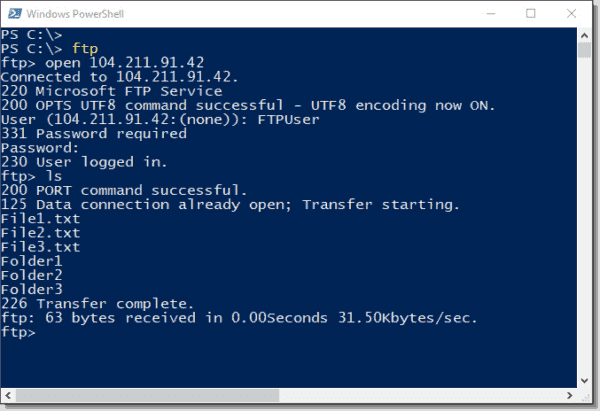 Setting up an FTP server on a Window server requires configuration at many levels. With PowerShell you can install Windows FTP features and create the FTP server with the detailed configuration very easily. You can also create new FTP users and authorize them to access the FTP root directory in an automated fashion. This can come in handy if you have to apply the same settings for several machines.