Include and exclude folders in roaming user profiles

Home Blog Include and exclude folders in roaming user profiles

James Rankin  Wed, Mar 22 2017Wed, Mar 22 2017  desktop management, roaming profiles, windows 10  5
A Group Policy Object (GPO) has always allowed administrators to exclude folders from a roaming profile but not include them. I'd always assumed that the functionality of a roaming profile was more or less hardcoded, whereby it only captured data from AppData\Roaming. However, I have to admit I was mistaken, and I give big thanks to Raphael Schulz for pointing this out to me.

No particular engine controls roaming profiles. They instead rely on a registry value in HKCU\Software\Microsoft\Windows NT\CurrentVersion\Winlogon. This value is a string (REG_SZ) format and is called ExcludeProfileDirs. It tells the roaming profile what not to save from the %USERPROFILE% folder. The screenshot below shows the default values on Windows 10.

Why to include folders ^

So by this method, if we were to remove AppData\Local from the exclusion list, and then add all the other subfolders to the exclusion list except the one we are interested in (TileDataLayer), we could make our roaming profile capture the Windows 10 Start Tiles settings.

Now the number of subfolders within %LOCALAPPDATA% that you need to exclude will depend very much on what your application sets are. It is very important to exclude folders like Google (for Chrome) and Mozilla (for Firefox) as these bloat quite heavily.

You need to make sure that you keep the exclusion list current and streamlined; otherwise you will soon start capturing lots of unwanted data that is transmitted to and stored on the network. The example list I have here is based around a very simple Windows 10 setup. So make sure you include all relevant subfolders for your environment!

How to include and exclude folders ^

The easy way to enforce this is to use a Group Policy Preference (GPP). Here is an example of the one I have used to set this. Make sure the list is semicolon-delimited, and state the excluded folders as subfolders of the %USERPROFILE% folder.

If you're using the latest version of Windows 10 fully patched, you should find that using a roaming profile in this way allows you to seamlessly maintain Start Tiles settings, file type associations, and everything else the user needs.

Finally, you'll need to apply slightly changed permissions to the profile folders to allow administrative access for ongoing monitoring and maintenance. I normally apply permissions as below either through inheritance or GPO settings. 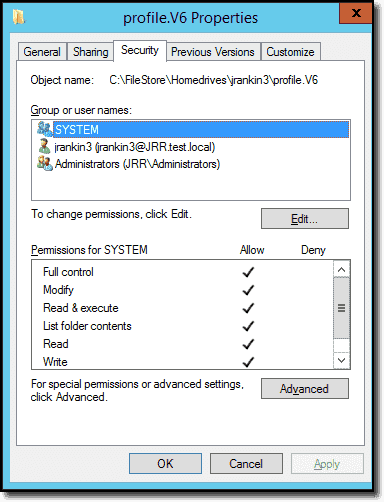 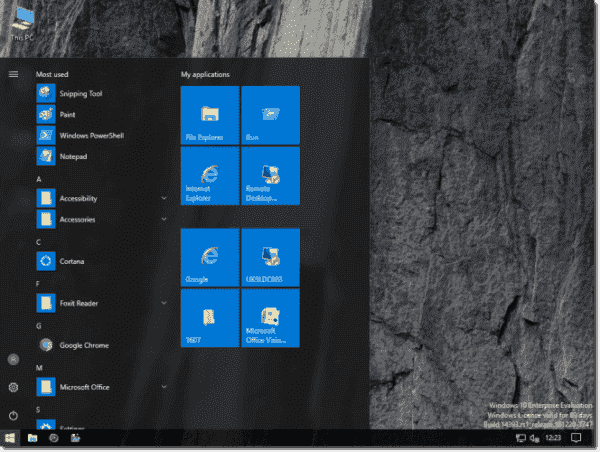 What folders to include ^

In an ordinary environment, here's a good list to start with. It includes the registry entries to cover you for some of the most common folders out there on a Windows 10 machine. If you aren't using some of the software specified, then it won't cause any trouble to add them in. If they're not present, the system won't process them at all.

Bear in mind that these entries need to be semicolon-delimited.

Obviously, you will still have the limitations of a roaming profile: possible corruption, last writer wins, limited to a single OS or profile version, and so on. But for a lightweight method of a roaming user state from session to session, it works very well. There's also the added bonus that it will extend onto Server 2016 Remote Desktop Session Host (RDSH) sessions as well. If you're using Modern Apps on Windows 10 though, you will get blank Start Menu entries where the Modern Apps were on the Server 2016 session.

However, this little trick also extends your capabilities with roaming profiles a lot. You could even selectively include other folders from %LOCALAPPDATA% if you want to roam them as well. Logon times are also quite reasonable with this method. I observed around a minute for the very first logon after creating the roaming profile, and 20–40 seconds for each logon after that.