Kyle Beckman  Mon, Apr 6 2015Mon, Apr 6 2015  desktop management, group policy, hardware, performance  0
“My computer is slow” is a very common support complaint that IT departments receive. But did you know that some of the configurations you’re using on your computers could be causing this slowness? In this article, I’ll cover some changes you can make to your computer configurations to speed up boot and login times.
Contents

Desktop and laptop computer configurations can get very complicated, very quickly, in a managed environment. Depending on the organization of your IT department, a number of different people may have their hands on things, such as computer purchasing, operating system (OS) deployment, configuration management, antivirus, and patching. Even with a good change control process in place, simple changes can make computers painfully slow for end users when they boot and have to log in.

Before you start a project to improve desktop/laptop computer boot times, I would recommend collecting a few pieces of information. If your project requires funding, these numbers should help you.

First, we need to establish the current boot and login times for some of our existing computers. I recommend enlisting the support of some of your customers to do this step; don’t do this with VMs or test systems that aren’t being used day to day. Visit your end users in their offices, take a stopwatch, and time how long it takes their computer to boot from completely off to ready to log in. Then, time how long it takes from Ctrl+Alt+Delete to when the Desktop is up and ready to use. Once you’ve performed your optimization, you’ll want to come back and repeat the process to get the new boot/login times.

Next, you’ll need to visit someone in the Human Resources (HR) department to find out hourly rates for employees. We’re not looking for the exact number for specific employees here—just a generalized number for a department or group of employees so we can show how much time is being wasted by slow system startup.

If we’re able to take a slow boot of 6 minutes to 3 minutes for an employee that makes $35 an hour:

As you can see, slow boots/logins are potentially costing your organization a lot in wasted productivity. These reboots also don’t take into consideration things such as software deployments, updates, or user-initiated reboots that could run the number up higher.

Obviously, replacing existing machines with newer models is going to improve boot and login speeds, but you can perform certain upgrades to existing computers if complete replacement is out of the question. First, RAM is an easy upgrade for most laptop/desktop systems. If you’re still running 32-bit/x86 systems, there’s no reason they shouldn’t all be maxed out at 4GB (the maximum a 32-bit system supports). If those systems are going to be refreshed to a 64-bit/x64 OS, or if you have other 64-bit systems, the limit is really up to what the system supports and how much you want to spend. Most vendors that I deal with are putting 4GB as a minimum on low-end systems and 8GB on mid-tier new systems.

If you’re not buying SSD drives in all of your new computers, you need to talk to whoever is responsible for purchasing computers and change that now. Yes, SSDs cost more, and they increase the cost of new computers. However, the $35 per month savings in salary I just showed you, over the typical lifetime of a desktop/laptop computer, more than covers the cost of the upgrade on a new system.

On an existing system, the cost is still very easy to justify with the increased productivity of the end user. And, most SSD manufacturers make the transfer process fairly painless. As an example, Samsung’s Data Migration software does all the work for you without requiring that you re-provision the OS and reinstall software. Just install the software, connect the drive with a USB dock, transfer the data, and swap the drives. Your customers are going to be shocked by the speed increase if you upgrade them to SSD drives—especially if you’re replacing 5400 RPM drives in laptops.

Even if replacing hard drives is out of the question, check that existing systems are defragmented properly. Windows 7 and later should automatically defragment, but some organizations occasionally remove or change the schedule leading to degraded system performance.

Watch for other hardware issues

Be on the lookout for BIOS and driver updates that may improve system performance. Computers often go out to customers with the BIOS that the device shipped with and the drivers that were downloaded when the OS deployment was built. How often do you update the BIOS or drivers on computers once they’re out the door and in the hands of the customer?

Also check the BIOS boot order on systems and ensure that systems are skipping things the user shouldn’t be booting from without IT assistance. Most end users aren’t going to need to boot from CD or USB; having bootable media connected can cause the system to attempt a boot from that device, slowing down the process.

Windows installs can become bloated by things such as updates, software installs, software uninstalls that don’t remove everything from the Registry or file system, malware infections (that have, I hope, been cleaned up), and more. If you’re going to be upgrading computers with SSD drives or more than 4GB of RAM, you may want to consider completely reinstalling Windows rather than keeping the existing install. It’s also a great time to make the jump to 64-bit/x64 Windows if you’re running 32-bit/x86 since there’s not an upgrade path from 32- to 64-bit other than a complete reload.

A word of warning: a number of software vendors peddle software that will “speed up your PC,” “fix Registry errors,” or “clean the Registry.” In most situations, these applications aren’t doing anything that you couldn’t either do yourself or fix more permanently with an OS reload.

If reinstalling the OS isn’t an option, or if you’re working with computers that come with an OEM install of Windows, you should also be on the lookout for unnecessary startup programs and services. Many drivers like to install startup programs that, in many cases, are completely unnecessary for the driver to function. Some third-party applications also like to install “launchers” that may speed up the launch of the application but ultimately slow down system startup and eat system resources while the application isn’t running. Autoruns from Microsoft is a great utility for finding and disabling startup programs. 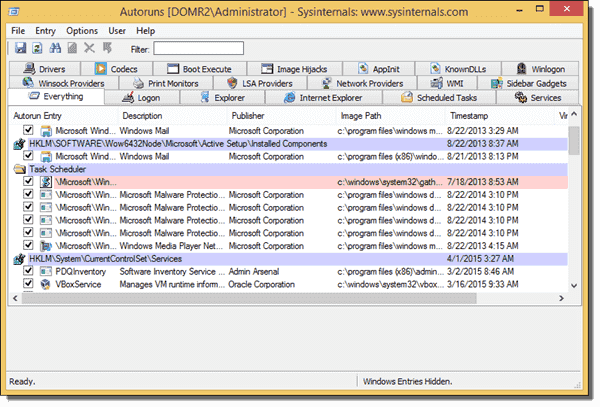 If you’re running Windows 7 (and most of us are), install KB2775511 now! This hotfix has a number of enterprise-specific updates, including improvements in Group Policy and Group Policy Preferences processing, that improve startup times.

I know it is shocking, but antivirus/antimalware software can impact system performance and slow down system boot and login. If you’re running McAfee VirusScan, make sure you’ve upgraded from version 8.7 because later releases have significant performance improvements. If you’re running another antivirus vendor’s product, check with the vendor and see if it has engine or product updates that address performance.

Slow access to Domain Controllers (DCs) is another issue that can cause systems to have slow startup times. Ensure that DCs are on reliable high-speed connections and that things such as DNS and Sites are properly configured.

Roaming Profiles and Folder Redirection can have a significant impact on user login and logout times. Newer technologies such as User Experience Virtualization can roam application settings for users, whereas Work Folders and/or OneDrive for Business ensure that their files are both backed up and available from multiple computers.

Group Policy seems to get the blame quite a bit when it comes to system boot and login issues, but you might be doing some things that are impacting startup.

First, check and see if you’re using “Always wait for the network at computer startup and logon,” found in Computer Configuration > Policies > Administrative Templates > System > Logon. Setting this policy forces synchronous Group Policy processing. Normally, Windows doesn’t use synchronous processing. It uses data that it has cached from the DC and applies policy as the network becomes fully available. By setting this manually, you’re forcing it at every reboot and login, which slows things down.

Don’t use “Always wait for the network at computer startup and logon.”

Network issues can quickly become the cause of slow boot and login times. Ensure that all your Windows clients have properly configured the DNS that points to your DCs. Also ensure that firewalls between your client systems and DCs aren’t blocking ports necessary for authentication and Sysvol access because both can cause slow logons.

Check out other resources

Keep up with the times!

As organizations are finishing up their migrations from Windows XP to Windows 7 and looking forward to either Windows 8 or even Windows 10, you need to be cognizant of changes in the OS and how those changes impact boot and login times. My preference is to wipe the slate clean when it is time to deploy a new version of an OS. This gives me the opportunity to evaluate what worked well and what didn’t, so we avoid repeating the same mistakes with the next OS deployment.

Did you carry forward Group Policy and other OS configuration from Windows 2000 to Windows XP? What about when you moved to Windows 7? Are you still doing things the way you did five years ago? How about 10 years ago?