What are PST files for?

The personal storage table (PST) file format is a proprietary message file format specific to Microsoft technologies. It allows storing copies of messages from Microsoft email solutions, such as Exchange Server and others. It grew in popularity years ago as it offered a way to both archive copies of emails and provide local copies, as opposed to storing them on the email server.

As mailbox quotas were introduced and enforced, PST files were often used to provide access to large amounts of emails without the restrictions imposed by a server quota at the mailbox level. Additionally, back in legacy versions of Exchange Server, administrators used PST files as a way to archive copies of mailboxes.

Space is no longer a limiting factor with respect to the email storage provided in cloud email solutions, such as Office 365. The storage offered is usually sufficient for any general-purpose email the user works with; in addition, the storage space is large enough to store the contents of the user's PST files. When more space is needed for a particular user, the storage is easily expandable with a few clicks in most cloud environments. So, as you can see, space is no longer an issue regarding the use of PST files.

PST files are very prone to corruption, which can lead to increased support requests and even data loss. Additional challenges can result from compliance regulations. And simply being able to keep up with the location of all email data for a particular user is a challenge in itself. PST files can be created and utilized with no real structure or planning for their use. This can lead to PST files being created all over the network, which makes it difficult to have the visibility needed for proper management.

What are the native Office 365 PST migration options?

Microsoft offers the following methods to migrate your PST data to the Office 365 cloud:

The methods supported natively by Microsoft are cumbersome to say the least, requiring you to first upload your PST files to an Azure location or send in a drive containing your files and have these copied to Azure for you.

PST Migrator is a self-contained executable that does not require an installation, making it very portable. Aside from its ability to run in a "sneaker net" fashion, running the program ad-hoc, PST Migrator can be deployed effectively in larger environments with many users using the following methods:

As noted in the deployment details, the PST Migrator tool can be run ad-hoc either by running the executable or by some automated means, such as deployment through group policy. Running the tool on a single machine under your logged-in user helps you to get an idea of what PST Migrator can do.

In the screenshot below, you see there is a PST file mounted in Outlook. The Outlook profile is connected to an Office 365 Exchange mailbox. When the PST Migrator for Outlook.exe file is executed, the process begins migrating data between the mounted PST file and the Office 365 inbox.

Files contained in the PST Migrator for Outlook ZIP package

When PST Migrator is executed, the tool creates a folder structure based on your configuration in either the mailbox or the online archive. It then recreates the folder structure found in the PST underneath. Email items are migrated in real-time between the PST file and your Office 365 inbox. You will see messages leaving the PST file if you monitor the items it contains. 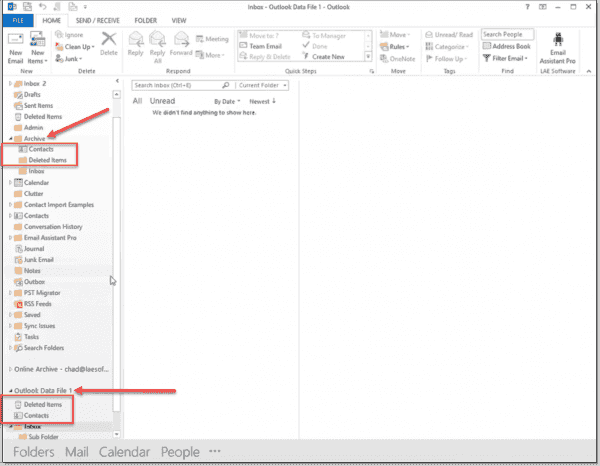 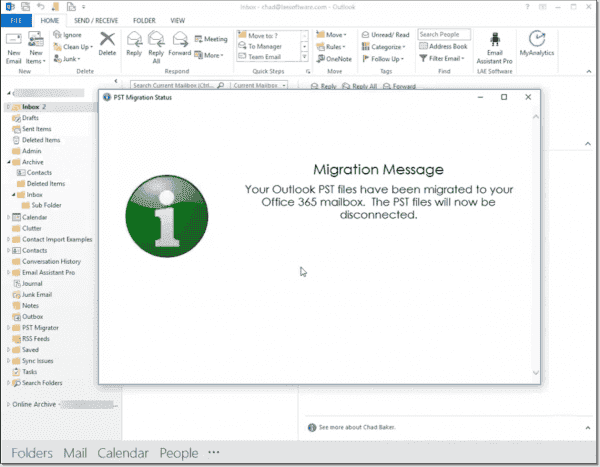 If you are planning a migration to Office 365 for your organization's email, managing and migrating PST files can present a tremendous challenge. However, PST Migrator provides a really easy way to migrate the data contained in PST files to your Office 365 environment.

It works well with automated deployments by means of group policy and other tools. The migration itself happens in real-time during the logged-in user's session. It also notifies the user when the process is complete and cleans up the connection to the legacy PST file.

While there are a couple of native PST migration capabilities found in Office 365, PST Migrator provides an easy, single-step approach to migrating your data, unlike the need to first copy your PST file data to Azure and then perform the import.