If domain controller replication is not working

Home Blog If domain controller replication is not working

Jim Jones  Fri, Aug 23 2013Fri, Aug 23 2013  active directory  8
I’ve recently found myself working on an interesting issue where I was working to spin up a new domain controller in a brand new site, promotion went just fine but the initial replication failed.
Contents

What initially tipped me off that there was an issue is that while the DNS Server service was running, when attempting to access to the console it would say the DNS server wasn’t running. Further accessing any of the Active Directory management tools was exceptionally sluggish and neither the sysvol or netlogon shares were created on the new DC. 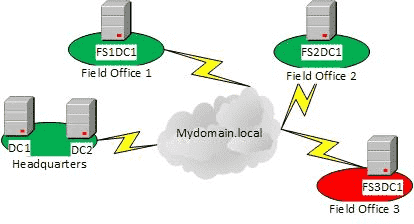 After working this myself for a while I ended up contacting Microsoft support and eventually found the issue to be one which doesn’t have a publicly accessible knowledge base article for but evidently is documented internally. In this article I’m going to outline the specifics of the issue, the commands that I found helpful in troubleshooting the issue, and finally what ultimately fixed the issue.

A good starting point is probably to be able to visualize the network, so please refer to the network diagram above. In my situation all domain controllers are meshed with replication connections to each other. Field office 3 is a brand new location so a new site and subnet were setup first and then a Windows Server 2008 R2 server was spun up in that subnet. After installing the Active Directory Service role and running dcpromo, which had zero errors through the process, is when I began to see the issues described above. Further inspection showed that no site connectors were created on the server in AD Sites and Services. The following errors also showed up repeatedly in the event log:

Once the problem was as fully defined as possible, both by myself and Microsoft support engineers, the troubleshooting process began. Before contacting support I took the generic step of trying the process of demoting and then re-promoting the domain controller again with no noticeable effect. After contacting support I was honestly surprised that this seemed to be a staple of troubleshooting for them as well, because at each tier of support that I worked up this process was done again; in total domain dontroller promotion was performed on this 4 times. Once we got past that provided quite a bit more information. These include:

Once that’s done I again ran the repadmin /kcc * to create the correct site connections followed by repadmin /syncall. After replication finished I noticed that the local DNS server was functioning correctly and that the sysvol and netlogon shares had been created on the server. Next I ran the repadmin /replsum command again and saw that successful replication had occurred. Finally I was able to logically move the server back to the correct site and everything functioned normally.