I never really believed that web apps would be a serious threat to Windows. But since I’ve seen icloud, I am not so sure anymore. icloud is the service from a Swedish startup Xcerion. XIOS (Xcerion Internet XML OS) is the operating system on which icloud is based. I had a quick look at the latest beta of version 3. I really am impressed!

I am very enthusiastic about the Web as an information resource and publishing platform, but when it comes to online apps, I usually prefer real programs running on my desktop that store their data and settings in the cloud. However, icloud is quite unlike any other web app I have ever seen. Its key difference from other web-based apps is that you work in an environment that is very similar to a common Windows desktop. When I first logged on to icloud, I thought, it’s just some kind of Terminal Server session which runs in a Web browser. But it’s not.

It is possible to access the source code of the corresponding web page. It’s mostly XML with a little Javascript. You start applications with a double click on the desktop icon just as you would under Windows. The look and feel of the applications is not at all like web applications. You can drag their windows just as on a Windows desktop, you can minimize them to the taskbar, you can resize them, and they can overlap. 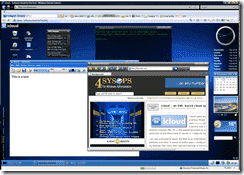 The difference from Silverlight and other Rich Internet Apps (RIAs) is that you don’t just launch a single program via the Web that runs on your desktop. Instead, you have a completely new cloud-based operating system with a command-line interface, a file manager, a web browser, and everything else that belongs to a desktop. There is even a media player which allows you to listen to Internet radio. The quality of the sound is the same as a standard media player running on a desktop.

I think this is the main advantage to a Terminal Server environment. One of the biggest downsides of RDP and ICA was always that these protocols are not really able to transfer multimedia content to desktops. Citrix promises some improvement since the early days of Winframe, but until today this didn’t really solve the problem.

The concept behind icloud is different, though. Since part of the application runs on the desktop, you can have the advantages of both worlds (desktop and online) without having to bear their disadvantages. You can log on to your desktop from every machine with a web browser, and you will always find your personal environment with your own data.

icloud has just one really serious problem. There are only a few applications available at the moment. People often forget that the most important part of an operating system is not its own features, but the programs that are available for it. Actually, in my view, this is the only thing that really counts. Thus, the main job of an operating system vendor is to convince as many third parties as possible to support their platform. This is what made Microsoft big, not the features of their operating systems.

Xercion is relatively a small company. Therefore, it won’t be easy to attract developers. However, chances are high that Xercion will be swallowed by a bigger fish, sooner or later. I also think, Microsoft and Co. will try to imitate some of the XIOS features. Who knows, Midori, the post-Windows OS Microsoft is allegedly working on might be something comparable.