Sander Berkouwer  Thu, Sep 5 2013Tue, Nov 26 2013  fault tolerance, hyper‑v, virtualization  7
In this series of four parts, I will show you how to implement an easy and affordable failover Hyper-V cluster based on two Hyper-V Server 2012 nodes, one Windows Server 2012 domain controller, and one Windows Server 2012 box, offering shared storage and based on the iSCSI protocol. This first part introduces the software and hardware requirements. I’ll also share the specs of my four machines, so you’ll have an idea of what hardware you could use.
Contents 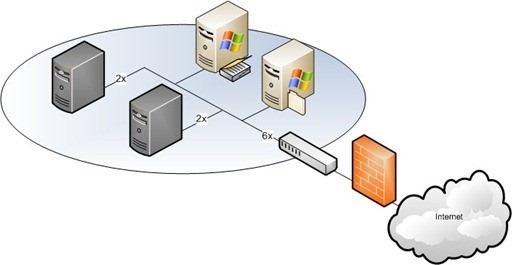 As the introduction already gives away, I’m making some design choices for this series. Below is the summary of these choices:

As hardware for my setup, I chose four Dell XPS 420 rigs, with the following specs:

Although they are not the most cost-efficient or most recent hardware models to use for this setup, I know these trusty little machines will perform their best. The rigs are interconnected using a Dell Gigabit switch, connected to the Internet through a firewall. Their built-in support for RAID1 might also prove useful.

Choosing the right hardware for your nodes
There is a whole range of consumer products you can use as your Hyper-V nodes. When you go and look for hardware for your fast and easy Hyper-V environment, make sure it meets the following specifications:

Several tools are available to check your hardware for compatibility with Hyper-V:

Further requirements for the nodes are the availability of two Network Interface Cards (NICs) to separate storage and management traffic from virtual machine traffic. Although one NIC suffices for the purpose of demoing Live Migration, additional NICs and/or Host Bus Adapters (HBAs) will make your life easier and increase the performance and reliability of the cluster, especially when you offload your storage traffic to a dedicated HBA.

Choosing the right hardware for your storage box
Speaking of storage traffic, your storage box should offer sufficient storage space to store your virtual machines. While you might think Windows Server 2012’s data deduplication could potentially be a solution here, it’s not designed for this scenario. Storage Spaces, however, are. You can use this technology to further expand on available storage when you add more spindles to your storage box.

If you want to be really savvy in terms of storage traffic, I suggest you look at 10GbE Network Interface Cards (NICs) that support Remote Direct Memory Access (RDMA). While a bit on the expensive side, their cost is still nowhere in the same ballpark as dedicated fiber channel HBAs.

Technically, there are no differences in the way these three flavors offer Hyper-V and failover clustering on the scale of this series. The differences between them is their licensing:

Choosing the right software for your storage box
I’ve also made the choice to use Windows Server 2012 as the operating system for my storage box. As an alternative, you can also use Rocket Division’s StarWind iSCSI Server Free to offer iSCSI from earlier versions of Windows Server. Note, however, that StarWind iSCSI Server Free limits your Hyper-V failover cluster to two nodes.

Throughout this series, you will need the following:

Before you start with the next part in this series, use the information matrix below to keep an overview of your host naming scheme and IP networking information:

In my next post I will discuss Hyper-V cluster nodes.