Paul Schnackenburg  Thu, Dec 12 2013Thu, Dec 19 2013  hardware, windows server 2012 r2  0
I recently was looking for a suitable server for Windows Essentials Server 2012 R2 and after some research it seemed that the recently released HP Microserver Generation 8 would be a good candidate.
Contents

In the next three posts I will look at what’s new in Essentials Server 2012 R2 as well as how well the Microserver works as a platform for a small business server.

Previous generations of the Microserver have been popular with geeks looking for a Windows (anyone remember Windows Home Server?) or Linux home server / media server due to its combination of “server” class hardware and small form factor. The new generation comes with two HP Gigabit network adapters, a HP iLO 4 (integrated Lights Out) network port for out of band management and a Matrox G200 graphics adapter.

There are five USB 2.0 ports, two on the front, two on the rear and one internal one. There are also two USB 3.0 ports on the back that are only operational once an OS and drivers are installed. Note that there’s no audio card built in – nor is there space for a beefy graphics card, this server is not a media player. 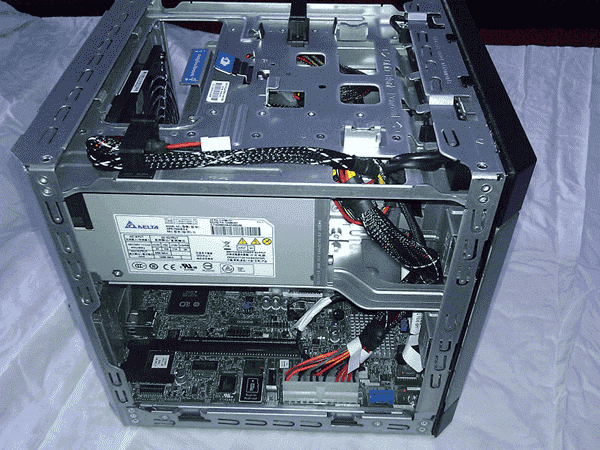 The Microserver packs a lot of punch in a small package and is an excellent choice for small, small businesses.

Storage is in the form of four non hot-plug SATA 3.5” slots that backs onto a HP Dynamic Smart Array B120i Controller. This controller has two 6.0 Gbps SATA slots and two 3.0 Gbps slots and the maximum supported disk size is 3 TB. The main drawback of this RAID controller however is that it ONLY supports RAID 0 and 1 due to the lack of inbuilt memory.

If you want RAID 5; which would make sense in a small business scenario where you don’t want to waste half your disk space for mirroring, nor quadruple your chance of data loss by going with RAID 0; you have to use up the only PCI Express 2.0 x16 slot and upgrade to another RAID controller that costs almost as much as the server itself. I didn’t realize this limitation until I was trying to setup a RAID set as even cheap desktop motherboard RAID controllers offer RAID 5 today.

So my workaround was to install an SSD in the top compartment where normally a slimline laptop DVD drive would be housed which required a bit of wiring trickery as the supplied cable is a floppy disk (!) power cable. With the OS installed on the SSD I could then proceed to use Storage Spaces to create a parity space which is the equivalent of RAID 5, in my case with 4 x 2 TB WD Red SATA drives the usable space is 5.45 TB. 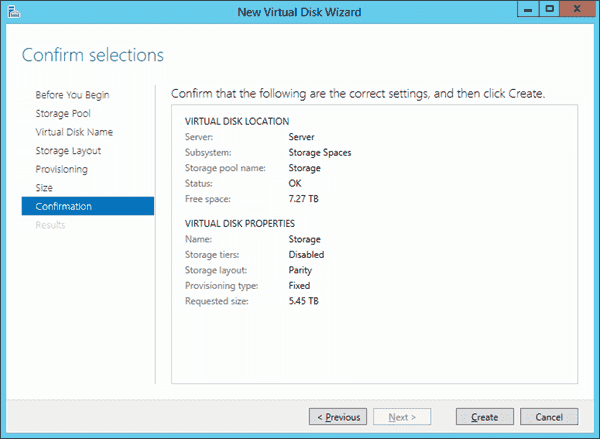 Setting up a storage space with inbuilt data protection is a cinch in Server 2012 R2 and remember – this is modern data storage, not the old fashioned software RAID from yesteryears.

The next challenge was installing the OS, since Intelligent Provisioning doesn’t yet support Windows Server 2012 R2. With this technology all the required drivers for the HP hardware are provided during the installation so there are no problem with NICs and storage controllers.

In my case I had to revert to the old fashioned way of doing things by providing the storage controller driver on a USB stick during OS installation and then proceed to use HP Software Update Manager (SUM) to provide all the other required drivers, before completing the Essentials part of the installation.

All drivers are available in an interim software pack for Windows Server 2012 R2 until Intelligent Provisioning with full support becomes available in early 2014. For more information see this PDF and these forum posts.

The low powered CPU isn’t an issue as most small business servers don’t use the CPU heavily. In day to day use the server is excellent, quiet (except during startup) and solid as a rock. I can definitely see this server in a small business environment as long as the limitations of the RAID controller are taken into account. HP also offers an 8 port managed (!) switch with the same form factor as the server so it can be stacked on top or below it.

In my next post, I’ll look at what’s new in Windows Server 2012 R2 Essentials.