In Part 1 we extended the forest and domain schema in preparation for the first 2008 R2-based DC, and now in Part 2 we’ll create and fire up the new DC.

James Bannan is Senior Technical Consultant who specializes in deployment, virtualization and management.

The big question was whether to create a virtualized domain controller or not. There are obvious concerns with going down this path in terms of redundancy and reliability, and particularly if the underlying hypervisor is a member of the domain, but after reading this article by Virtual PC Guy Ben Armstrong, I’m quite comfortable in taking this approach. With suitable precautions, of course.

Because the DC is running on Hyper-V, here’s the basic rundown of critical steps to take: 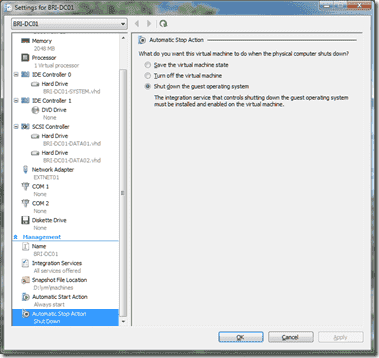 The other consideration is what resources are needed. A Server 2008 R2 dedicated domain controller which doesn’t do anything else (recommended) will happily bumble along on 1GB RAM and a small amount of drive space. Of course, you can always throw more RAM if necessary. Of greater concern is disk allocation. Again for the sake of redundancy it’s nicer to be able to spread the AD load around, and for that reason I chose to add a couple of 10GB fixed-size VHDs to the system and attach them to the Hyper-V SCSI controller. With the OS I assigned them to drives M:\ and N:\ so that they couldn’t accidentally interact with any other hardware added later. Then during the dcpromo stage of Active Directory configuration, I pointed the NTDS database to M:\ and the NTDS logs to N:\.

Fixed-size VHDs are pretty much mandatory in this environment. Dynamically expanding VHDs don’t give the same performance as fixed-size, and differencing disks aren’t supported for domain controllers – they’re also a bad idea as it creates a potential point of failure. Unless you’re supporting a massive AD environment 10GB VHDs are more than sufficient (probably overkill really) but if you need to expand in the future then VHD Resizer will do the job.

One thing – I had some issues with this particular virtual machine about a week ago, and it turned out to be an dodgy physical network card in the Hyper-V parent. Because this caused no end of problems and eventually resulted in me having to strip out the DC from AD and start again, this time around I was paranoid and took a complete copy of the VHDs before starting the dcpromo. Nothing went wrong, but half an hour spent in creating a roll-back position was worth it.

In the third and last part of this tutorial, with all DCs running Windows Server 2008 R2 we’ll migrate the AD functional level and take a look at some of the new benefits and features.