How to safely clone a domain controller

Home Blog How to safely clone a domain controller

Paul Middleton  Wed, Feb 3 2021Mon, Feb 8 2021  active directory, backup  1
Modern Windows versions allow you to safely clone a domain controller and even put it on your production network so that it can be used as a target for LDAP queries, PowerShell or .NET commands, and even DNS lookups/referrals. 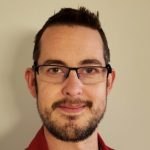 Paul Middleton
Paul Middleton has been an IT professional for the past 20 years. Starting out as an IT support analyst in the UK, he moved onto being a systems engineer specializing in Microsoft core technologies such as Active Directory and Exchange. He is now based in the US and manages an infrastructure team supporting a large multinational enterprise. He is a subject matter expert in many infrastructure technologies.

Selecting a domain controller for cloning ^

The first step is to find yourself a clean domain controller. You need to select one that meets as many of the following criteria as possible:

If you cannot find a suitable cloning candidate, a good, safe option is to build a new temporary domain controller. Don't install anything on it at all, but transfer the FSMO roles to it if you can. Then you do not have to worry about removing software and reinstalling it later, or powering down domain controllers that might be in use by somebody somewhere.

Once you have selected a suitable candidate, there are a few things you'll need to do to make this run as smoothly as possible.

First, if you use multiple accounts for administration and user functions, make sure you know your domain admin password before you start—and that it's not about to expire! This might just save you having to start again later on.

Second, add the computer to the AD group named "Cloneable Domain Controllers". This group exists as of Windows Server 2012. It's not strictly necessary for this type of clone, but it might give you a smoother ride, especially if you plan to move the clone to different hardware. We just need to remember that when we're done, this membership needs to be removed, as there are some security implications.

Third, make sure your chosen domain controller holds all the FSMO roles so you don't have to seize them later. The easiest way to check is by typing "NETDOM QUERY FSMO". You can also check with PowerShell if you prefer: 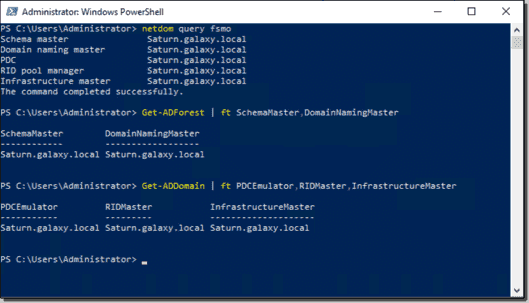 If you need to transfer the roles, run the following PowerShell line:

Verify the move was successful before proceeding. 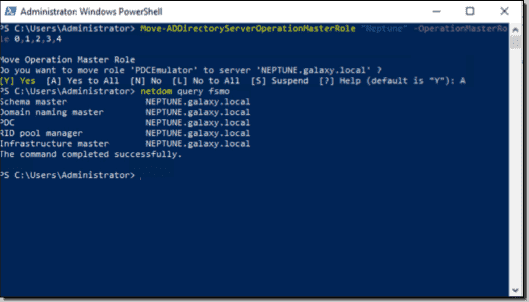 Finally, shut down the domain controller. You don't need to make a backup since we're not planning on making any changes to this copy.

Send in the clones ^

Now we're ready to start the cloning. How we do this depends on the source system. Ideally, we're working on a virtual machine. If so, then you can use the clone function of your hypervisor to create a copy of the server. For VMware, you'd right-click and select "Clone to Virtual Machine". For Hyper-V, you'd need to export the VM and then reimport it as a new VM.

Whichever option you use, make sure you disconnect the NIC of the target VM during clone or import. You don't want it booting up and getting back on the network with the same name as your source DC. The longer it takes to spin up your new DC, the worse the resulting problems can get.

If you're using a physical machine, you've got an extra bit of leg work. A good option is to boot from a CD or USB drive running a VMware cold clone and P2V the physical server into a VM. I'm not going to cover that here, but I'm sure your search engine of preference can help you with that.

Now that we have a new domain controller and it is sufficiently disconnected from the network, let's clean up after ourselves a little and get the source DC back online. Start up your source DC again. If you transferred any roles to it before you began, transfer them back where they need to be using the same process described earlier.

If you built a temporary domain controller, you can now demote it back to a member server and begin the decommission process. If you used an existing domain controller, remove it from the "Cloneable Domain Controllers" group. Your environment should now be back to how it was before you started.

So now all traces of our tinkering have been removed from our production environment. Let's focus on the clone and get this thing running.

First, we need to get it on an isolated network where it can only communicate with whatever we allow. You're probably going to need your network or security team to do this. The first thing we need to do is allow only RDP traffic in TCP and UDP 3389. This means we can RDP instead of using the VM console. All other inbound and outbound traffic should be blocked. If you're comfortable with the Windows firewall, you can set that up instead—but it's a lot of work and there's more room for error.

Once that has been done, start your domain controller and give it an IP address. Send a few test pings out to make sure the firewall guys haven't messed anything up. It shouldn't be able to successfully ping any other DC. Try the same in reverse; no domain controllers should be able to ping it.

Now you can RDP in to make things a little easier. All that's left to do at this point is to tidy up a little.

Last bit of tidying up ^

Most of this is optional, but I'd recommend it if you want to keep your event logs of your new cloned DC free of a constant stream of useless errors.

Seize all the FSMO roles forcibly if you didn't transfer them before you started.

Delete all the replication links between all the (now unavailable) domain controllers. 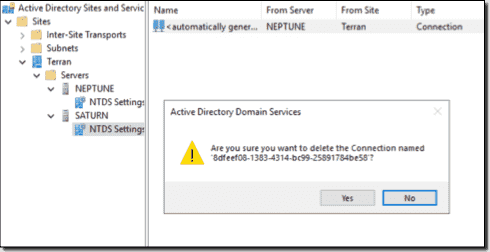 Delete the NTDS settings from the unavailable domain controllers. 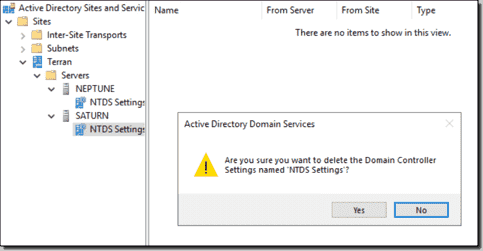 When prompted that the server is a global catalog, choose to delete anyway. 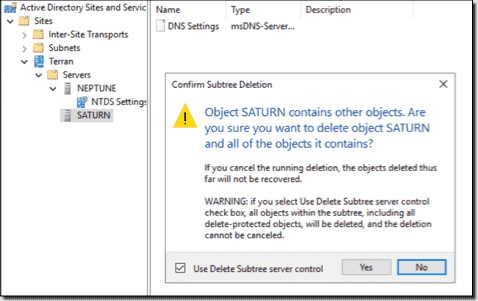 You'll want to repeat these steps on all the other domain controllers in that AD site.

You now have a perfect replica of your live production environment that your developers can play with to their hearts' content, safe in the knowledge that your Active Directory is protected from any bad code and cowboy antics.