How to remove the Store app in Windows 10

Home Blog How to remove the Store app in Windows 10

Why to disable the Store app ^

In my view, it is IT management’s task to decide which apps users have access to, and it is the system administrator’s job to deploy these apps. This is essential to maximize security and productivity in an organization.

The Windows Store is certainly a good thing, but it is a Windows feature for the consumer market. Thus, in a corporate network, you want to ensure that end users are unable to run the Store app and install apps from unknown and unverified sources. Unfortunately, this is not the default configuration of a domain-joined Windows 10 computer. However, Microsoft offers several methods to remove the Store app.

The most straightforward way is via the Group Policy Turn off the Store application, which is available as a Computer and User configuration. You can find the policy in Policies > Administrative Templates > Windows Components > Store. 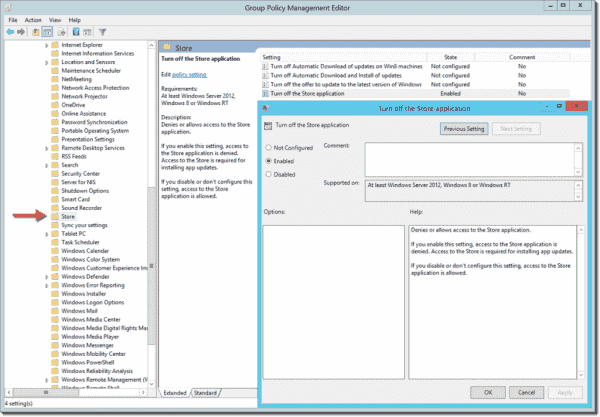 If you don’t see the Store policy folder, for instance on a Windows Server 2012 R2 computer, you first have to download the Administrative Templates (.admx) for Windows 8.1 Update and Windows Server 2012 R2 Update. The ADMX templates are packed into an MSI file that will copy the new policy definitions to C:\Program Files (x86)\Microsoft Group Policy\Windows8.1-Update\PolicyDefinitions when you execute it. 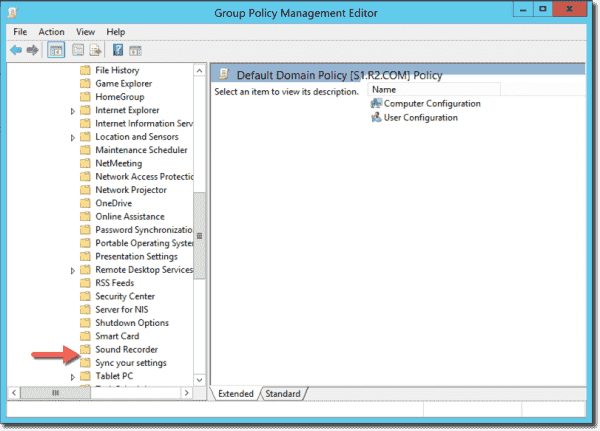 From there, you can copy the templates to C:\Windows\PolicyDefinitions or to your Group Policy Central Store. You can overwrite the old ADMX and ADML files with the new ones.

If you just want to add new Store policy definitions, you only have to copy WinStoreUI.ADMX and WinStoreUI.ADML. The ADMX template belongs in the root of the PolicyDefinitions folder; you can find the correct ADML file for your language in one of the language folders.

Note that the Store policy definitions are not included in the new Windows 10 ADMX templates. You also won’t find the policies in a Windows 10 Group Policy editor. However, I tried the Turn off the Store application policy on a Windows 10 machine and it worked just fine.

The message users receive when they then click the Store app differs a little from Windows 8.1. In Windows 10, it is “The store app is blocked;” in Windows 8.1, it was “Windows Store isn’t available on this PC.” The new message is more suitable because this policy doesn’t remove the Store app; it just disables it. 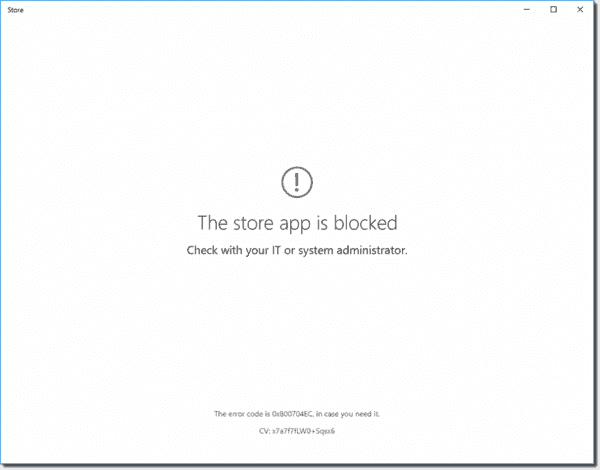 “The store app is blocked” message

Like before, users are encouraged to bother system administrators to allow access to the Store app so that they can install computer games and social media apps. If you don’t want your users to check with your IT for this purpose, you need to take some extra measures.

Note that, if the computer doesn’t have Internet access, the Store app might not work and just show an empty blue screen for a while before it crashes without any further message. 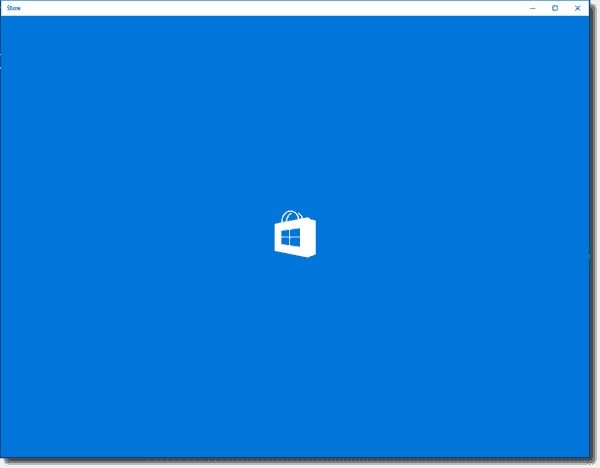 The first thing you want to do is ensure that you enable this policy before you deploy Windows 10 (the same applies to Windows 8.1) because this will significantly reduce the likelihood that you will be bothered by users who want to play with the Windows Store. If a user logs on the first time on a Windows 10 machine where the Store app has been turned off, the app’s icon won’t be added to the Taskbar. However, disabling the Store app doesn’t remove the icon from the Taskbar if it has been added before.

Unfortunately, the policy doesn’t remove the Store tile from Start. You can configure the Start layout with Group Policy, as I described in a previous post. A downside of this method is that users will then be unable to configure Start by themselves.

It is also possible to determine the icons that are pinned to the Taskbar. Doing so allows you to remove the Store app from there if you disabled the Store after users logged on to Windows 10. However, the only method via Group Policy that I am aware of is not officially supported by Microsoft.

I explained the procedure in detail for Windows 8.1 and verified that it still works for Windows 10. Essentially, you have to configure the Taskbar on a reference machine, export the Taskband Registry key to a REG file, convert the REG file to an XML file, and then import the XML file into Group Policy Preferences. 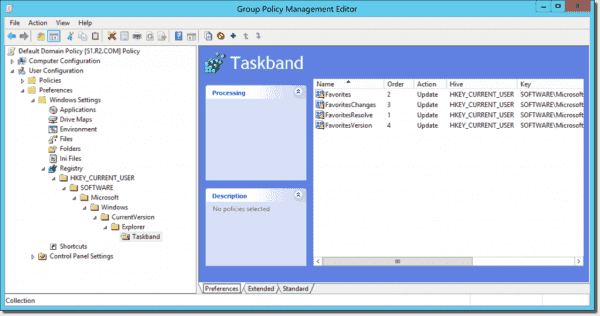 Removing Store app from the Taskbar with Group Policy

An official way to unpin the Store app from the Taskbar is through the User Group Policy Remove pinned programs from the Taskbar in Policies > Administrative Templates > Start Menu and Taskbar. The problem with this method is that users won’t be able to pin any apps or desktop applications to the Taskbar. 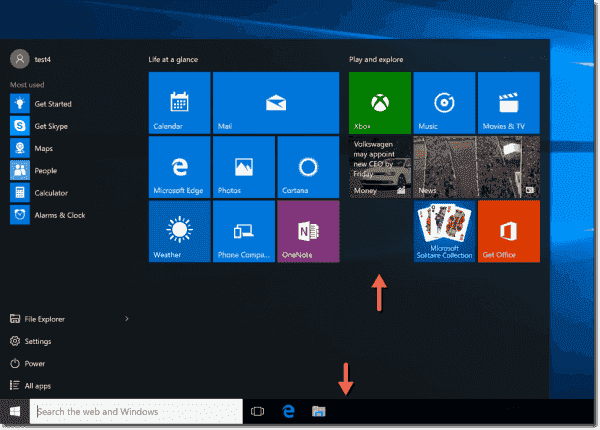 Uninstalling the Store app is only required if it was already installed when the user logs on the first time. If you unprovisioned the app in your reference OS image before you deployed Windows 10, the Store app will not be installed on the corresponding computers if a new user logs on.

You can uninstall the Store app with the following PowerShell command on a 64-bit Windows 10 machine:

This PowerShell command doesn’t require administrator rights, and you could add it to your logon script. I tried to uninstall the Store app via a PowerShell logon script and it worked fine. It doesn’t hurt if the command runs when the Store app was already removed. The user won’t receive an error message.

If the Store app has a different package name, on your Windows installation (Windows 10 32-bit, for instance), you can use the next command to list all installed Windows apps and then grab the correct name of the APPX package:

Note that the command needs administrator privileges. To get a list of all provisioned apps, you can use this command:

If you unprovision the Store app before you deploy your Windows 10 image in your network, you never have to worry about the Store app again.

How do you configure the Windows 10 computers in your organization? Are your users allowed to install apps from the Windows Store?