Kyle Beckman  Tue, Jul 7 2015Thu, Jan 26 2023  hyper‑v, virtualization  55
If you try to run a physical-to-virtual (P2V) conversion on a Windows Server 2012 R2 machine with UEFI, you’ll receive the error “There is no BCD boot device found in the source machine, noticing that the conversion of an EFI boot machine is currently not supported.” In this article, I’ll show you how to bypass that error by converting the server to a VM with Disk2vhd and how to repair the boot record so you don’t get a black screen with a blinking cursor.
Contents

Recently, I needed to convert a physical Windows Server 2012 R2 server to a virtual machine (VM). When the server was deployed, it was configured with UEFI. I downloaded the Microsoft Virtual Machine Converter and ran through the process to start the conversion of the machine after hours. When I got to the very end of the wizard, I received this error: “Microsoft Virtual Machine Converter encountered an error while attempting to convert the virtual machine. Details: There are blocking issues for the physical-to-virtual conversion: There is no BCD boot device found in the source machine, noticing that the conversion of an EFI boot machine is currently not supported.” 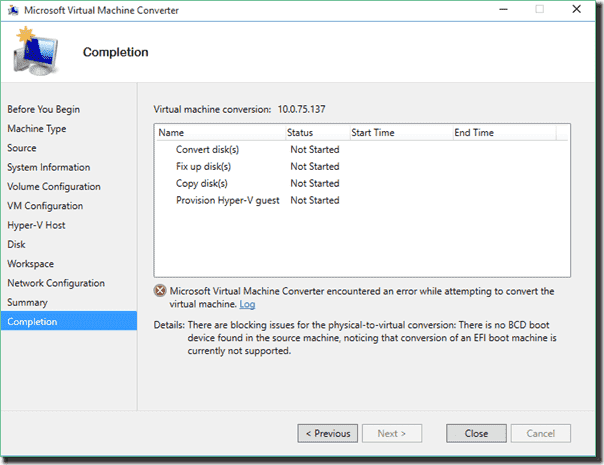 Unfortunately, the Virtual Machine Converter doesn’t support P2V conversions for UEFI computers with GPT disks such as this server. Backing up all the data and performing a full server migration is an option. However, this particular server just had the application on it upgraded. In addition, a full migration would have been very time consuming, especially considering that the specialty application required hours of vendor assistance to install.

Convert the disk to VHDX

The first thing that we need to do is convert the physical disk to VHDX. A great Sysinternals tool from Microsoft called Disk2vhd will perform this task. Download Disk2vhd and extract the executable on the server that needs to be converted. Run the application, set the location where you want the VHDX file stored, and click Create. 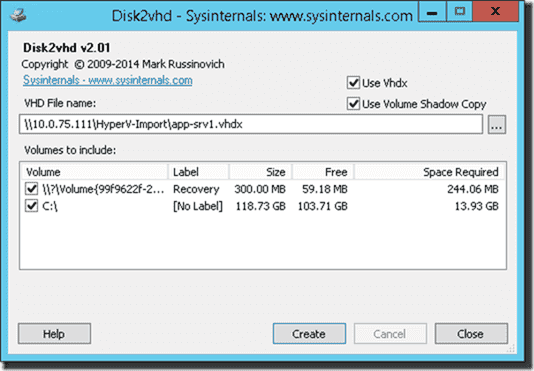 For the VHD file name, I used a UNC path to a temporary storage location that had enough storage to store all the data from the server. After the process completes, transfer the VHDX file to a Windows 8+ workstation.

Convert the disk from GPT to MBR

Next, we’ll need to convert the disk from a GPT disk to an MBR disk. A few different ways exist to do this (including the built-in tools in Windows), but I’ve found that using AOMEI Partition Assistant is, by far, the most reliable way to perform the conversion. In most cases, the Standard edition (that is free) can do everything you’ll need as long as you run it from Windows 8+ and not a server. If you’re working with very large partitions, you may need to pay for the Professional edition.

Using a Windows 8+ computer, mount the VHDX file by right-clicking it and choosing Mount.

Make note of the drive letter that is assigned to the disk after it is mounted. In my case, it was H:\.

View the mounted VHDX file as a drive letter in File Explorer.

Next, open AOMEI Partition Assistant and find your disk. Right-click the disk where it shows Disk Number (GPT) and then choose Convert to MBR Disk. 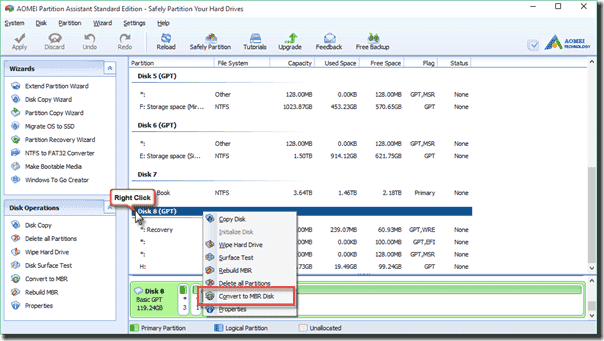 Accept the warning messages and then click Apply in the upper-left corner to apply the changes. Next, right-click each of the extra partitions at the beginning of the disk and choose Delete Partition. 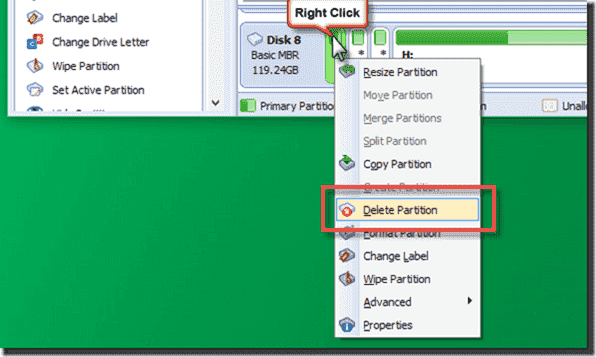 Choose the default option, Delete partition quickly, and then click OK for each. Click the Apply button one last time to apply the change. After the process completes, close Partition Assistant. 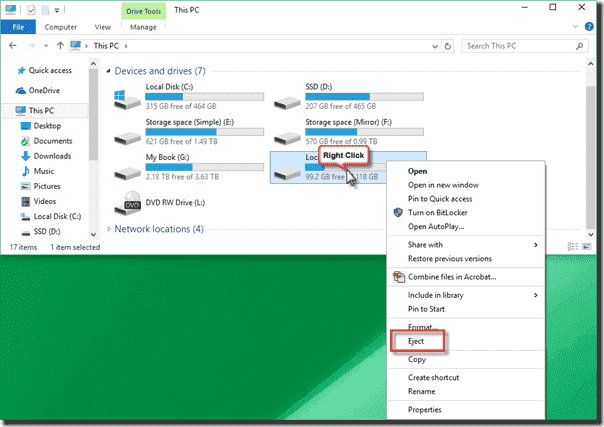 In Hyper-V Manager, run through the normal steps to create a new VM. When creating the VM, make sure that you choose a Generation 1 VM and, instead of creating a new VHDX file, attach the file that was generated by Disk2vhd that we’ve edited.

Assuming you’ve done everything correctly so far, you should be greeted by a black screen with a blinking cursor if you attempt to start the VM that never boots into Windows. 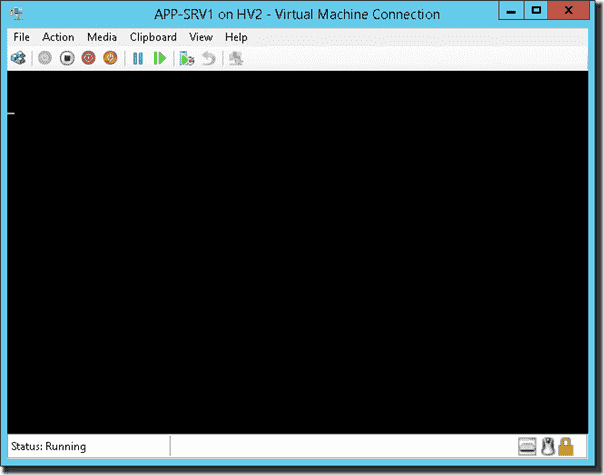 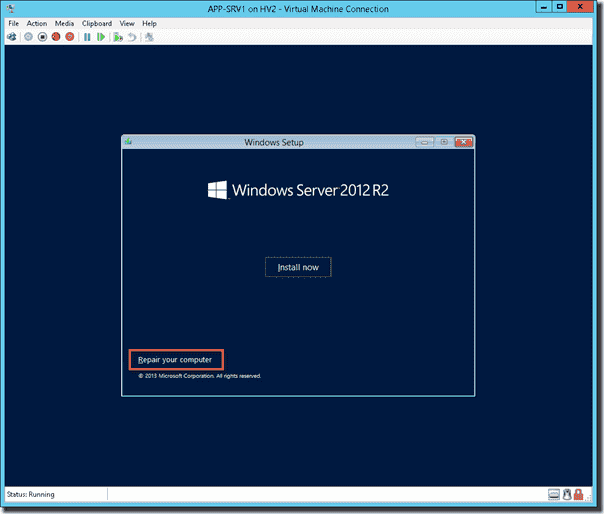 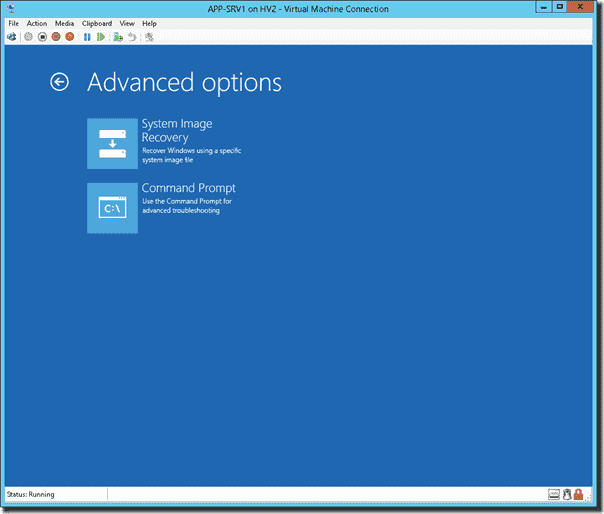 Next, we’ll use diskpart to make the partition on the VHDX active. At the command prompt, run the following commands: 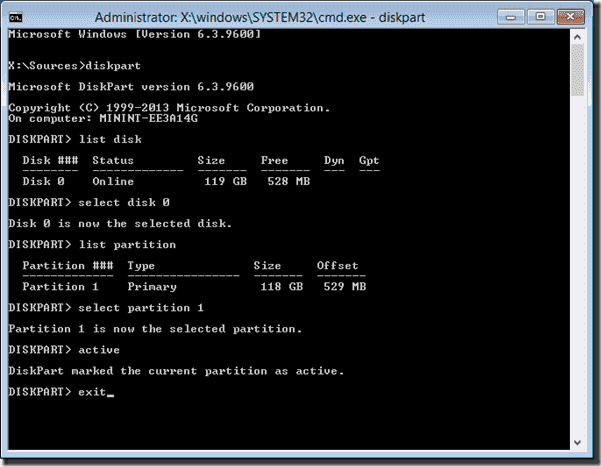 Use diskpart to make the partition active.

Depending on your configuration, you may need to adjust the disk and partition numbers. After setting the partition as active, reboot the VM and boot to the Windows Server 2012 R2 setup ISO again. Run through the same process we used in the last step to get to the command prompt again.

Next, we’ll use bootrec to make the VHDX bootable. At the command prompt, run the following commands: 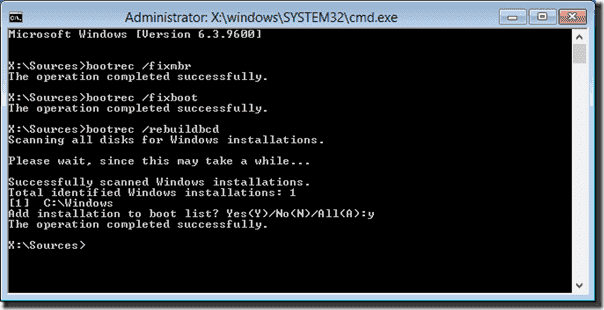 Use bootrec to make the VHDX bootable.

After the final command completes, you’ll be asked if you want to add the installation to the boot list. Type “y” and press Enter. Detach the Windows Server 2012 R2 ISO and reboot the system.

Boot Windows Server and clean up

After rebooting, you should be greeted by a familiar-looking boot screen while Windows adjusts to its new virtual hardware. 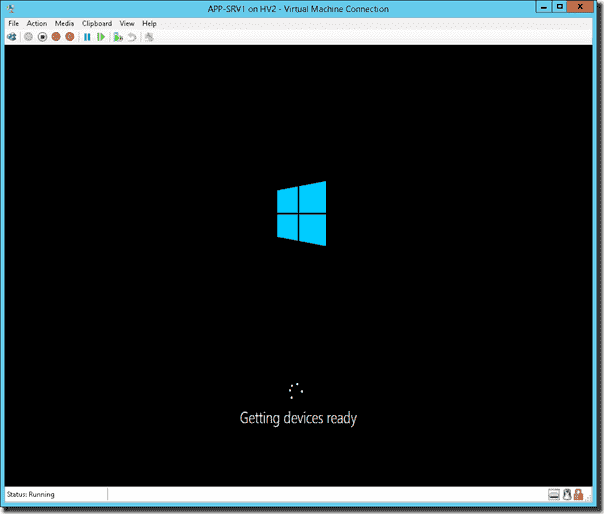 Windows Server 2012 R2 gets devices ready after Disk2vhd and repair.

The last thing we’ll need to do is some cleanup of things the physical server needed that the virtual server won’t need. Open Device Manager and click View, then Show hidden devices. 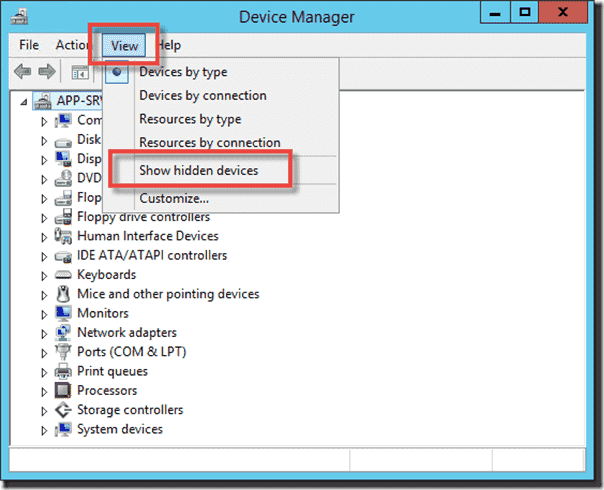 When you expand the different hardware sections in Device Manager, you should now see phantom hardware that has a lighter icon than the existing hardware. 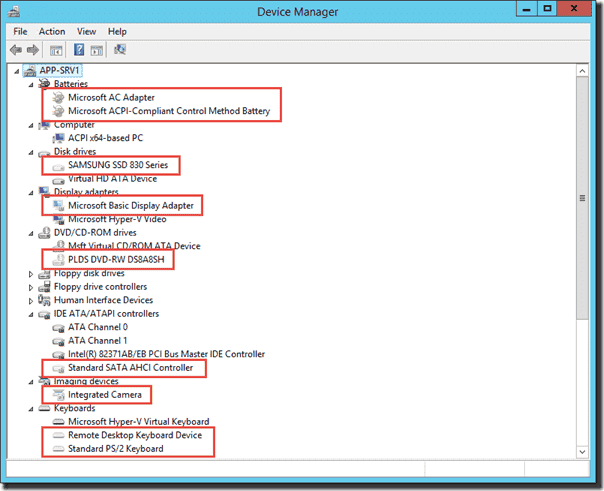 For each of the phantom pieces of hardware, you’ll need to right-click and choose Uninstall to remove it.

Next, you’ll need to go to Program and Features in the Control Panel and remove any vendor-specific software such as NIC teaming tools or hardware management software. Once you’ve done that, reboot the server, re-attach the network adapter to the network, and you’re ready to use your new VM.