How to install Hyper-V on Server Core

Home Blog How to install Hyper-V on Server Core

Where else, other than in Microsoft’s virtualization solution Hyper-V, would you benefit most from a highly available, highly secure operating system with the smallest possible attack surface, yet packed with features like LBFO, MPIO, and ODX? Server Core installations of Windows Server 2012 are the ideal root partitions for Hyper-V.

Note: All the information contained in today’s contribution also applies to Hyper-V Server 2012, the free Windows Server 2012–based Hyper-V host.

To make the most of Hyper-V, you will need the right hardware. The processor needs to be a recent x86-64 one, like an AMD64 or an Intel processor. The motherboard and BIOS should be equipped with hardware-assisted virtualization and hardware-enforced DEP. For maximum performance, the processor needs to support Second Level Address Translation (SLAT). (In Intel processors, this feature is called EPT. AMD labeled this feature NPT in its marketing materials.)

After you’ve enabled virtualization in the BIOS, make sure to cold boot your Server Core installation at least once, since this will actually activate the virtualization stuff.

When you’ve fulfilled the requirements, you can install the Hyper-V role with success.

Note: You can also install the Server Role without meeting the requirements, but then you won’t be able to actually run virtual machines.

To install the Hyper-V Server Role, run the following PowerShell command (type PowerShell at the command prompt if you haven’t done so): 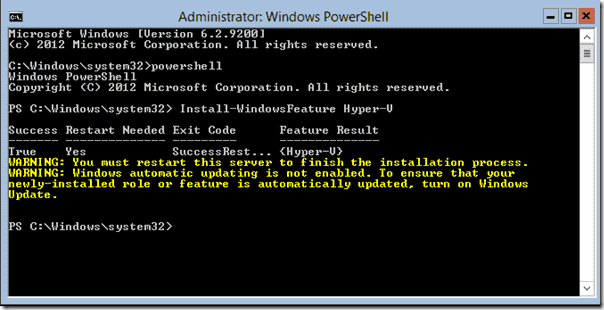 With Hyper-V installed, the foundation is laid on which to build virtual machines. Three methods can be used to create and manage virtual machines on Server Core installations of Windows Server 2012:

As you’d imagine, PowerShell can be used to manage Hyper-V both from the console of your Server Core Hyper-V host as well as from other Windows 8 and Windows Server 2012 installations.

Creating a Hyper-V virtual machine in PowerShell is as easy as typing:

Now, this command will create the virtual machine, but it won’t have a disk, its default network adapter will not be connected to a virtual network, and it will be equipped with the default amount of virtual RAM (512MB) and a single virtual processor. Not that useful.

To connect a virtual machine’s network adapter to a network, we will first have to create that network. The command below creates an internal network (for test and acceptance purposes only, obviously) named Internal:

Now, that we’ve created a virtual network, we can create a folder on the disk of your Server Core installation to place virtual hard disks into. The command below will do that:

The following, more elaborate commands create a second virtual machine that boots from a connected ISO image, has its disk stored in a specific location, and has its network adapter attached to a certain network:

Note: A virtual machine’s BIOS is configured to boot from a connected DVD by default. You don’t need to specify that behavior.

When created, you can start the virtual machine using:

With PowerShell, it’s impossible to connect to the desktop of a virtual machine, especially when it’s installed and connected to an internal virtual network. To that purpose, we use the Hyper-V Manager or third-party tools. 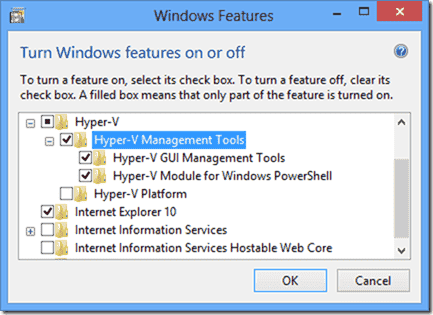 Alternatively, you can use third-party tools to create and manage virtual machines on Server Core. However, since Hyper-V hosts are responsible for hosting virtual machines and, therefore, need to be available and secure, introducing third-party software on these hosts might not be the greatest idea ever.

My tip is to make sure you trust the vendor of the software and make sure the software is in active support, comes with a current roadmap, and has a good (online) reputation. Also, keep an inventory of software installed on Server Core installations, since it’s not straightforward to get this information from the command line. From a procedural point of view, you’ll want to place the software, along with licensing information, vendor (support) information, and installation and basic management manuals, in a central location.

Tools like 5nine’s Free Hyper-V Manager and VT Technology’s vtUtilities are good utilities to get a Hyper-V Management GUI locally on your Server Core Hyper-V host.

Server Core installations of Windows Server 2012 and Hyper-V Server 2012 installations lend themselves as highly available, robust Hyper-V hosts. The array of third-party solutions for local management is an example of how its strength is perceived in the market.