Home Blog How to install Git for Windows

How to install Git for Windows

Timothy Warner  Mon, Jan 11 2016Sun, Jan 17 2016  powershell  0
In this article, you’ll learn how to install and use Git for Windows. Specifically, you’ll combine the Git Windows client and the GitHub cloud service to keep your Windows PowerShell scripts always in sync, no matter where you work.

Even if you work in a team of one, you can still get a lot out of Git. If nothing else, distributed version control systems such as Git give you protected access to your source code from any computer. When I got into IT, the developers I worked with used centralized SCM tools such as Microsoft Visual SourceSafe (now Team Foundation Server). The weakness of centralized SCM solutions is that you had a single point of failure.

By contrast, with Git, all developers have a full copy of a tracked repository. Team members can pull changes from other team members’ repos and/or push changes to a central repo.

Enough preliminary—I want this to be a “quick and dirty” setup guide for those of you who knew you’d have to learn Git eventually but successfully put off the task until today. Let’s get started!

For starters, forget about mSysgit or the Posh-Git project—we finally have a full-featured Git client for Windows. You can download the software from either of the following websites:

I’ll walk you through the important installation dialog box choices and give you suggestions.

Particularly, Git for Windows includes useful extensions, as shown in the following dialog box. The Git Bash environment is particularly cool; it’s a Cygwin-like wrapper that allows you to run Linux Bash commands. (Let’s face it, Git was historically a Linux program. In fact, the inventor of Linux, Linus Torvalds, also invented Git.) 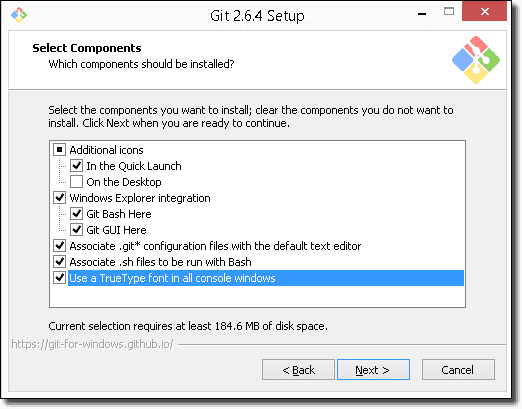 Speaking of Git Bash, I’d recommend that you integrate the Git environment with the Windows console. And, yes, in case you wondered, the integration applies to both Cmd.exe and PowerShell.exe. 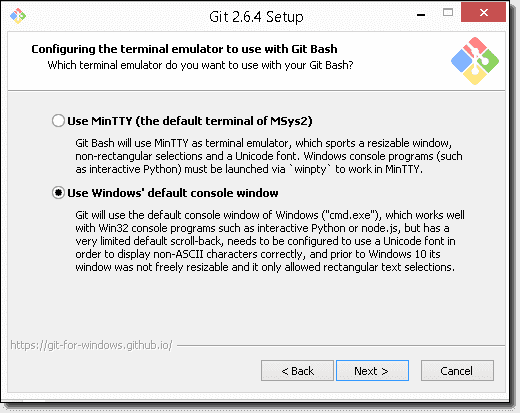 One of the most important choices in Git for Windows is to allow the installer to add the Git tools to your system search path. This way, you can call Git from your PowerShell sessions no matter where your prompt is in the file system. 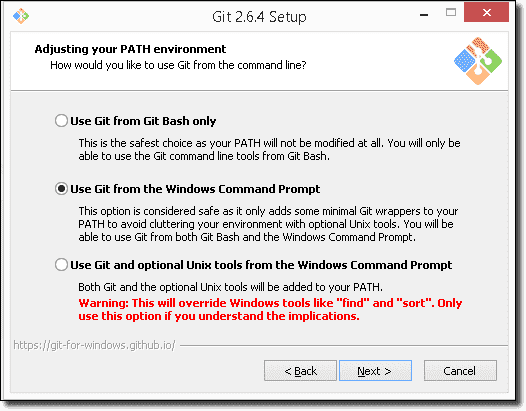 Make sure to add Git to your search path

You may or may not know that Windows and Linux use different line-end escape characters. Your safest bet here is to choose to checkout Windows and commit UNIX line endings. This makes your PowerShell script code easily portable between Windows and, say, OS X systems. 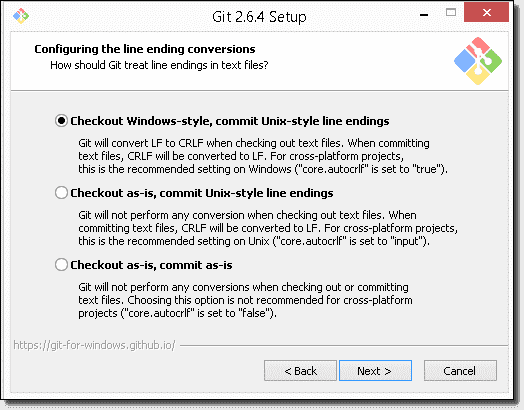 Setting up your development environment ^

Let’s say that we plan to create a big function that will assemble common system configuration information for a given computer. Because we want to see our revision history, as well as make the code available to other developers, we’ll use Git to track our script files.

Open your new script file in the Windows PowerShell ISE and add the following code:

Git tracks source code changes by (a) creating a unique hash value for each commit, and (b) associating each commit with a user identity. Open a fresh, elevated PowerShell console and let’s identify ourselves to Git. Run the following commands, substituting your e-mail address and personal name:

Open a new elevated PowerShell prompt and use cd or Set-Location to switch to the Get-sysinfo folder. Next, run git init:

Git creates the .git hidden directory to perform the metadata and change tracking. We run git status to see how our new repository looks now:

What git status tells us is that we have one file in the folder (get-sysinfo.ps1), but at present the file isn’t tracked. Let’s use git add to change that situation, and then git status to verify:

Note that our script is tracked and staged for commit, but we still haven’t performed the commit that instructs Git to snapshot the file’s content. We use (as logic dictates) git commit for that. The -m switch is highly recommended because any comment we can include that describes the commit will be helpful to you and to other project developers. The “clean” message returned by git status tells me that our repo is up to date.

Re-open the get-sysinfo.ps1 script and modify it into a simple function as shown below:

Run git status and Git will inform you that the get-sysinfo.ps1 file has changed. No surprise there. We can run git diff HEAD to compare changes between the current file and the state of the file at last commit. Forgive the wonky color formatting in the Git console; we can customize that, of course, but we’ll need to cover that in a future article:

To be sure, the previous output isn’t the easiest to parse. You should check out some of the myriad Git GUI front-ends to make file comparisons easier:

Finally, we’ll add the file to our commit “stage” and make a second commit. The dot shortcut adds all files in the present working directory to the staged area:

Pushing our project to GitHub ^

We have plenty of cloud-based public Git repositories available to us (Atlassian Bitbucket springs to mind), but my favorite by far is GitHub. Go there and create a free user account. You can host as many public repositories as you want for free. If you need private repos, then you’ll have to pay for a site subscription.

From your GitHub home page, click New repository and deploy a new repo to host our get-sysinfo project. 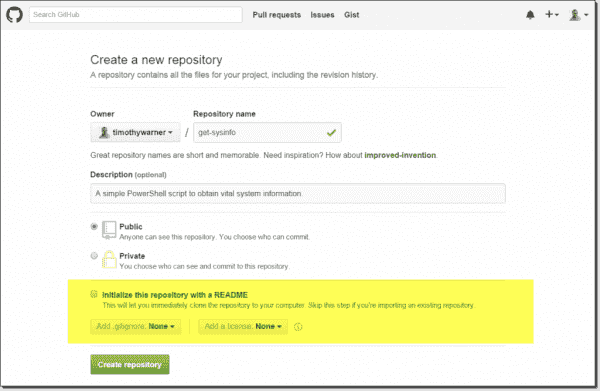 Do you see the highlighted options in the above screen capture? Normally it’s fine to let GitHub create preliminary documentation and whatnot in your public cloud repo. But, in this case, we’re going to push content from our local computer and we don’t want conflicts.

On the next page, you’ll see instructions for adding README and LICENSE files. We’re concerned with our repository .git URL; copy that to the clipboard to prepare ourselves for the next step. 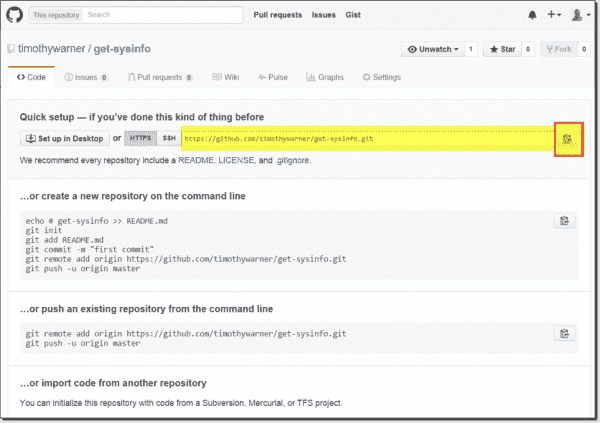 We use git push to upload our full local repository to the empty one waiting in the GitHub cloud:

We’ll finish by going back to GitHub and refreshing our repo page. Done and done!

Now our repo lives in the cloud and on our local computer.

If you’re the curious sort like I am, then you probably have all sorts of questions:

Those are outstanding questions because we literally barely scratched the surface of what’s possible with Git. Let us know in the comments what coverage you’d like to see from us at 4sysops in the future.

In the meantime, I’ll leave you with a few key documentation resources to help you on your Git/PowerShell journey: