How to install File Services on Server Core

Home Blog How to install File Services on Server Core

Sander Berkouwer  Tue, May 14 2013Tue, May 14 2013  file tools, server core  1
While you’d think Microsoft is luring organizations into using their cloud services as the main method for sharing files, most organizations have no need to share files beyond their organization’s borders or to access files in a web browser; as such, most organizations rely on file servers to share files among their employees. Today, I’ll show you how to transform a Server Core installation into a Dynamic Access Control-aware file server.
Contents

Both file sharing and the File Server role have been an integral part of Server Core installations since their first inceptions.

By default, the Storage Services Role Service is the only File Server Role Service installed. This explains the ability to access the hidden and administrative shares (for example, C$) on your Server Core installation.

How to install File Services in Server Core

Before you can install any of the File Server Role Services, you’ll need to install the File and iSCSI Services Role Service. This can easily be done by running the following PowerShell one-liner (start off by typing PowerShell first, to get the PowerShell prompt):

This way, the File Server Services Role (FS-Fileserver) will automatically be installed and the Windows Firewall will be configured to allow SMB traffic. Optionally, you can install one of the other Server Role Services. The table below shows the Role Service names you can use in combination with the Install-WindowsFeature PowerShell cmdlet:

The following three scenarios show you the possibilities of the File Server Role on Server Core installations of Windows Server 2012:

One of the easiest things to do is create a basic file server. In fact, you have already done that by installing the File and iSCSI File Services Role Service above.

Now, to create some file shares for users, you could fire up Computer Management (compmgmt.msc) or the shared folders MMC Snap-in (fsmgmt.msc) from a Windows 8 or a Server with a GUI Windows Server 2012 installation. Alternatively, you can create folders and shares from the command line.

For instance, to create a folder on the E:\ NTFS-formatted volume, give the built-in group Authenticated users “modify NTFS” rights, and share it as Groupdata with modify permissions on the share, use the following commands: 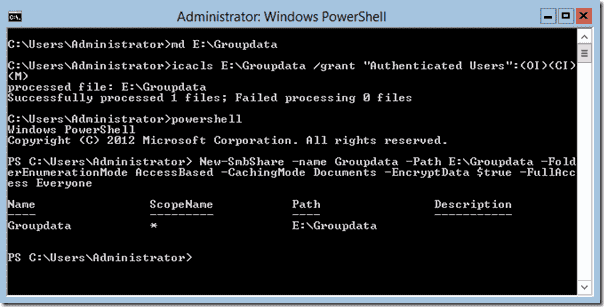 Oops. By using the New-SMBShare cmdlet, I already created a share with a couple of advanced features like Access-Based Enumeration (ABE), the caching mode, and encryption requirements for the SMB traffic. See how easy that is! 🙂

One of the neat new features of Windows Server 2012 is Dynamic Access Control. DAC allows you to grant access to files and folders, based on attributes of a user’s account in Active Directory or the account of the computer that user is working on.

Now, you can plan and create your Central Access Policies and automatic file classification, and roll out all this new stuff to your Server Core-based File Server through Group Policies. More information can be found here.

Another cool feature that’s new in Windows Server 2012 File Services is data deduplication. This feature allows you to cut up files into storage chunks, store identical chunks of data in the Storage Information folder of an NTFS-formatted volume, and then link to these identical chunks from multiple files, which drastically reduces the storage used over time.

To use this feature, first we’ll need to install the role service. The following PowerShell command will do exactly that:

To get things rolling, we’ll run the following PowerShell command to start deduplication: 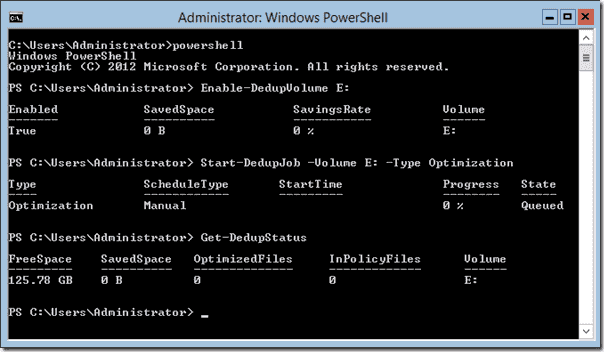