How to install Data Deduplication in Windows Server 2012 R2

Server 2012 takes that idea one step further to be able to recognize duplication down to the level of chunks of files (32–128 KB). Further with Windows Server 2012 R2 they have improved the performance of deduplicated volumes to allow them to be a repository for Hyper-V VHDs.

So where does this really help? The use case for this technology is obviously fileservers, specifically those that have large files that aren’t modified very often. In my case, my two biggest usages are for Veeam backup files of my virtual machines and the images within the document retention system. According to Microsoft you can expect to see space savings up to 95% on virtual hard drives, 80 on ISOs and other deployment software and 50% on basic user documents. If you have a mix of all of the above the process can save you between 50-60% of the actual data size.

Getting started with Windows Server 2012 R2 disk deduplication is not hard but it does require a few steps. To make this easy here’s a quick run down.

After you set Data Deduplication up you can easily monitor how it’s doing, although I would probably give it at least a day to process on a mature file server before expecting to see real results. Graphically you can look at the properties either of the volume or any folder contained with it to see how it’s doing by comparing Size versus Size on disk. Know that that will reflect not only deduplication but also any compression you may have turned on as well. As you can see from the screenshot, the results can be rather staggering. 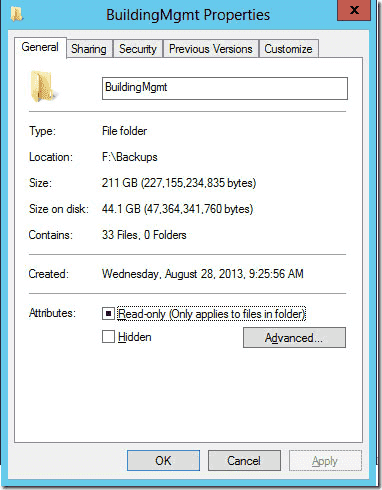 Further you run Get-DedupeStatus as Administrator from the PowerShell prompt to see the output of just what Data Deduplication is doing for you.

So you want to do this in a few places at once? The good news is all the configuration above can be done via PowerShell if you would like to script it. The commands below will enable the role, configure Data Deduplication on a mythical volume F:, and configure the Minimum File Age to 5 days. There are other settings possible but these should get you going for most uses.

For more information regarding when and where to use Data Deduplication Technet has a pretty good read on the subject.