How to install a DHCP Server on Server Core

Home Blog How to install a DHCP Server on Server Core

Sander Berkouwer  Tue, May 7 2013Fri, May 31 2013  server core  4
To make life easier as an admin, several network protocols have been introduced to help manage TCP/IP. One of these protocols is the Dynamic Host Configuration Protocol (DHCP).
Contents

DHCP Servers hand out IP addressing information to DHCP clients to make it easy for people using these devices to connect to the network without making changes to their networking configuration. In dynamically scaling environments, DHCP clients are increasingly becoming DHCP clients with the DHCP Server maintaining DHCP reservations; this practice ensures that certain DHCP clients get the same IP address every time, based on their MAC address.

History of the DHCP Server Role in Server Core

To install the DHCP Server Role on a Server Core installation with dism.exe, use the following command:

To install the DHCP Server Role on a Server Core installation with Install-WindowsFeature, first start PowerShell on the command line (by typing it) and then use the following command: 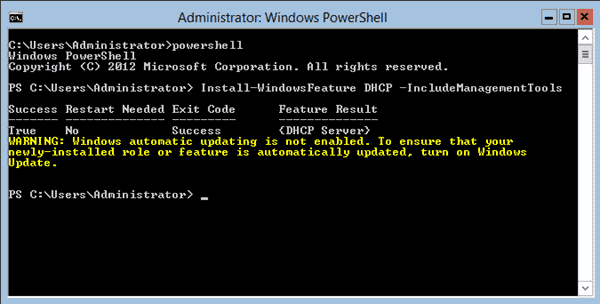 Install a DHCP Server with PowerShell

To hand out IP information to clients requesting them, you will need to create one or more DHCP scopes. To benefit most from your DHCP Servers, you will want to specify not only IP ranges to hand out but also DHCP options, like the default gateway address and addresses for DNS Servers. These DHCP options can be configured at the DHCP scope level and at the server level.

If you’d rather define these options as Server options, replace the Set command with the following:

Now, your DHCP Server may not be handing out IP information just yet. One reason for this is that your Server Core Domain Controller saw another DHCP Server on the network when it tried to activate its DHCP scope. Another situation might be that your Server Core Domain Controller is a member of an Active Directory domain and is not yet authorized in Active Directory to hand out IP addresses.

To authorize your Server Core DHCP Server in Active Directory, use the following command:

Let’s get back to the failover DHCP scopes I mentioned earlier. Once again, this feature can be deployed through PowerShell as well as in the DHCP Server MMC Snap-in. I recommend using PowerShell in this case, however, since it’s harder to click the wrong buttons on the command line.

To use DHCP scope failover, you should have two Windows Server 2012 installations with the DHCP Server Role installed on them. It is recommended to make these two DHCP Servers members of the same Active Directory Forest to accommodate authentication and time synchronization. In this case, both DHCP Servers need to be authorized in Active Directory, and you should log on with domain admin credentials for these steps.

To explain how DHCP failover works, we will look at it in an example environment. Building upon the earlier example, two DHCP Servers named SC2 and SC3, with IP addresses 192.168.0.2 and 192.168.0.3, will host the (admittedly tiny) DHCP 192.168.0.10 to 192.168.0.250 scope. The two DHCP Servers will be configured in Load Balance mode, essentially creating an Active-Active configuration wherein both DHCP Servers serve client requests with 50%/50% load distribution percentages.

Of course, SC2 is already configured with the DHCP scope. To configure DHCP failover for this scope, use the following commands on SC2:

To see statistics on the replication of the DHCP scope, use the following command: