Home Blog How to download Vista SP1 via BitTorrent

It seems as if Microsoft is impressed by the enormous critique they got for the delay regarding the release of Vista SP1. There are reports that the English version of SP1 will be available for Volume Licensing customers at the end of week. Later this month MSDN and Technet Plus subscribers will be allowed installing this precious service pack. If you don't want to wait you can download it right now via BitTorrent. You should just be careful not to download an altered version containing malware. I will explain in this post how.

First, you have to install a BitTorrent client if you don't have one yet. There are many, the one I usually use is ABC. Next you go to one of the BitTorrent tracker sites such as Pirate Bay and search for "Vista SP1 RTM". The file size should be 434,46MB. You will get several hits; take the one which has the most seeders (SE) and leechers (LE).

To make sure that you haven't downloaded an altered version, you should check the MD5 hash of the exe file. Several bloggers have created the hash code from the original disc. You can use the MD5 Checksum Verifier for this purpose. For the 32 bit version of Vista SP1 the hash code should be d597866e93bc8f80ecca234c4e9ce5a2. The hash for the 64-bit version is supposed to be 983308426e8ee7649f53b41f4e5c42d4. 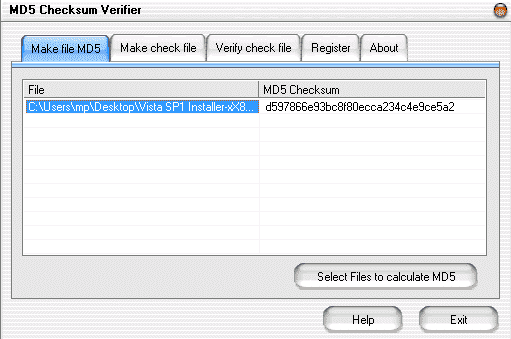 Technically, this method makes absolutely sure that you have downloaded a file that is identical to the one the hash code was created from. The other consideration is if you could trust those sites who published the hash. You can google for the code to see how many already had posted it. Since I don't have the original version yet, I can't guarantee that the hash code is correct. So I highly recommend installing it only in a test environment with no network connection.

WinBeta reported that there is another way to download Vista SP1 from Microsoft's OEM site. I started to download it, but after some minutes it stopped. I guess Microsoft closed this hole by now.