Kyle Beckman  Fri, Sep 4 2015Tue, Sep 8 2015  deployment, windows 10  7
The Windows Imaging and Configuration Designer (WICD), part of the Windows 10 ADK, allows IT admins to automate configuration that previously required manual configuration or clean OS loads. In this article, I’ll cover how to install WICD, create a provisioning package, export the package, and install it on a client system.

With the release of Windows 10, Microsoft has made a new tool, the Windows Imaging and Configuration Designer (WICD), available as part of the Windows 10 Assessment and Deployment Kit (ADK). WICD (which a number of us have noticed looks a lot like it should be pronounced “wicked”) can build provisioning packages that can be used to automate manual configuration of devices. This can really come in handy in Bring Your Own Device (BYOD) and new PC scenarios.

WICD is available as part of the Windows 10 ADK. The ADK setup file, adksetup.exe, is a stub file that you use to download only the parts of the ADK that you need. If you uncheck every option and then select Imaging and Configuration Designer (ICD), the ADK setup will add Deployment Tools, Windows Preinstallation Environment (Windows PE), and User State Migration Tool (USMT). After you click Install, the components will download and install on your computer. 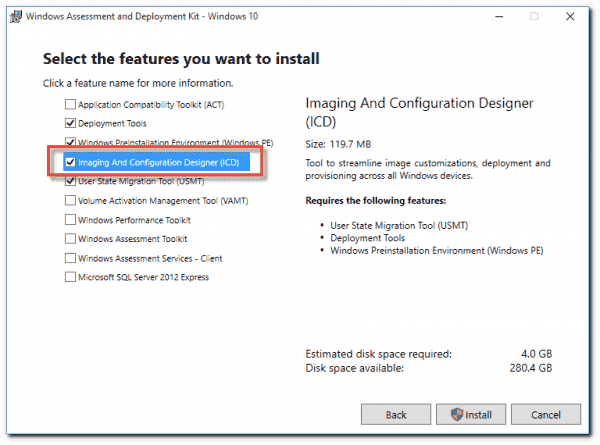 Running WICD for the first time ^ 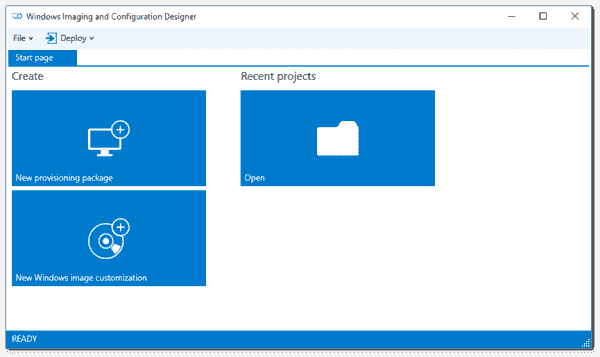 Running Windows Imaging and Configuration Designer for the first time

Next, you’ll need to select a project name (I used “Demo Project”) and a save location. Ensure that you give each project a unique folder to save files. This will become important later when you export the provisioning packages. If errors occur during the export process, the logs will be stored in this folder. 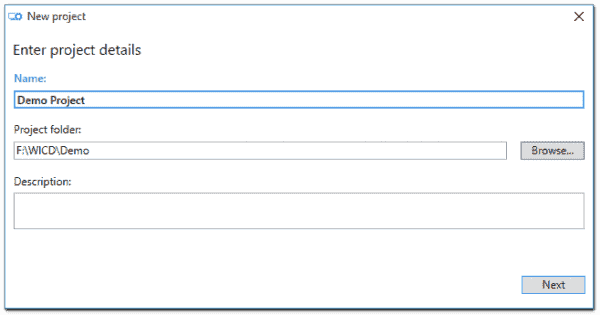 Determine which editions you’ll be configuring with this provisioning package. WICD can configure Windows desktop editions (such as Home, Professional, Enterprise, and Education), Windows mobile editions (typically phones), and Windows 10 IoT Core. In most scenarios, I’m guessing most people will be using the Common to all Windows desktop editions option unless you’ve made an investment in Windows mobile devices. 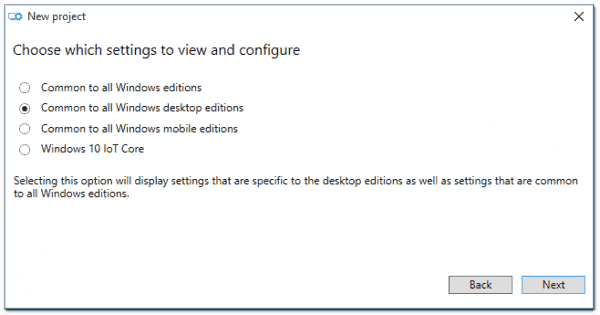 Selecting the Windows edition in Windows Imaging and Configuration Designer

We won’t be importing any settings from an existing package. So, we’ll skip the last screen by clicking Finish.

The number of available settings is, quite frankly, staggering. The UI will occasionally offer tips and/or an embedded web page in the lower middle area. Save yourself some time and go check out the Windows Provisioning settings reference instead of thumbing through all the settings by hand. The UI also has a search box and the ability to change the view to All settings (the default), Common OEM settings, or Common IT Pro settings. I will warn you that some useful settings get hidden if you change the view from All settings to Common IT Pro settings, so be aware of that if you’re looking for a setting that you can’t find. 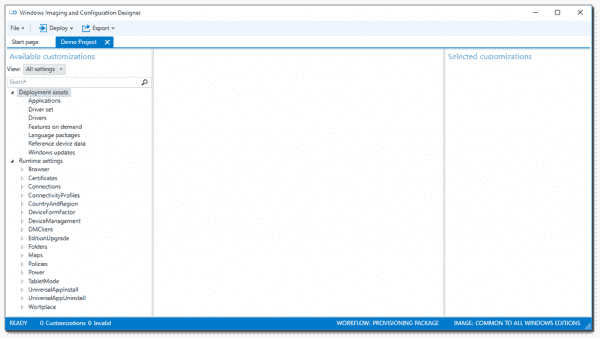 Packages created in WICD can be encrypted with a password and/or signed with a certificate. Without the password, the package can’t be used on a system. If you don’t digitally sign the .ppkg file, users attempting to use the provisioning package will receive an error that the package isn’t signed. 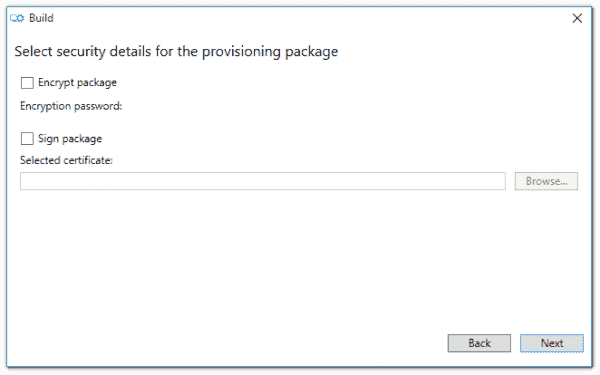 Choose the location where you’ll save the .ppkg file and then click Build on the last screen.

Three ways exist to install a .ppkg file that was generated in WICD. If you have a file that was distributed via a website or sent via email, you’ll have to browse to the file and double-click it. If you have the file on removable media, you can install the package by going to Start, Settings, Accounts, Work access, Add or remove a package for work or school.
Adding or removing a package for work or school in Accounts Settings

If you’re working with a new computer, you can press the Windows key five times during the Out of Box Experience (OOBE). Ensure that a USB drive is attached to the computer with the .ppkg file and then click Set up to select your provisioning package.
Prompt for WICD provisioning package in Windows 10 OOBE

Regardless of which way you get to the install, you’ll have to accept a UAC prompt. The WICD .ppkg packages typically have to edit settings that only an Administrator can modify. The assumption with the .ppkg package is that either the owner of the system (in a BYOD scenario) or someone from IT is installing the package and would have the required Admin rights on the system. 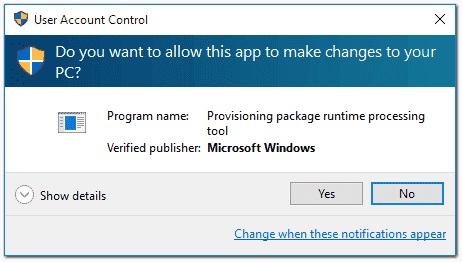 Next, you’ll be presented with a warning about the changes that will be made on the system. Click the Yes, add it button and Windows will make the required changes. If the changes require a reboot, the system will reboot at this point in the process.
WICD package install warning

Removing the package is as simple as clicking the Remove button and accepting the UAC prompt. Some packages may require a reboot. Also, not all settings from a provisioning package can be removed, so some changes to a system may be permanent.
Viewing provisioning packages on your computer

In the next installment of our series on Windows Imaging and Configuration Designer, we’ll cover how to configure BYOD devices with WICD provisioning packages.