How to create an open file/folder dialog box with PowerShell

Adam Bertram  Mon, Jun 11 2018Mon, Jun 11 2018  powershell, powershell beginner  14
The open file/folder dialog box is a great way to receive input for your scripts interactively. It provides a file browser that makes for a much more user-friendly approach than merely prompting for a path. In this post I show you how can use OpenFileDialog in your PowerShell scripts.

When you're using a Windows application and need to provide input for a file or folder, you've probably seen the standard open file dialog. 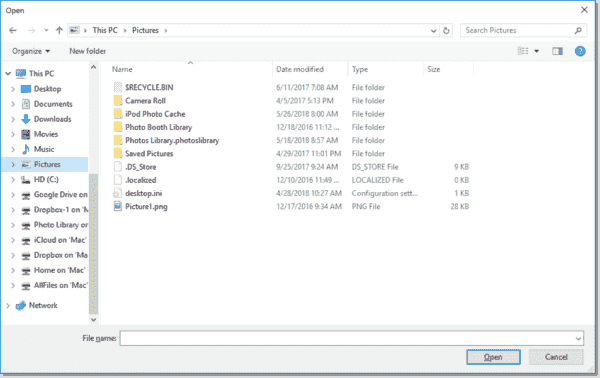 This dialog box is standard across lots of Windows applications. The software you're using to invoke this dialog box uses a .NET assembly called System.Windows.Forms with a class inside called OpenFileDialog. Did you know you can get input to your PowerShell scripts this way too? Since PowerShell lies directly on top of .NET, we can invoke any .NET class we need, which means we can also bring up the open file dialog box.

To do this, we'll first need to load the System.Windows.Forms assembly manually using the Add-Type cmdlet. Lots of .NET assemblies are typically loaded for you, but in this case, we have to do it manually.

Once we've loaded the assembly, we can instantiate an OpenFileDialog object using New-Object.

At this point, the dialog box will not display. We're just instantiating the object. To show the dialog box, we'll have to use the ShowDialog() method.

This will display the dialog box. I'm assigning the output of ShowDialog() to $null. This is because the output does not return anything useful for our purposes. You might expect the output to return the chosen file name, but it doesn't. The system then stores the file information in the OpenFileDialog object itself.

You can see above that the OpenFileDialog object now contains all the information gathered from the file chosen.

The above example allows me to choose any file we'd like, but we also can limit the input by file type too using the Filter property.

Now when the dialog box displays, you can see below that the only options are to choose between Word and Excel documents.

For more information about this method of receiving file location input from users, refer to the Microsoft MSDN information.