How to configure computer delegation with PowerShell

Home Blog How to configure computer delegation with PowerShell

Luc Fullenwarth
Luc is working as a system administrator since 1999 at Alcatel-Lucent, at HP, and currently for an European institution. He focuses on Active Directory, Group Policy, security and PowerShell.

The concept of computer delegation in a nutshell ^

To make it easy to understand the whole article, let's work on an example:

This scenario is called a "double hop," and without delegation, you will get an "Access denied" error message.

The "one from many" approach consists of setting the ComputerC account with the list of all ComputerB-like computers allowed to access all services on ComputerC through a double hop.

A full comparison of all of these different possibilities is beyond the scope of this article.
However, you should know that:

Based on my findings, when you set delegation, it needs a few seconds or even minutes before you can check the value with a Get verb and also before all involved computers become aware of the delegation.

This can lead you to wrong conclusions when you play around and you want to check the results too fast.

Unconstrained delegation to any service ^ 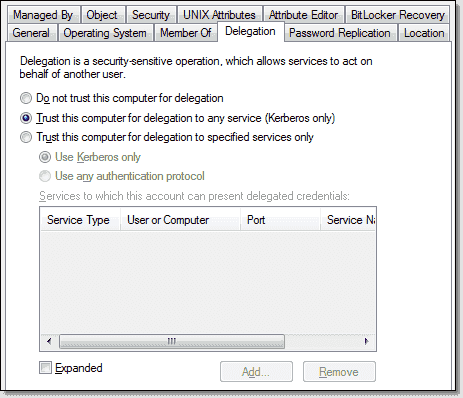 Unconstrained delegation with the user interface

This is attainable with the Set-ADAccountControl cmdlet.

Constrained delegation to specified services with Kerberos only ^ 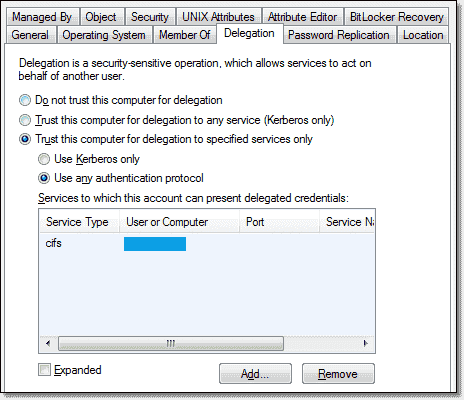 Constrained delegation using Kerberos only with the user interface

In this case, you must specify a list of ComputerC's service principal names (SPNs) in ComputerB's account. To obtain the list of SPNs, you can use the Get-ADComputer cmdlet and display the servicePrincipalName property of ComputerC.

Then you add ComputerC's list of SPNs you need to ComputerB's account with the Set-ADComputer cmdlet along with the Add parameter. This parameter accepts a hash table containing an array of strings as input.

Constrained delegation to specified services only with any authentication protocol ^ 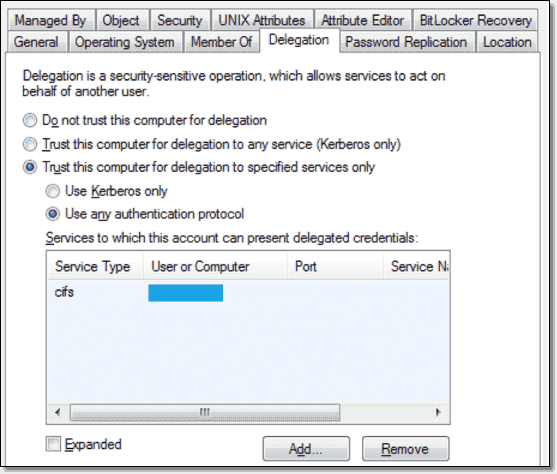 Constrained delegation with any protocol with the user interface

As with the former method, you must find the list of ComputerC's SPNs and add those you need to the ComputerB account.

However, you must also use the Set-ADAccountControl cmdlet with the TrustedToAuthForDelegation parameter.

There's no screenshot here because there is no native user interface to set this value. You must do it with PowerShell.

In the following example we will allow ComputerB1 and ComputerB2 to access ComputerC with the Set-ADComputer cmdlet. The input for the PrincipalsAllowedToDelegateToAccount parameter is an array of distinguished names. But for convenience we will use a computer object as input, and the cmdlet will find out the distinguished name itself.

Please note that the PrincipalsAllowedToDelegateToAccount parameter is only available on Windows 8 or Windows Server 2012 computers and later.

Check the current delegation for a computer ^

The computer account object stores all values, which the Get-ADComputer cmdlet can retrieve.

Check delegation for a computer

When using resource-based constrained delegation, it will display System.DirectoryServices.ActiveDirectorySecurity for the msDS-AllowedToActOnBehalfOfOtherIdentity property.

Check details of resource based delegation for a computer

To remove unconstrained delegation from ComputerB, use the following command:

To remove constrained delegation from ComputerB, use the following two commands:

To remove resource-based constraint delegation from ComputerC, use the following command: