How to administer Active Directory from your iPhone or iPad

Timothy Warner  Fri, Mar 30 2012Sat, Mar 31 2012  mac  4
In this article you will become aware of some options regarding how you can access your Windows servers by using an iPhone, iPod touch, or iPad device.

Let’s face facts: the Apple iPhone, iPod touch, and iPad were not designed for enterprise networks. The devices certainly were not intended to be integrated in Active Directory networks.

Nevertheless, Apple hardware is growing increasingly ubiquitous these days. The bottom line is that many Active Directory administrators carry iPhones instead of Android- or Windows Phone-based mobile phones.

Thus, we encounter the question: what iOS apps exist that can facilitate our management of Active Directory from our iPhones or iPads?

Before we list those apps, we need to understand some relevant Apple terminology. In Apple development nomenclature, an iOS device is a piece of Apple hardware that runs the iOS operating system. Examples of iOS-based devices include the iPhone, the iPod touch, and the iPad.

Furthermore, iOS applications can take one of three distinct forms:

Newcomers to iOS development ask the reasonable question, “How in the world can a Universal app dynamically change its appearance depending upon whether the host hardware is an iPhone or an iPad?” If you are interested, the answer can be found in the article “Creating a Universal App” at the Apple iOS Developer Library.

In this article we will approach our app overview by examining these tools from three different perspectives:

NOTE: All of the following iOS apps presume that your Apple device is connected to the same Wi-Fi network as the servers in your Active Directory environment.

Perhaps the most straightforward method for administering a Windows Server 2008 domain controller is to connect directly to the box by using a remote access protocol such as Virtual Network Computing (VNC), Remote Desktop Protocol (RDP), or Secure Shell (SSH). 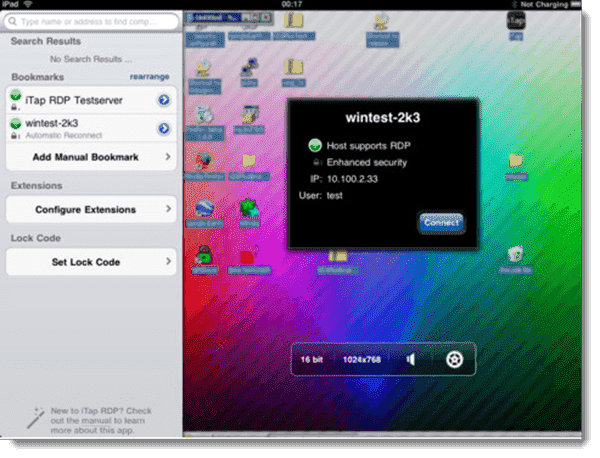 Your Active Directory forest may be virtualized either partially or fully. The good news is that the major virtualization vendors have published iOS apps that facilitate remote connection to those devices and infrastructures.

Now we turn our attention to iOS apps that were designed expressly for performing one or more specific Active Directory and/or server management tasks. 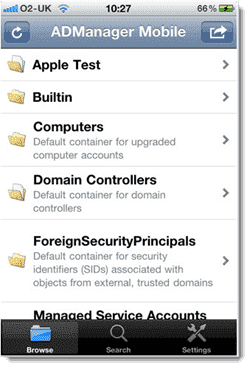 Today we presented a summary of the most popular iOS apps for managing Active Directory from your Apple device. Have you used any of these tools to good effect in your environment? Have we missed an essential app? Please let us know in the comments portion of this post.