How an MVP became a Mac

Home Blog How an MVP became a Mac

Michael Pietroforte  Mon, Oct 5 2015Mon, Oct 5 2015  fun, microsoft  32
This is going to get embarrassing. Today, I received notice about my 8th Microsoft Most Valuable Professional (MVP) award, and I read the message on my brand new MacBook Pro. Are you wondering how this could possibly be your concern? I think if someone like me is now forced to work on a Mac, some profound changes are going on in the computer industry that might soon also affect your workplace.

The fact that an MVP owns a Mac is not the embarrassing part. If you are a long-term follower of this blog, you know that I am an outspoken Apple opponent. I have also been accused numerous times of being a Microsoft fan boy, and I can’t really argue about that.

I also haven’t been brainwashed overnight. My views are still the same. (Well, almost. More about that later.) I still don’t like Apple as a company. I don’t like lifestyle brands. And I don’t like the arrogance of many of the company’s top executives (including Tim Cook). 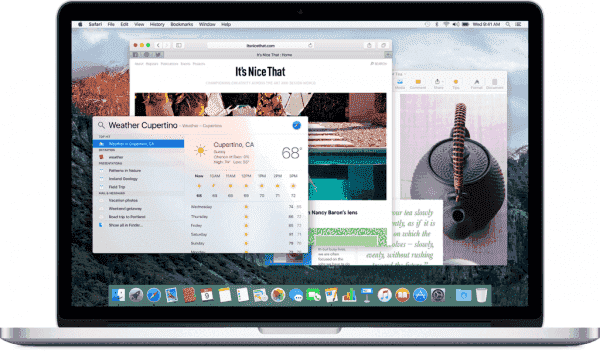 So how is it possible, then, that I am typing this blog post on a Mac? I swear I am innocent! The culprits are a spider, the PC industry, and Satya Nadella.

The story about the spider is quickly told. One Sunday morning, I noticed a spider the size of my hand (and I have unusually longer fingers) on the wall. I was used to sharing my place with such long-legged visitors because my apartment was located opposite a little jungle in the Philippines. However, when the spider suddenly dropped right in front of my food, I instinctively took a step backward where a mug of freshly brewed coffee was waiting for the arrival my hand. A second later, my Samsung laptop enjoyed my Starbucks Kenia blend. Unfortunately, the strong coffee didn’t go down well through the Ultrabook’s keyboard. I noticed with horror that I now needed a new laptop.

The spider unlikely will have further influence on the development of the computer industry because it is now in spider heaven. The PC industry is still alive, but it—in contrast to my spider—is dying a slow and agonizing death. The reason I was horrified is that I knew that I would have serious problems finding a new laptop that would be a match for my three-year-old Samsung computer. I hate to step backward in time, and buying a new laptop that is four or five years behind what is now technologically possible was out of the question.

I already outlined why I believe that the PC industry is in trouble. PC makers have been paralyzed by the post-PC blah blah in computer magazines and stopped to invest and to innovate. The only computer vendor that has the engineers who can currently compete with Apple’s is Samsung. And the Korean hardware builder has essentially abandoned the PC market. (Which is a big mistake because I am now also considering replacing my Note 3 and my Gear 2 with the Apple counterparts. I believe computer makers have to offer all possible form factors.)

The latest data shows that Windows 10 won’t be the rescuer. Its adoption rate has slowed considerably. The apparent success in the first weeks after its release was mostly caused by the fact that the upgrade is free for the first year and that Microsoft essentially pushed the upgrade on every PC, whether users requested it or not.

It was naive to believe that Windows 10 could help the PC industry because nowadays people don’t buy operating systems, no matter how good or bad they are. Computer buyers only want sexy devices. The only hope left now is that PC vendors can successfully copy Microsoft’s Surface Pro, the only device that shows that innovation in the PC market is still possible.

However, it becomes more and more obvious that Microsoft no longer counts on the PC market anyway. It appears that the Redmond software giant is returning to its roots. In the beginning, Microsoft didn’t have its own platform and it built software for any operating system that had enough market share.

The story of Bill Gates trying to convince Steve Jobs to license Mac OS to other hardware makers is legendary. Windows only exists because the Apple founder wasn’t interested in becoming the richest man on the planet. All he wanted was “to leave a dent in the universe.”

This is the main reason why Satya Nadella made peace with two of the main OS builders, Apple and Google. And that brings me to my third reason. I am also making peace. The camp fights of the Ballmer (and the late Gates) era are over. Windows will continue to exist for quite a while, but it will never again be the dominating operating system.

As an IT pro, you have to adapt to these changes. Being an expert in one operating system isn’t enough anymore. Just like Microsoft shifts focus from Windows to other platforms, you need at least a fundamental understanding of Android, Linux, iOS, and OS X—and, of course, the cloud.

You say that you don’t care because in your organization it is still all about Windows? You probably heard the news that IBM, the PC inventor, has now become a Mac. IBM is still one of the biggest IT companies in town. If such a large organization can replace the majority of its computers with Macs, then any organization can.

The first weeks with my Mac confirm this. When Windows still dominated the computer market, switching to Mac OS was difficult because most software vendors only built applications for the PC. These times are definitely over. I need quite a few applications for my work, certainly more than the average user. I must admit, I was quite surprised that I could find all I need for the Mac.

Actually, the main reason I now can’t imagine switching back to Windows on my work device is because of software, not hardware. OS X has become a really nice operating system. One of the things I really like is that it has a Start screen (Launchpad) instead of a Start menu. This comes in handy if you work with as many applications as I do. My productivity certainly jumped after the switch, mostly because the programs I am working with now are better than the ones that I used under Windows.

It appears to me that software makers in the Mac world have a different attitude than those in the Windows world. Apple’s hardware always has to be high-end, and software vendors adapted to this stance. Of course, this comes with a cost. Many of the programs I worked with on my PC were free or comparably cheap. In the Apple world, you rarely get good applications without paying for it. However, I don’t regret any of my purchases. The money spent was well invested because time is money, and my increased productivity already paid off the purchases.

But even if your organization requires a few applications that are only available for Windows, it is no longer a reason why PCs can’t be replaced with Macs. Two technologies exist that make things fundamentally different now than they were in the past:  virtualization and SSDs.

Virtualization software (Parallels Desktop and VMware Fusion) for the Mac focuses on users who switched from the PC. Windows applications appear to be fully integrated. An average user wouldn’t even notice that Windows is running in the background.

Thanks to the speed of SSDs, you also rarely notice a delay when a Windows application starts. For instance, Outlook for Windows on a Mac with SSD starts faster than on a modern PC (if there is such a thing) with an HDD. This is perhaps not a good example because Microsoft Office 2016 for the Mac can replace the Windows counterpart in the vast majority of work environments.

Of course, I don’t have to tell you that the hardware of the MacBook Pro is excellent. It is also true that it is hopelessly overpriced, which explains Apple’s obscene profit margins. This business model works because no PC maker is currently able or willing to build high-end computers. Trust me, there is none. I searched for quite a while and what the entire PC industry currently has to offer is embarrassing. The MacBook slogan “Light. Years ahead.” is perhaps the first true claim that Apple’s marketing ever made.

So now you know how an MVP, a Microsoft fan boy, and an Apple hater became a Mac.