Vladan Seget  Wed, Mar 1 2017Wed, Mar 1 2017  virtualization, vmware  8
vSphere 6.5 introduced vCenter Server Appliance High Availability (VCSA-HA), which is a new way to protect vCenter. However, this feature is only available when installing vCenter as a vCenter Server Appliance (VCSA). In other words, it is unavailable when you install vCenter server on a Windows server.

VCSA 6.5 runs the new Photon OS owned by VMware and has a larger set of features than the Windows equivalent. Previously, VMware used CentOS and SuSE Linux Enterprise Server (SLES), but now VMware owns the underlying OS. Please read my guide of how to install VMware vCenter (VCSA) 6.5.

The VCSA-HA feature works as a cluster of three VMs. It is an automated clustered solution allowing you to maintain the infrastructure services in case there is a hardware problem or the main, Active node is isolated within the cluster.

Please view the diagram below for the relationships between the nodes.

In case of a hardware or software failure related to the Active node, the Passive node takes over automatically, and becomes the Active node. Tests show that the failover RTO (recovery time objective) is usually less than five minutes. Because the database uses synchronous replication, there is no data loss; that is, the recovery point objective (RPO) equals zero.

In case a VCSA 6.5 machine is isolated from the cluster, the system stops all of its services so the Passive node can take over. The mechanism takes into account intermittent network problems and puts itself into an isolated state only after several retry attempts have failed.

The Witness node cannot become an Active or Passive node and stores only chunks of data related to the tiebreaker code.

There's a bit of configuration necessary at the network level. With the help of the vSphere web client, you have to create a new network that will then serve as the communication channel of the VCSA-HA cluster.

Each VCSA node will then have two network interface cards (NICs):

The vCenter Server deployment can use an internal or external Platform Services Controller (PSC), where the PSC assures a certain number of authentication services such as the vCenter Single Sign-On (SSO), the VMware Certificate Authority (VMCA), the Certificate Store (VECS), licensing, the Lookup Service for component registrations, and other services.

Independently of the deployment option and the inventory hierarchy you select, you have to set up your network before you can start with the configuration.

Simply add a port group to each ESXi host and assign a VLAN. 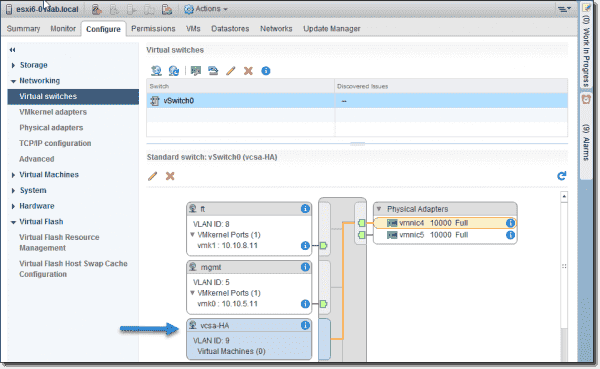 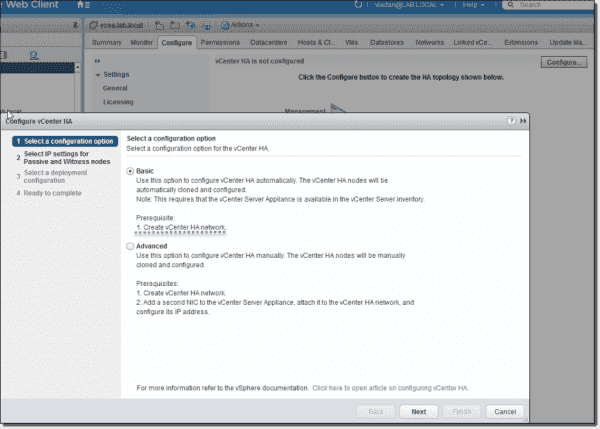 Next, you have to assign IP addresses for the Passive and Witness nodes. 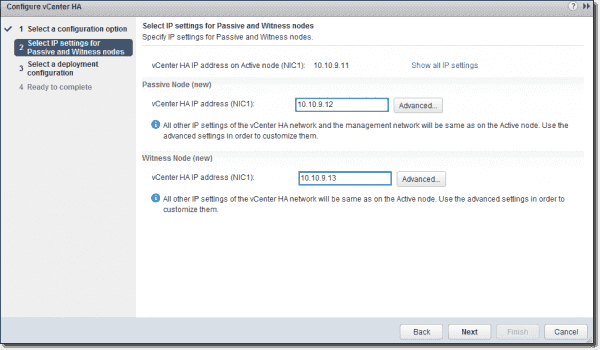 All vCenter nodes are up

It has never been simpler to install an active-passive cluster protecting a vCenter server as a crucial piece of VMware infrastructure. Service providers have been waiting for this for a long time. The automated clustered protection works flawlessly by monitoring the Active node resources.

This configuration does not really suit smaller environments, as it uses additional resources for maintaining the cluster (the Passive node consumes the exact same amount of memory and CPU cycles).

The Witness VM is a lightweight VM maintaining just the witness components. Additionally, the VCSA‑HA 6.5 virtual machine comes with 12 virtual disks. Each virtual disk is a separate virtual machine disk (VMDK) file. The server uses each of these 12 virtual disks for different purposes, including storing logs, core dumps, netdumps, auto deployment, Update Manager, and so on. The passive VCSA has the exact same configuration.