Wolfgang Sommergut  Thu, Jul 8 2021Tue, Nov 9 2021  windows, windows 11  5
The UI facelift and some other innovations in Windows 11 have received the most attention so far. But some other changes might be more interesting for professional users. Microsoft is raising the hardware requirements for the new operating system, which many office PCs will not meet. In addition, there will be new rules for updates and support.

Most of the negative reactions to the Windows 11 announcement complained about the considerably higher hardware requirements. Microsoft apparently wants to use the upgrade to the new operating system to phase out older devices. 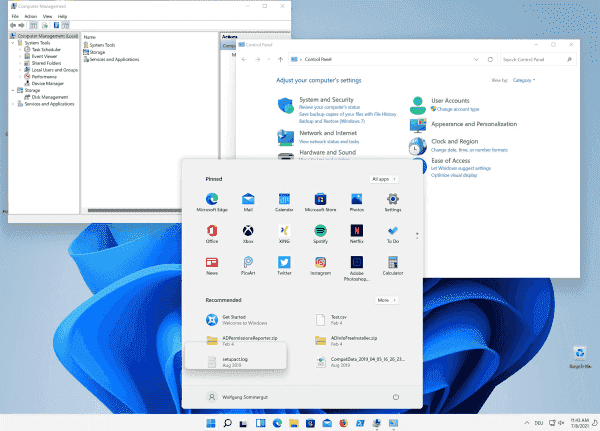 These are likely to fail primarily due to two hurdles: the system requirements for CPUs and the need for Trusted Platform Module (TPM) 2.0.

TPM for many security features ^

Microsoft justifies TPM 2.0 as a requirement for Windows 11 because it enables security features that help protect PCs against increasingly sophisticated attacks.

Until now, users need TPMs primarily for BitLocker; therefore, this component is already available in most new business notebooks. Features that Microsoft categorizes under the term Virtualization Based Security, such as Device Guard or Credential Guard, can also use these chips.

If Microsoft can assume that every computer contains TPM, other applications for it are likely to emerge, primarily for authentication. Virtual smart cards, for example, already use this module.

Microsoft created confusion with its back-and-forth over the required TPM version. Originally, the announcement distinguished between a "soft floor" and a "hard floor." The latter stipulated TPM 1.2 as the absolute minimum requirement, while the soft floor recommended TPM 2.0. This is now off the table—the minimum requirement is TPM 2.0.

Requirements for the CPU ^

While the necessity for a TPM chip might be understandable because it allows Microsoft to develop a more secure operating system, opinions have heated up over the increased requirements for the processor.

Since little has changed under the hood, Windows 11 should hardly require more computing power than its predecessor. It shares the same foundations as Windows 10, which is why the deployment and tools for this purpose remain the same. Nevertheless, the OS requires an eighth-generation processor from Intel. This page offers an overview of all supported CPUs. 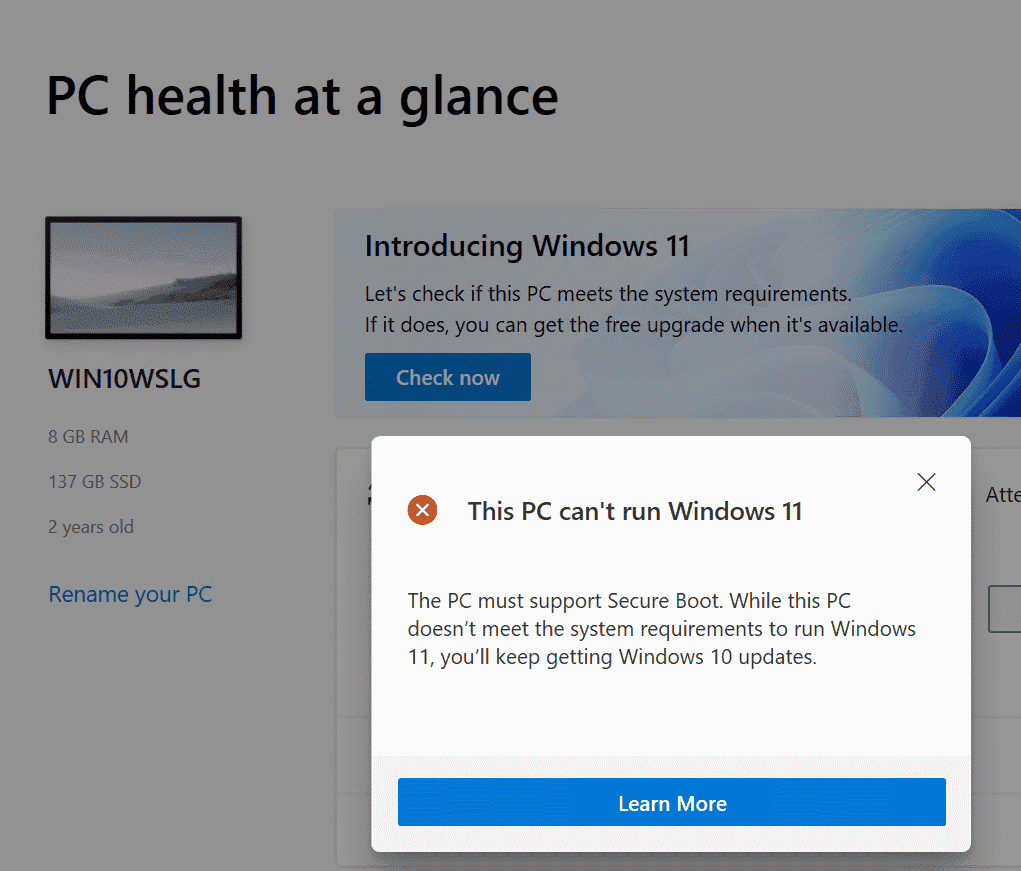 As a result, many existing office computers are not likely to meet the Windows 11 requirements. However, a number of Microsoft's high-priced Surface models, which are only a few years old, are also affected. The manufacturer responded to this issue only with hollow marketing phrases.

With the removal of 32-bit processors from the compatibility list comes the end of the Windows 32-bit version.

With Windows 10 2004, Microsoft started to deliver only the 64-bit version to OEMs, but end users still received the latest feature upgrades for the 32-bit OS. This option now ends with Windows 11.

Checking hardware for compatibility with Windows 11 ^

With the updated PC Health Check app, users can determine whether their computer is suitable for Windows 11. However, this only runs under Windows 10 and only provides a result for the Home and Pro editions. In the Enterprise Edition, a message appears indicating that the PC is managed by the company. 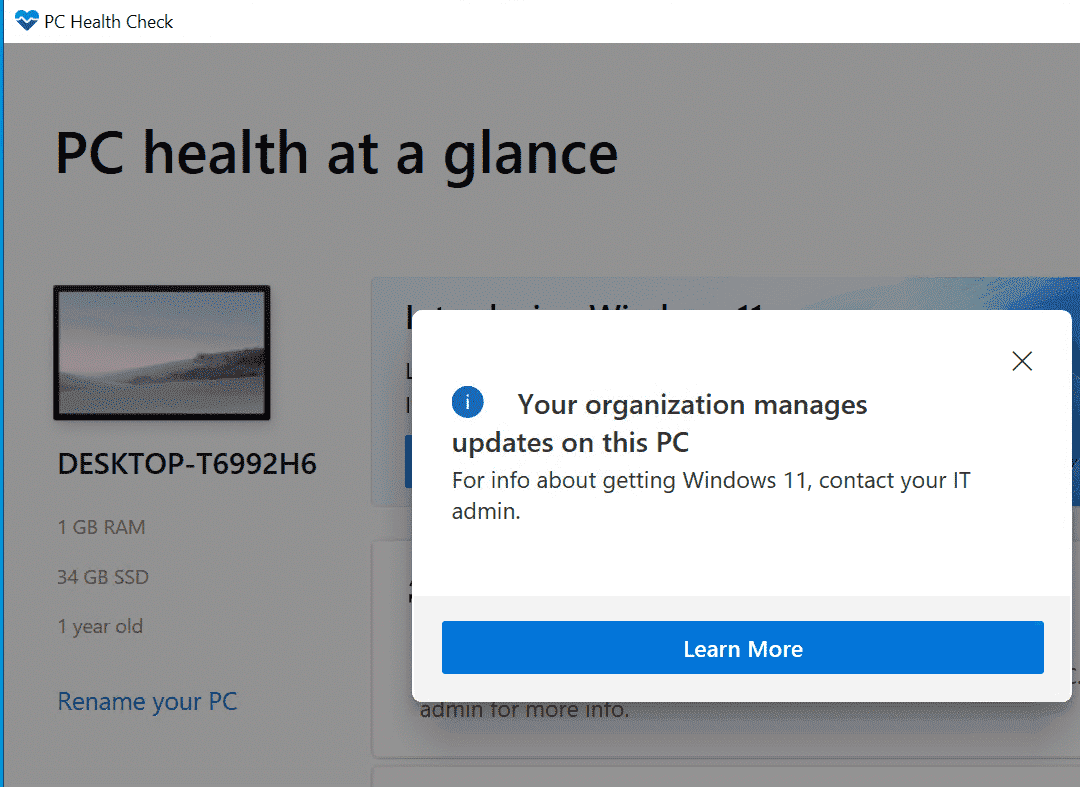 Alternatively, you can use the open-source tool Win11SysCheck, as it does not have these limitations. However, SmartScreen gives you a warning before running the program, so you have to confirm its execution with elevated rights. 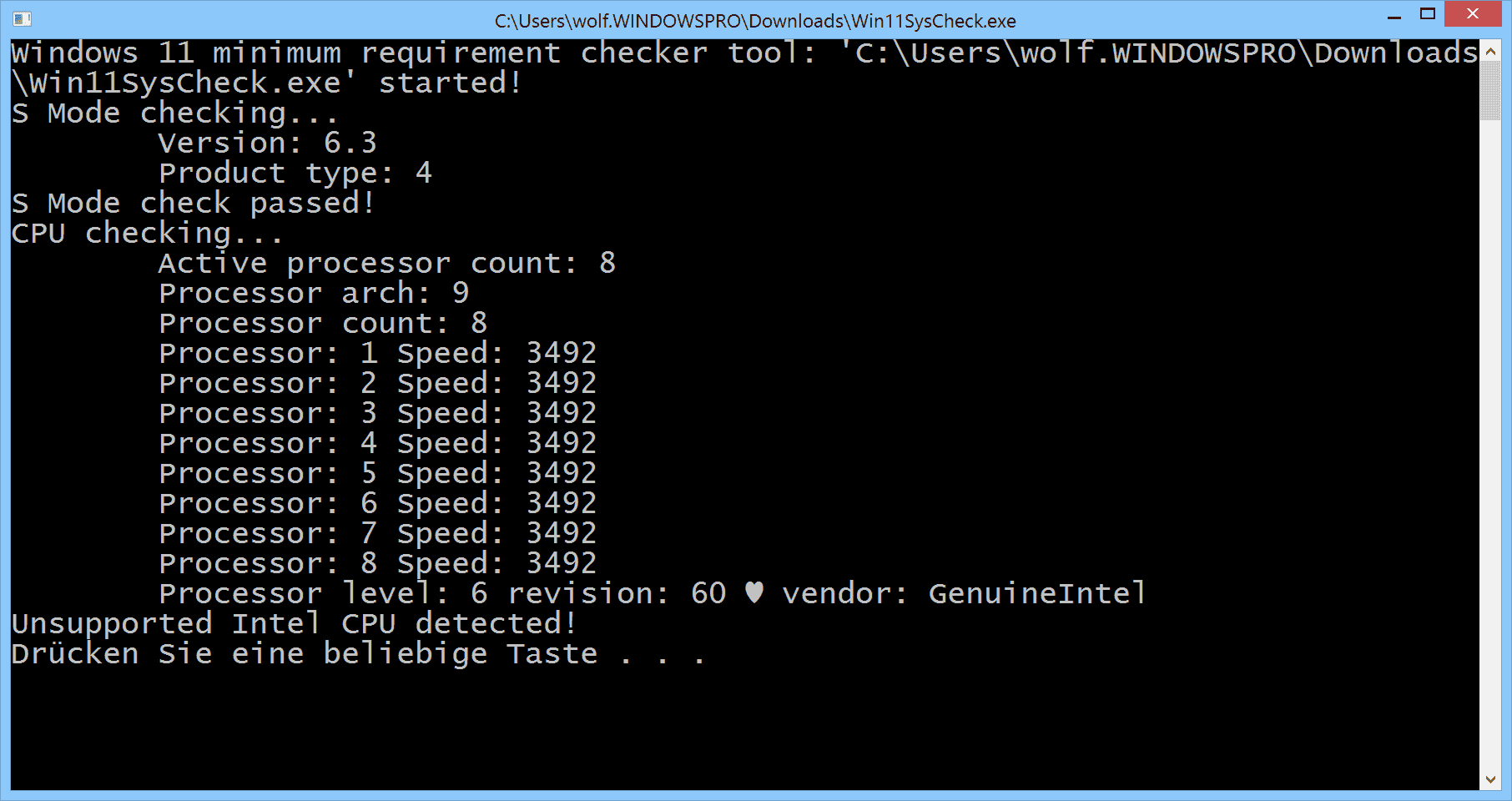 Hardware check for Windows 11 with Win11SysCheck 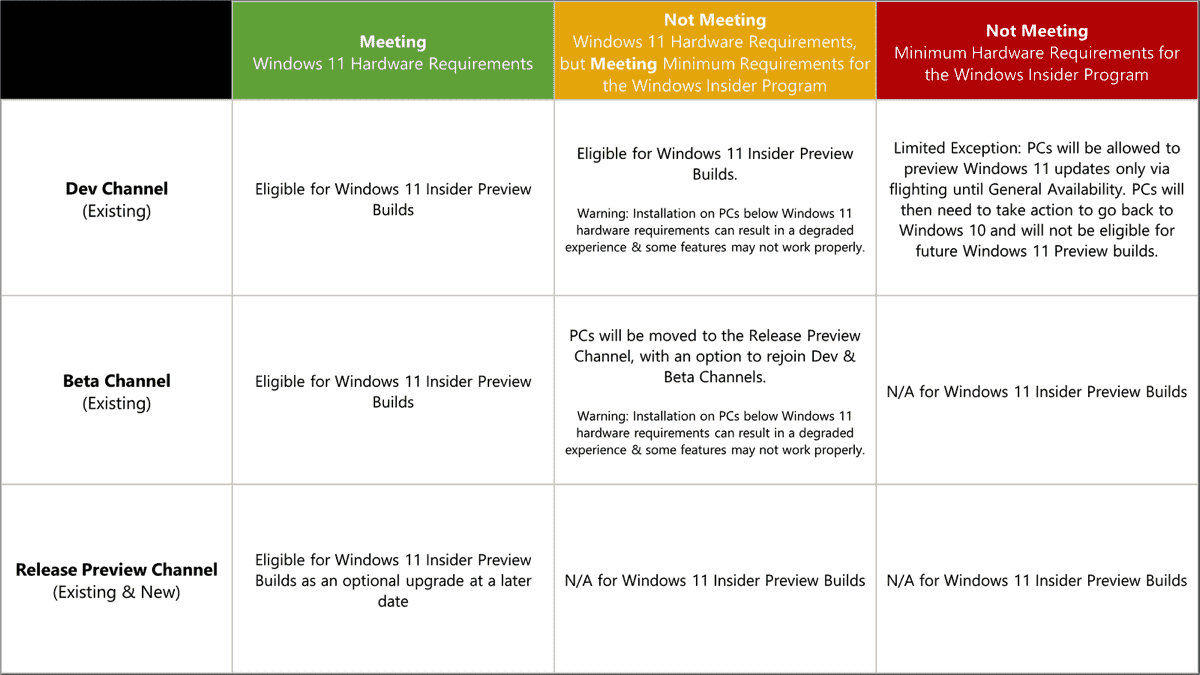 Hardware requirements for Windows 11 in the various insider channels

Even PCs that meet neither the CPU nor the TPM conditions are supposed to be allowed, but they will have to be reset to Windows 10 when the official release of version 11 reaches the market.

What was a de facto reality with Windows 10 20xx is now official with version 11: Microsoft will only release one feature upgrade per year in the fall. The monthly cumulative updates, however, remain unchanged.

From a technical point of view, Microsoft handles migration to Windows 11 like a feature update for Windows 10. It can be rolled out in place using familiar tools, such as the Configuration Manager, WSUS, or Windows Update for Business (WUfB).

Compared to WSUS, WUfB has the advantage that it only offers an upgrade to devices that meet the technical requirements. It also allows insight into the safeguard holds. Hence, it provides information about which components have prevented the installation.

In addition to the update intervals, Microsoft is changing the support periods. Windows 11 Home and Pro will be supported for 24 months instead of 18 months. For the Enterprise and Education editions, this period will be extended from 30 to 36 months.

There is currently no information on whether Windows 11 will also be released in a long-term service channel (LTSC). Under Windows 10, LTSC is known to receive 10 years of support.

Since many companies will have to invest in new hardware, they might be interested in knowing how long Windows 10 will be available. A longer transition period would ensure that many older computers can be retired as part of the normal life cycle.

Microsoft announced version 21H2 of Windows 10 along with Windows 11. The last release of Windows 10 Enterprise Edition would then normally receive 30 months of support, like all fall updates, so its support would expire in mid-2023. For the Pro versions, it would end one year earlier.

In this document, Microsoft promises users that they will not only receive security updates for Windows 10 until 2025, but also regular minor improvements.

This statement does not refer to a specific edition, but it must obviously apply to the semiannual channel (SAC), because in the LTSC, support for Release 1809 does not expire until 2029. In addition, Microsoft subsequently announced another LTSC edition for fall 2021, which would then be supported until 2031.

There are to be no changes in licensing. Volume licenses purchased for Windows 10 will also be valid for the upgrade to Windows 11. The same applies to the various Microsoft 365 subscriptions that previously included Windows 10. These also allow Windows 11 to be used.

For consumers, the upgrade to Windows 11 will be free of charge.

With Windows 11, Microsoft is forcing many organizations to modernize their PC hardware. TPM 2.0 as a prerequisite is acceptable, especially for company PCs, because security functions are increasingly based on it.

The debate was sparked by the high demands placed on the processor, even though old CPUs are hardly fully utilized by the typical use of desktops. It would not be surprising if Microsoft were to make concessions here.

It remains unclear whether the new update cycles and support periods are concessions to users, for whom the semiannual upgrades were mostly unpopular, or whether Microsoft has failed to deliver major innovations in such a short time.

The same applies to the actual end of Windows 10. The current messages are confusing, and it would not be surprising if Microsoft gave companies more time to switch in view of the investments that have to be made with Windows 11.