Mike Kanakos  Fri, Jan 18 2019Tue, Jun 25 2019  backup, group policy, powershell  35
The PowerShell script I discuss in this post creates a Group Policy backup in a different way than with the Backup-GPO cmdlet of the Group Policy module. With my function, it will be much easier to identify the correct Group Policy Object (GPO) in case you have to restore Group Policy settings.

Mike Kanakos
Mike is a Windows IT pro located in the Research Triangle Park area of North Carolina with 13+ years of experience as an admin and 20 years in the field. He specializes in Active Directory, Azure AD, Group Policy, and automation via PowerShell. You can follow Mike's blog at networkadm.in or on Twitter at @MikeKanakos.

Latest posts by Mike Kanakos (see all)
Contents of this article

Let's take a quick peek at the GPO-specific cmdlets included in the GroupPolicy module from Microsoft.

Let's a take a backup of a single GPO and see what the output looks like.

The BackupID is a 32-bit identifier that is unique for each backup. Its name matches the name of the folder containing the backup copy of the GPO. Microsoft does this so you can take multiple backups of the same GPO, save them in a common location, and separate them for later retrieval.

BackupID is unwieldy to work with in my opinion, especially if you are backing up more than one GPO. In fact, I would bet the default behavior most admins do is to backup GPOs in bulk on a regular schedule. Imagine saving a few copies of your GPOs to the same folder by BackupID and then trying to figure out which GPO is which. It is impossibly hard to manage. In this scenario, you end up with just a giant list of folders with unintelligible GUIDs. 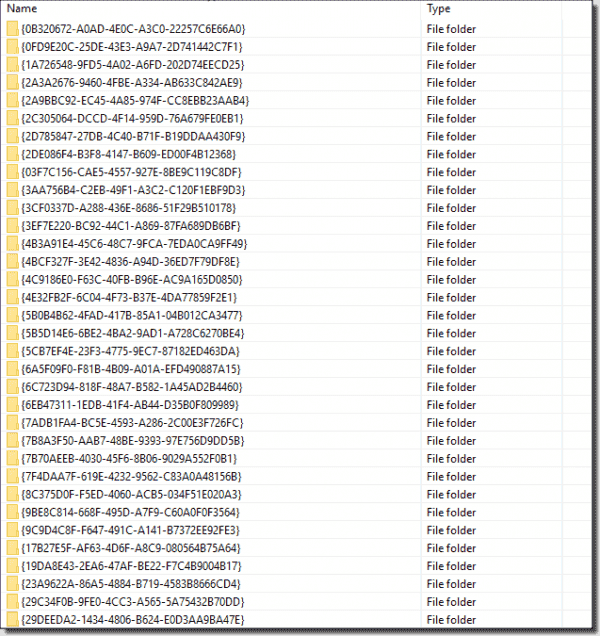 Backup GPO output of many GPOS

I got frustrated with this approach and set out to make a better backup that lists my backups by GPO name instead of BackupID. However, Microsoft still requires the BackupID for restoring the GPO at a later date, so I decided to append the GPO Name to the folder created by Microsoft's Backup-GPO cmdlet. This gives me the best of both worlds: the GPO name and the BackupID.

Since I am still using the Microsoft cmdlets to do the work, I will need to read the GPO info, backup the GPO, and finally append the GPO name with a delimiter to the newly created folder after the backup of each GPO occurs.

Finally, I want all the GPOs saved in a folder named after the backup date. For example, if I was backing up my GPOs to a network share named Group-Policy, I want a folder created called 2019-01-05 and then a subfolder for each GPO. Here's a screenshot of how it would look:

I also read the domain info and save it to a variable. I'll name these variables $Path, $Server, and $Domain. $Server is not the greatest name. Since we really need the name of a domain controller (DC) for the cmdlet to work, $DC would be better. But Microsoft used ‑Server instead of -DC or -DomainController in their cmdlet, so I will follow suit as well in my function to be consistent and avoid confusion.

The first thing I need to do is read the current GPOs and store the info so I can manipulate it later on:

Then I will need to create a folder to save the GPO backups to. Remember, I have the $path variable that contains the backup path.

I am using Out-Null after I create the folder to hide the output normally shown after the creation of a new folder. At this point, I have my GPO info stored in a variable and a date-based folder to save my backups to. Now I need to perform the backup and manipulate the default GPO backup settings.

The process I'll be following is pretty simple. A loop will perform a backup of each GPO one at a time. The backup will write the data to the location specified in the $UpdatedPath variable and simultaneously save the backup metadata to some temp variables. After the backup of a GPO finishes, the process will then append the name of the GPO to the folder just created. That process will continue for each GPO in my domain.

Now's let's put all of these bits together into a complete script:

You can run this function as needed or schedule it to run regularly via a scheduled task or a scheduled job. Once scheduled, it's one less thing you have to perform manually each month. If you work at a company that uses GPOs heavily, this function may take a good bit of time to run. I have approximately 150 GPOs in my employer's domain, and the script takes just a few short minutes to complete. The script will show the name of each GPO it's backing up when running it, so you can get an idea of how much work it has completed.

I built this function because I was not happy with the default output from the built-in Microsoft tools. That's what makes PowerShell so great: if something doesn't work as expected, you can build your own tool! My hope is that this tool will become a useful addition in your sysadmin arsenal. Be on the lookout for a follow-up article that walks you through the restore process using a script I wrote that was designed to do restores specifically from the backups created by this tool.

Last but not least, all my scripts are constantly under revision as I find new ways to improve them. You can find the latest version of all my scripts at my Github PowerShell repo. Let me know what you think in the comment section below. Thanks for reading!