Wolfgang Sommergut  Thu, Dec 9 2021Fri, Jul 15 2022  3
Windows 11 has introduced a number of new group policies. After the recent release of Windows 10 21H2, it appears that it has inherited some of these settings. However, the group policies for Windows 11 are not backwards compatible, which makes managing mixed environments more difficult.

When Windows 11 was launched at the beginning of October, Microsoft documented the new group policy settings in its familiar reference spreadsheet. This showed that Microsoft added around 60 settings to the new OS.

At that point, Windows 10 21H2 was still in preview, so it wasn't clear which of the new options would be included in this OS. The guessing is over now that the related ADMX templates and the group policy settings reference are available.

Ideally, Microsoft would have simply adopted some of the new settings from Windows 11 in 10 21H2 so that both versions could be managed with a single set of ADMX templates. But unfortunately, Microsoft doesn't want to make life that easy for admins.

In fact, a closer look reveals that Windows 10 21H2 includes some new settings that are not included in Windows 11. The reverse is true, anyway, because the newer OS offers additional features that group policies have to match.

Using a PowerShell script to find the differences between the administrative templates for Windows 11 and 10 21H2, I discovered that the following settings are not included in Windows 11:

The absence of #1 can be explained by the fact that IE is no longer on board as a standalone application in Windows 11. However, if you want to manage a mixed environment with the latest ADMX via a central store, then this setting can no longer be edited if it has been activated in existing GPOs.

Setting #3 refers to the IE mode in Edge ("Zoom for HTML dialog boxes"), which is also supported in Windows 11. Why it can no longer be configured there via GPO is unclear.

The warning about an outdated Edge with #6 has also been dropped. It is no longer needed in Windows 11, as the Chromium version of the browser has been on board from the very beginning. However, this would also be desirable in mixed environments.

The setting under #4 was introduced by Microsoft to mitigate the PrintNightmare vulnerabilities in the Windows spooler. It disables Point and Print for standard users. This option is included in the Windows 10 21H2 templates, but not in Windows 11. There, it can only be obtained via SecGuide.admx from the Security Baseline.

The settings for Windows Defender Antivirus are inconsistent, too. Windows 11 includes several new settings for this security component, for example, for the exclusion of certain IP addresses or the scanning of scripts. The latter was included in the baseline as best practice. 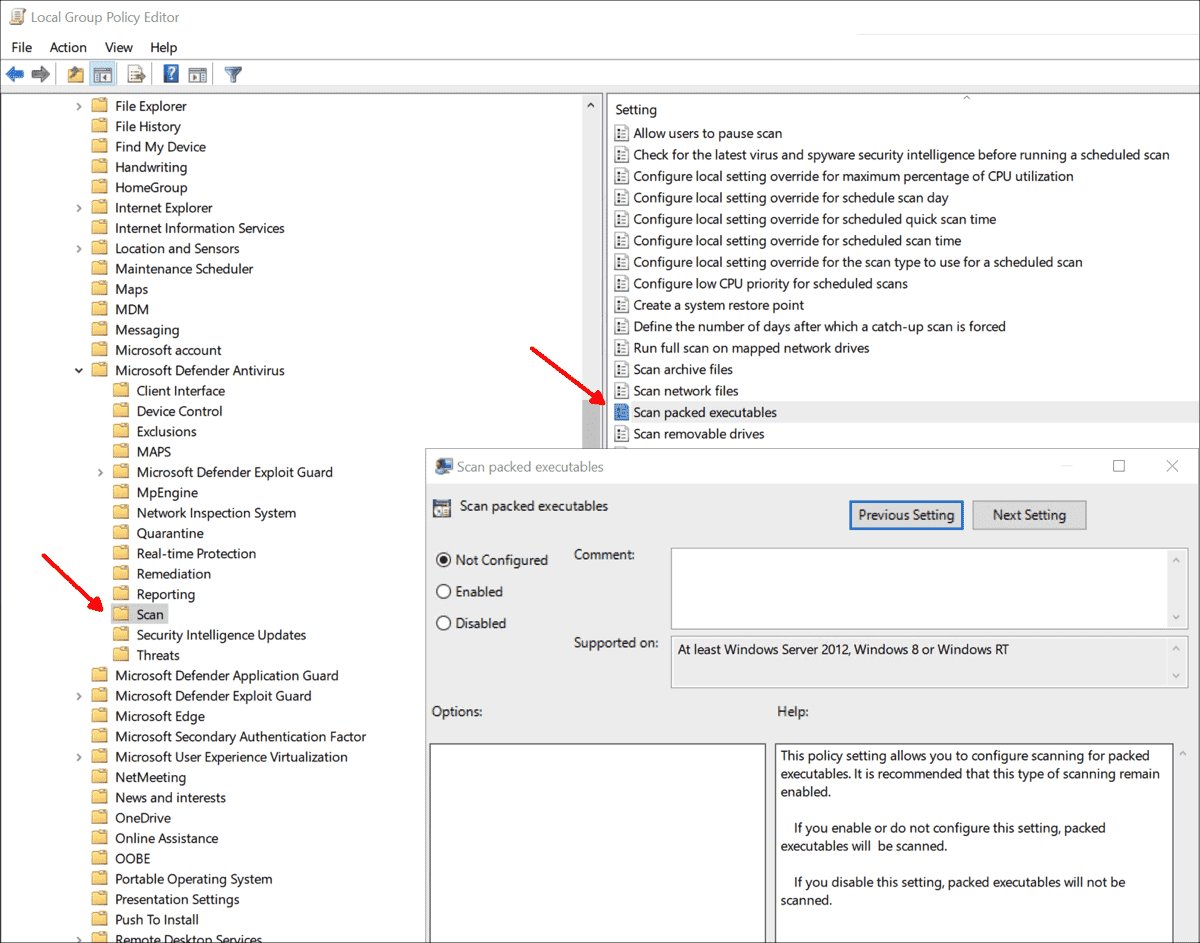 These are missing in Windows 10 21H2, but this OS gets the option to scan packed executables. Again, this option is not present in Windows 11—even though it only requires Windows 8 or Server 2012 according to the "Supported on" field in the GPO editor.

The list of group policies reserved for Windows 11 is much longer. These include all options in the following templates, which were not shipped with Windows 10 21H2:

Contrary to expectations, support for DNS over HTTPS (DoH) isn't included either. 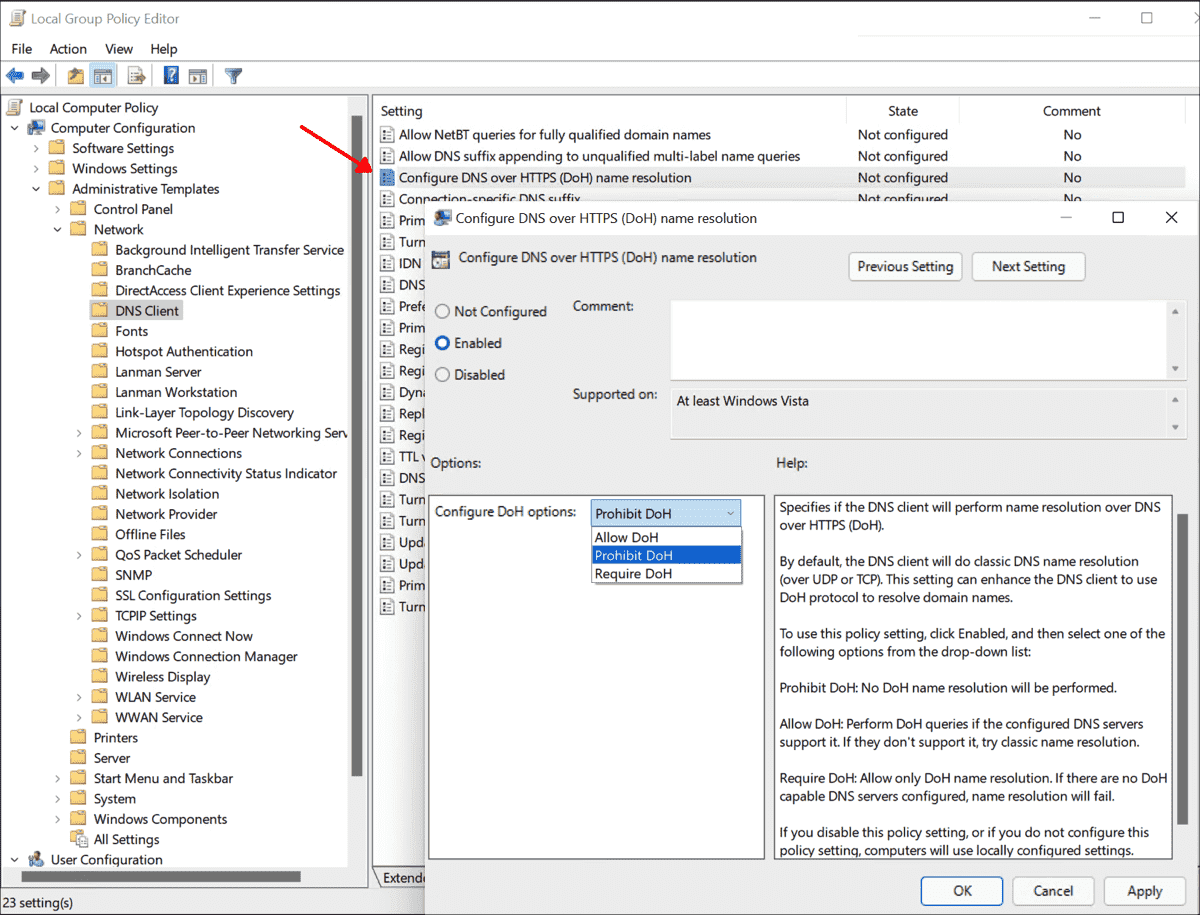 However, some interesting innovations have made it into the latest iteration of Windows 10. These include, above all, the possibility of whitelisting devices that users are allowed to install as well as the configuration of different sources for updates depending on the type ("Specify source service for specific classes of Windows updates"). 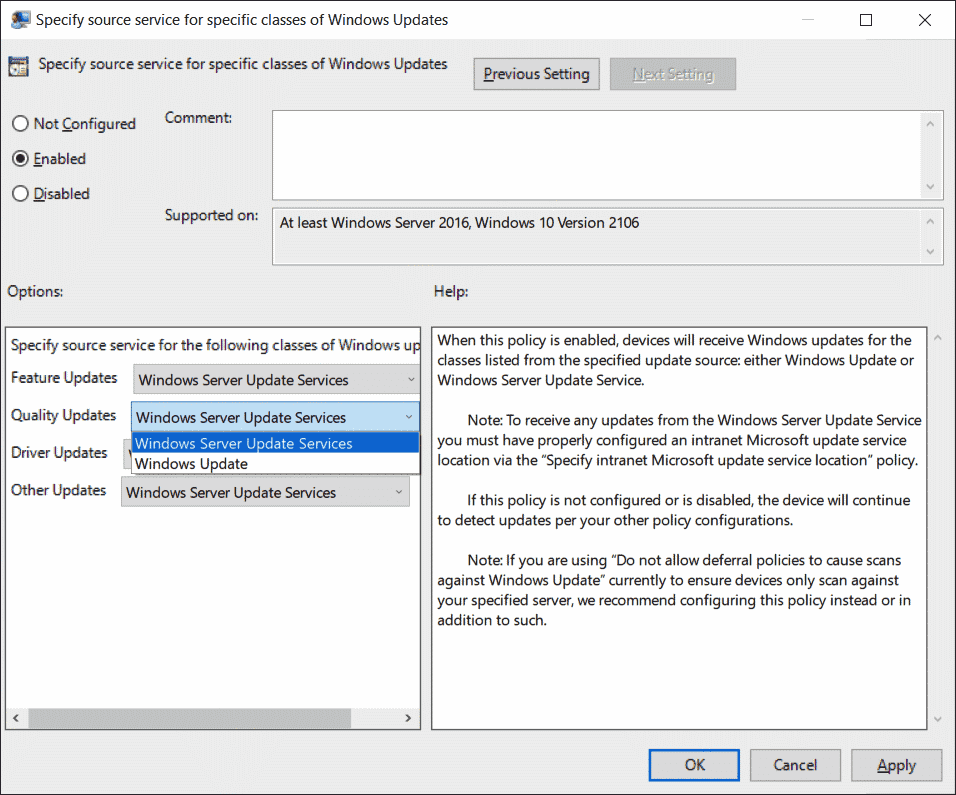 Since there are now many outdated settings for Windows Update, Microsoft has cleaned up the options for this feature in Windows 11 by means of a new folder structure. Unfortunately, Microsoft missed the opportunity to adopt this for Windows 10 21H2 as well. Instead, you still get a long, flat list with numerous irrelevant entries. 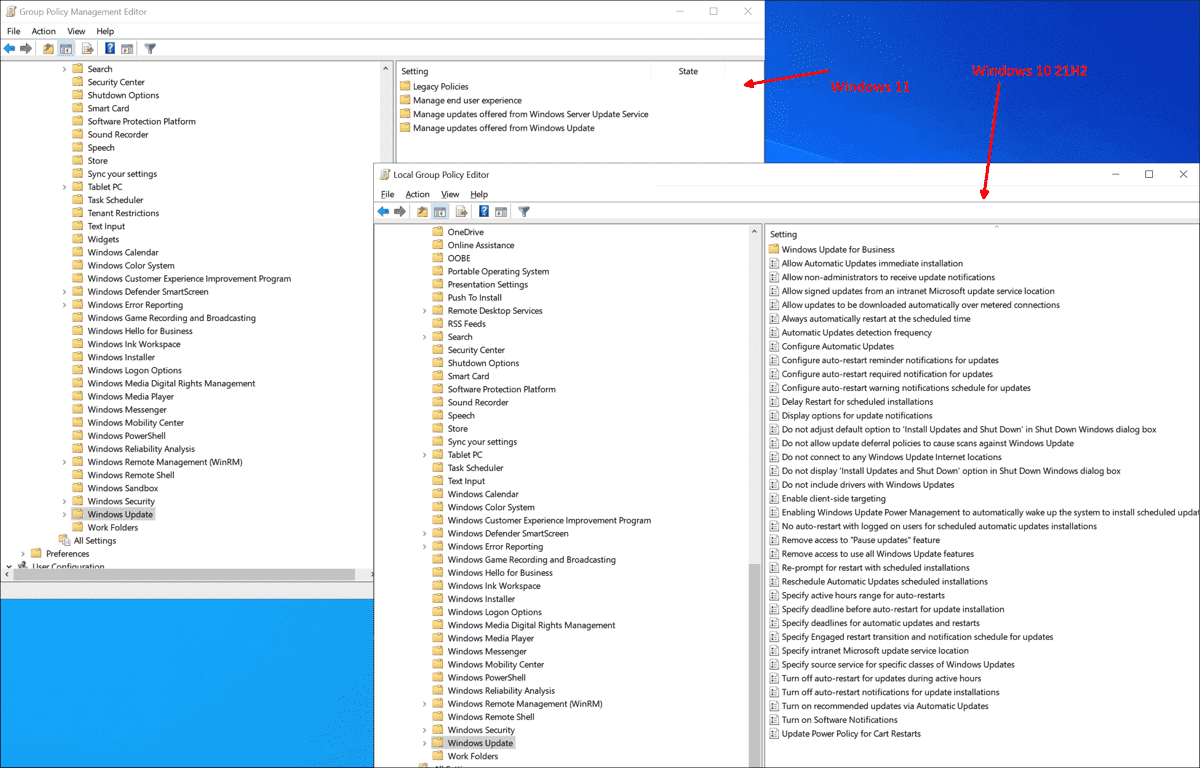 Windows 10 21H2 contains not only a subset of the group policies from Windows 11, but also those that do not exist in the new OS. This makes it difficult to manage mixed environments.

If you don't need the few exclusive settings of Windows 10 21H2, you can switch to the ADMX of Windows 11 right away. Otherwise, you have to manage one of the two operating systems via a specially configured workstation. There, you can prevent the templates from being loaded from the Central Store by setting the registry key EnableLocalStoreOverride.

The following list contains settings from Windows 11 that are not included in 10 21H2. The list is the result of comparing the ADMX templates, which are common to both systems. Thus, they do not take into account the four templates mentioned above that are missing in Windows 10.

Path: \en-us\WindowsDefender.adml
Value: This setting controls whether Network Protection is allowed to be configured into block or audit mode on Windows Server.

Path: \en-us\Taskbar.adml
Value: Configures the Chat icon on the taskbar

Path: \en-us\AppxPackageManager.adml
Value: Do not allow sideloaded apps to auto-update in the background

Path: \en-us\AppxPackageManager.adml
Value: Do not allow sideloaded apps to auto-update in the background on a metered network