Goverlan: An on-premises remote support software for IT Management

The software allows administrators to perform a very large range of tasks on remote machines and enables IT staff to manage systems behind the scenes without interrupting end users. Goverlan lets you easily deploy software, manage Active Directory (AD), create and run scripts, automate complex tasks, and adeptly handle the remote control of desktops and servers.

Goverlan has a simple-to-understand licensing model based on the number of support techs using the product concurrently (i.e., the number of techs logged into the console at the same time). You don't have to worry about license counts based on the amount of end nodes, domains, or clients you manage. So if you have ten helpdesk techs, but you only expect to have four techs using the software suite at any one time, then you only need four licenses.

Once you have settled on how many licenses you need, you can then choose between three different editions: Standard, Professional, and Enterprise. The pricing starts at $29/month per tech for the Standard suite, $69 for Professional, and $129 for Enterprise. you can visit Goverlan’s product page to get the detailed list of features available with each edition.

I'll start by saying this product has a huge set of capabilities. I'll point out some of the strongest points to know about Goverlan, but I won't be able to cover every detail about this product because it does a lot, which is a good thing. I recommend that you download their free trial and run it for a month. You can also schedule a personalized demo online to really see all the best features this product has to offer.

One thing I really love about Goverlan is the modern look and feel of the software suite. The console is well thought out and very intuitive. The attractive interface expertly displays the many options available without overwhelming you. The software interface is fast and very responsive, and it dynamically generates the views. 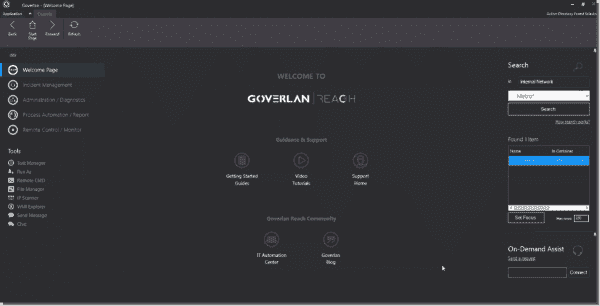 The left-hand side of the console contains the main areas of the software suite: Incident Management, Administration and  Diagnostics, Process Automation, and Remote Control. The right-hand side has a very useful and intuitive search interface usable in many different ways.

One of the really interesting pieces of Goverlan is that you can set it up to use your existing AD environment. This feature enhances AD by adding on functionality not possible in AD natively. For example, the AD integration lets you see the same exact tree structure as in AD, but one super slick feature of the Goverlan console is that it keeps track of everywhere a user is logged in.

When you find a user, you also see every workstation or server that user is currently logged into. From there, you can easily perform actions against any of those computers. For example, you can open a remote cmd prompt on any PC in the domain, chat with a user, share files, look at Task Manager, or push scripts.

All of these actions are enabled by default after deploying an agent to the workstation; there are no settings to configure or group policies to modify. Goverlan makes it super simple to have nearly full control over any computer node in the domain as well as off-site domain-joined PCs.

So helping users overseas on business trips becomes a simple task because all the same options are available just like when they are in their local offices. Goverlan can also figure out recursive group membership (groups nested inside groups), making it easy to understand the full list of people or PCs that may have access to a computer, file share, or network resource. 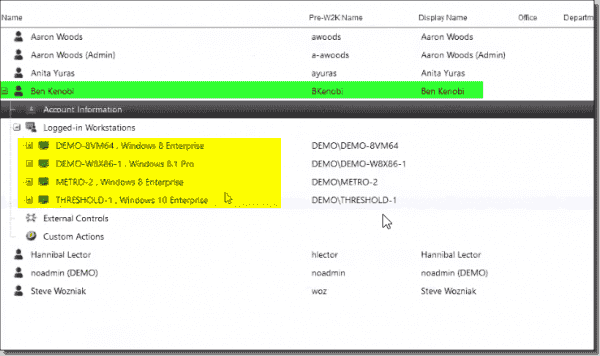 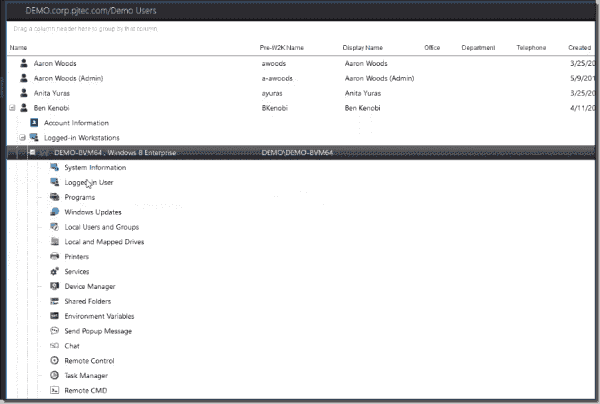 Goverlan is very adept at connecting remotely to end-user PCs and servers. The tool has many options available to troubleshoot issues and make changes on remote PCs either interactively (remote control) or silently behind the scenes (remote configuration). The tool is aware of all sessions and users logged into any node and can easily impersonate any logged-in user. For Citrix and Remote Desktop Services-type environments, Goverlan lets you remotely connect as an admin or any other user logged in. Once connected, you can view session-specific info about each user, such as printers and mapped drives, which you can configure differently per session and per user. Goverlan easily allows you to see the mapped drives and disconnect or map new ones. 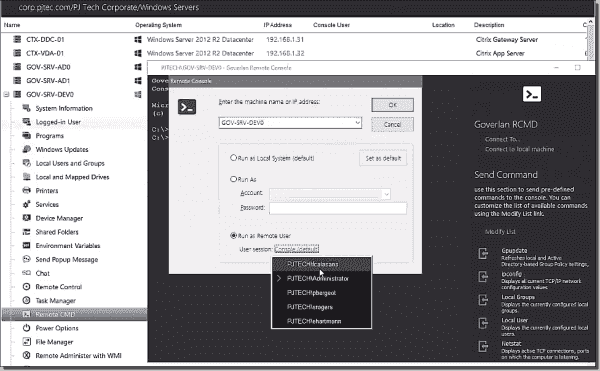 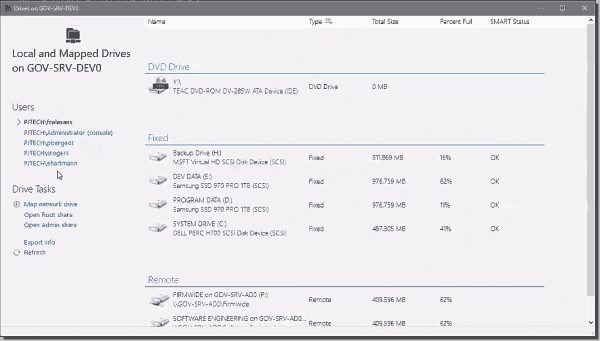 I have been following a somewhat typical order here that mimics how most troubleshooting occurs. First, we browsed for a user in AD, and then we connected to the user's PC. Once on that PC, we were able to access the specific information about the user session. At this point, maybe we know what the issue is and what we need to do to resolve it. Maybe that resolution is to deploy a script or software.

Maybe we need to install a patch remotely. The Goverlan console lets us skillfully handle these tasks and others. Let's look at a common example: installing or updating Java on a remote machine. One really nice feature available is the ability to build custom actions.

In our example, we have prebuilt a custom task to deploy Java 8 and make it available as a one-click option when connected remotely. We can make these custom actions as simple or as complex as we like. The engine to create that action is very intuitive and allows people who are not hardcore scripters to create software packages with ease. 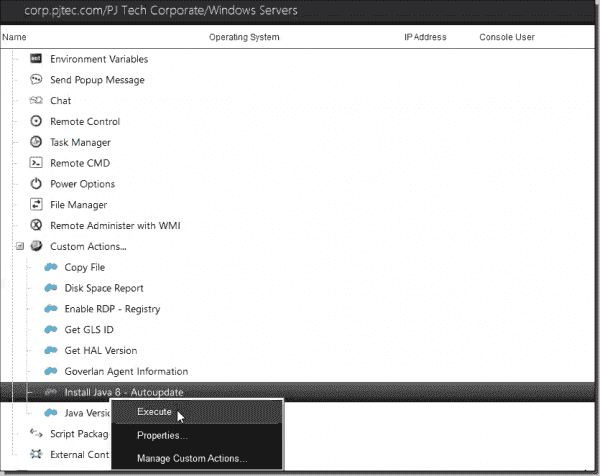 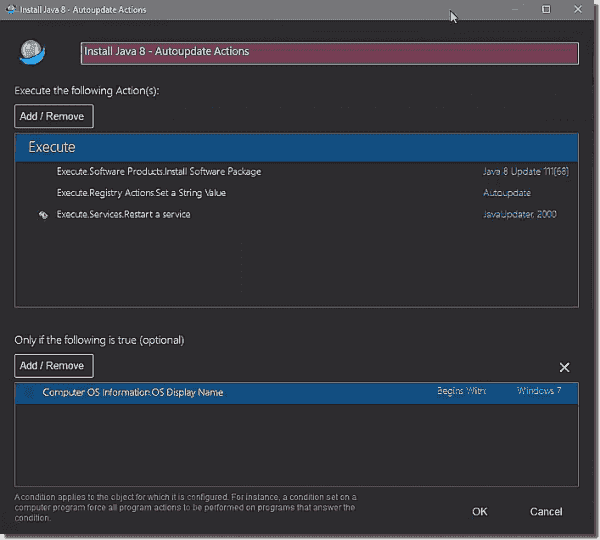 The automation engine built into Goverlan is nearly limitless in its abilities and the options available to query against. When reviewing this software, I was able to build a number of different types of software installers and scripts I could deploy to one or many machines. There is certainly enough there to spend an entire article about detailing all the options available. In this area, it's worth your time to sign up for a demo and start seeing the possibilities for yourself.

It is also worth noting that Goverlan has a repository of prebuilt actions you can reference if you are struggling to build your action. Also, if you already have a cache of scripts ready to deploy, you can simply push them through Goverlan and not have to reinvent the wheel. This also makes it easy for junior staff to run complex scripts without worrying about how the script works and interacts with the machine. 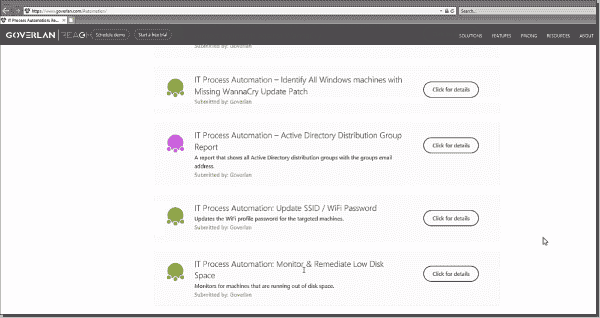 Goverlan tech support has built a number of useful process automation tutorials on their website, and if you are having difficulties, they are happy to help you figure out how make these actions work as you'd expect. 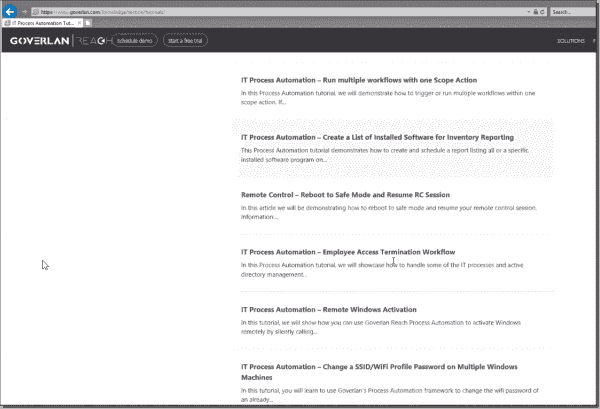 Goverlan also has the ability to interact with the Windows Update client on a remote PC. All the options available via Windows Update are available remotely as well. You can query for missing updates, deploy just security updates if that's what you prefer, and kick it off. You can also see the update history and generate reports as well. 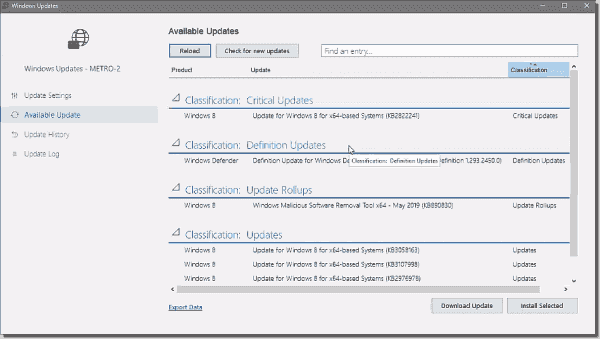 It's time to let you in on a little secret: I hate filling out incident tickets. For me, it's one of the most boring parts of doing infrastructure support, and most people I know find updating tickets with details very tedious. The latest release of Goverlan has a new feature, and when I first saw it, I said to myself, "Oh man, I wish I had that feature available to me!"

Goverlan can integrate natively with helpdesk/ticketing systems. Imagine going about your day solving issues in Goverlan and not having to update tickets with all the miscellaneous work notes! Goverlan audits every action any user performs using the software. From there, they built the integration to take those audited item actions and send them straight to the ticketing system, updating the tickets on your behalf as you do the work.

When the issue is resolved, the ticket notes detail all the steps you performed, effectively saving you the trouble of having to remember everything you did after completing the work.

Today Goverlan works with Jira; ServiceNow, FreshDesk, ZenDesk, ConnectWise, and others are coming in the near future. Let me show some examples of what the integration looks like. Let's start with viewing all the open tickets from Goverlan. 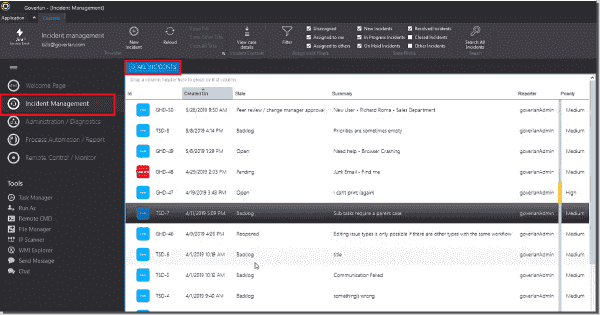 Jira tickets in the Goverlan console

You can browse or search the list of tickets and case notes right from the Goverlan console. Once you find the service or incident request you want to work on, you can open it and view its status and relevant work history. The view presented in Goverlan is a minimalist view of the actual ticket, but it contains enough information for the tech to work the ticket and understand the history. 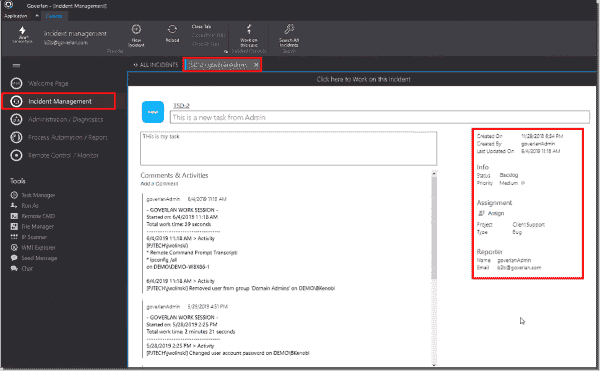 Once you want to do some work, you can click the top of the ticket notes and open what Goverlan calls the "Work Canvas."

You would then do your normal work in Goverlan, and it adds all the work you perform to the Work Canvas, which then adds the notes straight to the ticket back in Jira. When you finish your work, Goverlan has filled in all the work you did, freeing you from having to update the ticket after performing the work. 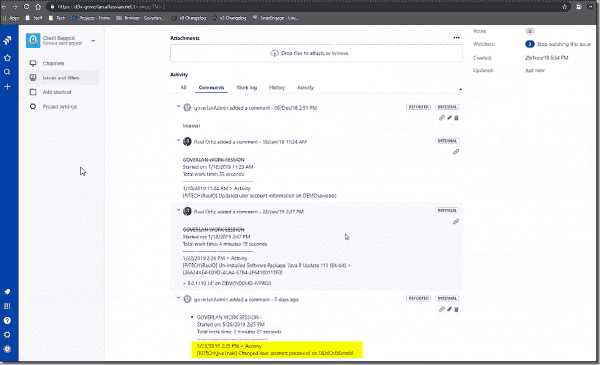 I don't personally think I have seen the helpdesk ticket integration feature anywhere else, and I think it is one of those light bulb features; once you see it, you wonder why more vendors haven't done it already. Updating trouble ticket notes with the audit data from the remote management tool seems like an absolute no-brainer. I think Goverlan is onto something special here with this feature set; it really is a game-changer for documenting work performed. You don't appreciate it until you don't have to do the ticket notes anymore.

I mentioned earlier that I wouldn't be able to cover in depth all the great features Goverlan has to offer. I hope by now you have seen at least enough to want to see more. Believe me when I say there is a lot more to see! Goverlan is a suite of tools you can easily set up and start using very quickly. The tools make it very easy to do complex tasks and solve all the issues that IT encounters on a day-to-day basis.

In my opinion, the product is really well done and excels at the tasks it aims to simplify. I have seen many remote control and remote management tools in my career, and this product seems about as solid as any I have used to date. Goverlan definitely hits that sweet spot between ease of use and functionality. The tools, the website, and the support team are all first-rate. If you are looking for a tool to streamline your IT operations, Goverlan should be on your short list of software to review!