Goodbye Windows XP – Or not?

Kyle Beckman  Thu, Mar 13 2014Tue, Mar 25 2014  deployment  0
Windows XP End of Support is upon us, but that doesn’t necessarily mean End of Life for this operating system. In this series, we will cover how to deal with the Windows XP machines in your network after April 8.

April 8, 2014. Are you getting tired of hearing that date yet? Depending on when you read this article, that date may have already passed. Either way, if you have Windows XP sitting on your network, you’ve reached the point where you’re going to have to do something about it. 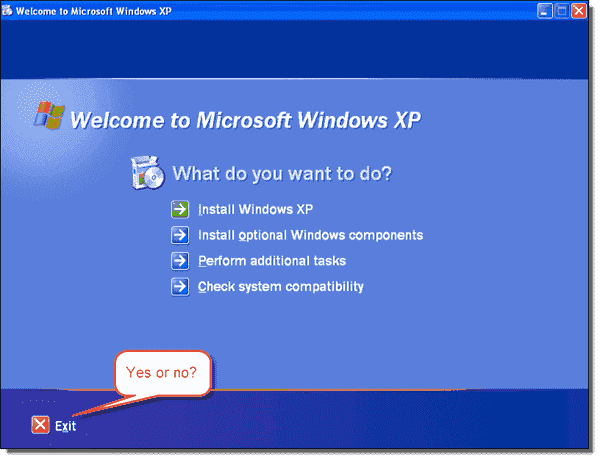 Here at 4sysops, we have seen all the same articles, tutorials, tweets, videos, and so on telling us that we have to get rid of Windows XP as fast as we possibly can before April 8, 2014, or the sky will come falling down on us. No, seriously… Earth will stop spinning and chunks of whatever will fall from the sky, and the sky itself will come falling down if you don’t get rid of your XP, people. Okay, maybe not, but still… Upgrade, upgrade, upgrade to a more “modern” operating system. [Random thought: Is anyone actually upgrading (or would it be downgrading?) to Vista? Seriously. There’s got to be someone doing that, right?]

All joking aside, that’s easier said than done, right? At this point, a good percentage of your computer infrastructure should meet the hardware requirements to run Windows 7 or 8.x without issue. Now, it’s just a matter of upgrading/replacing the Windows XP on the box for something more current. There’s tons of guidance out there (including here on 4sysops) on how you can build automated installs of the latest and greatest Windows operating systems without having to pop in a DVD or a USB drive and do it all by hand. Even then, depending on the number of XP boxes you have left, upgrades can and will be time consuming, and many organizations will still have Windows XP running after April 8.

So what happens when support ends? Everyone should know by now that the updates for XP will stop unless you want to pay Microsoft for support. Reports so far have been that quotes for post–April 8th support are expensive and require a plan to get off of XP. Interestingly enough, activations for retail copies of XP will continue.

The biggest thing that should concern you (and your organization) is the possibility that attacks against Windows XP will increase. April 8, 2014, isn’t going to be the problem; May 13, 2014, will be. Why May 13th? That day is the first Patch Tuesday after XP’s end-of-support deadline. Why is that important?

As you may have noticed, many of the updates that are released for the newer versions of Windows are also released for older versions. That means that a bug or security issue that exists in Windows 8 may have originated in an earlier version of Windows, like Windows 7, Vista, XP, or even 2000. A security flaw that existed in Windows XP that exists today in Windows 8 won’t be fixed in XP. Someone with the right know-how could use the security advisory or even reverse engineer the Windows 8 hotfix and use it to create code to attack Windows XP.

This brings us back to getting rid of our Windows XP boxes. Aside from the time issue of upgrading or replacing those systems, the other major hurdle organizations are going to have to deal with are all of those legacy applications that only run on XP. (Oh, and they are mission critical, right?) So what do you do with those XP applications that you can’t upgrade for one reason or another that someone or something in your organization can’t live without? This will be the topic of my next post.

Before you can decide what to do with your Windows XP machines, you might want to find out first how many Windows XP computers you still have in your network.