Wolfgang Sommergut  Mon, Nov 4 2019Mon, Nov 4 2019  deployment, storage, windows 10  0
Since Microsoft acquired FSLogix, most companies now have an alternative for managing user profiles that is available at no additional licensing cost. FSLogix overcomes some shortcomings of the onboard tools and improves the user experience with Microsoft's Remote Desktop Services.

Roaming profiles, the proprietary Windows technology for transferring profiles between different computers, come with some well-known limitations. In particular, these include long delays for logons and logoffs when large amounts of data must be copied over the network.

This weakness is especially noticeable with non-persistent virtual desktops, because they need to load the entire profile after each start. On session hosts, you might configure separate user profiles, which are also copied back and forth between network shares and local drives.

To mitigate the problem of this outdated technique, many admins combine server-based profiles with folder redirection to reduce the amount of data that must be sent over the network when logging on and off.

Due to the limitations of roaming profiles in conjunction with terminal services, Microsoft has offered User Profile Disks (UPD) as an alternative since Windows Server 2012. UPDs store the user data in a VHD(X), which is then mounted into the respective user session.

FSLogix as an evolution of UPD ^

FSLogix Profile Containers also use the approach of offloading profiles onto virtual disks and attaching them to the session as soon as a user logs on.

At logon, FSLogix mounts the VHD(X) with the user profile into the session

In doing so, it avoids the following disadvantages and limitations of Microsoft's technology:

On the other hand, FSLogix Profile Containers can be mounted on any computer, regardless of whether they belong to the same host collection or they are physical desktops.The tool also allows simultaneous (read) access to the profile if the user is logged on to more than one session.

Finally, you can save the search index in the container so that it is immediately available the next time the user logs on.

FSLogix is explicitly designed to keep Outlook OST files across sessions (OST files are those in which email, tasks, and calendar entries are cached). The same applies to OneDrive's caching, where the entire content would have to be re-downloaded for every session in non-persistent environments.

For functions related to Outlook and OneDrive, FSLogix offers its own Office 365 containers. They are primarily intended for users who already have another profile management solution in place, but would like to improve the user experience of office applications.

Profile Containers offer all the functions of the O365 containers. You can use both types side by side . This can be useful, for example, if you want to use different storage for Outlook caching.

Like UPDs, FSLogix also provides the option not to redirect certain directories to the virtual drive, but to leave them in the local profile. By default, this applies to the Temp and IE cache directories. Other folders can be defined in the redirection.xml file. 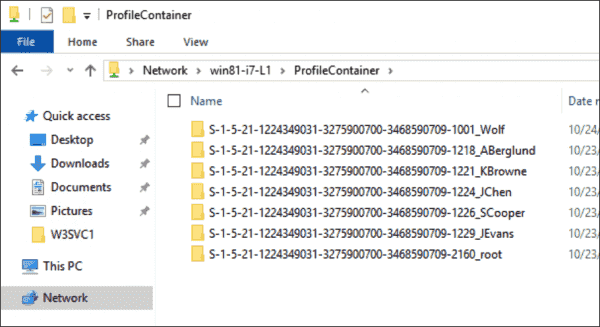 Depending on the requirements, folder redirection may be useful to redirect such locally maintained directories to a file share. This would make sense, for example, for documents that are frequently changed and regularly backed up. They can be recovered more easily from a file server than from a VHD(X) file.

A new feature of FSLogix is the Cloud Cache. Instead of a network path to a VHD(X) repository, it allows users to define up to four profile container locations to which all new and changed content is replicated. In addition to internal SMB shares, this can also be blob storage on Azure.

When activating Cloud Cache, FSLogix first writes all changes to the local profile

An advantage of this feature is the higher availability of the user profiles, as the failure of one storage system can be compensated for by a copy at another location.

This feature also changes the behavior of a profile container by temporarily storing files in the local profile. Write operations are always performed first against these local copies, which are then synchronized to all configured VHD(X). This enables applications to deal more effectively with short interruptions in the network connection.

Most of all, mobile users benefit from this feature. Cloud Cache makes the user profiles accessible from outside the company network when they are stored on Azure.

The option of storing multiple copies of user profiles in different locations can also be used for offline operation. For this purpose, Profile Containers are not only stored on the network, but one of them is also placed locally. After re-establishing the connection, the other VHD(X) repositories are also updated with the latest content. In a configuration like this, FSLogix also replaces Windows offline files. 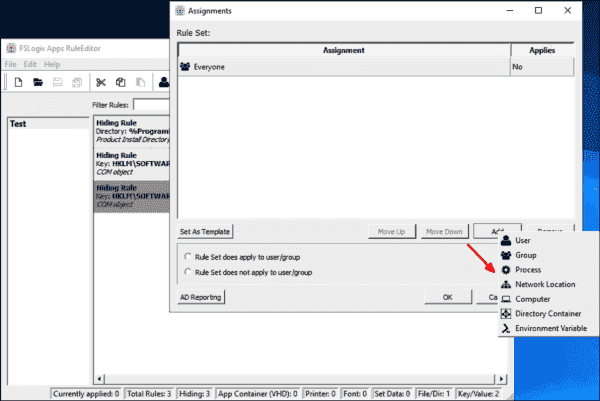 This should reduce the number of images necessary for virtual desktops. Different users can get a common image with various preinstalled programs, but each group sees only those resources assigned by the administrator. In this way, it is possible to avoid exceeding the number of existing licenses.

Finally, a Java Rules Editor is included in the package, which helps admins to determine which version of Java should be executed depending on the website or URL.

Microsoft makes FSLogix available at no additional cost to users who meet certain requirements. For example, these include RDS CALs so that companies are basically entitled to use Profile Containers on RD Session Hosts as an alternative to UPDs.

In addition, users may, among others, use FSLogix with the following licenses or subscriptions:

The software can be downloaded from Microsoft's website here.