The portable utility Wake-on-LAN Packet Sniffer is one of the simplest free tools I have ever tried. All you can do with it is launch it. And then you have to wait. You wait for Magic Packets. Magic Packets are shy creatures, but sometimes you can catch them if you boot up early. 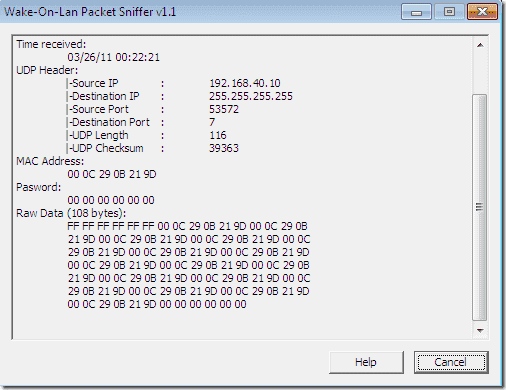 What I mean is, if a PC doesn't wake up even though you have bombarded the machine with Wake-on-LAN Magic Packet frames, you can boot up the machine manually, launch the Wake-on-LAN Packet Sniffer, and see if the Magic Packets really arrive at the NIC of this PC.

Usually, Wake-on-LAN tools work reliably in LANs. Problems often come up if you want to send Magic Packets across routers. This only works if the routers in your organizations are configured to forward broadcasts containing Magic Packets. Another cause of error can be the NIC, which is either not configured to accept Magic Packets or simply doesn't support Wake-on-LAN.

In the screenshot, you can see that the tool can even create pictures of these shy creatures. As I explained in my article about the free SolarWinds Wake-on-LAN tool, Magic Packets consist of six bytes of 255 (hex FF) followed by sixteen repetitions of the target computer’s MAC address.