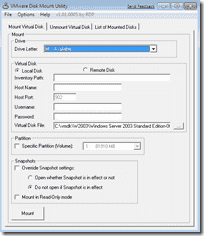 Earlier, I blogged about attaching VHD images and WIM files, so it is only fair that I introduce a tool that allows you to mount VMDK (Virtual Machine Disk Format) images. VMware's format is certainly one of the most commonly used imaging formats these days. The VMware DiskMount GUI is not, despite its name, a VMware tool. It is a DEVFRAM product, and simply consists of a graphical user interface for the command line tool VMware DiskMount (vmware-mount.exe), which is a part of the free VMware Virtual Disk Development Kit. As such, you have to first download and install this toolkit before you can use the VMware DiskMount GUI.

When you first launch the VMware DiskMount GUI, you have to tell the tool where to find vmware-mount.exe. If you installed VMware's toolkit in the default folder, then you can find it under C:\Program Files\VMware\VMware Virtual Disk Development Kit\bin\. The DiskMount GUI supports all of DiskMount's command line parameters, including those for remote virtual disks (ESX Server and VirtualCenter). 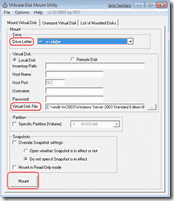 If you just want to mount a local VMDK file, it’s not necessary to fill out all the parameters in the "Mount Virtual Disk" tab. The ones you do need to fill out are marked in this screenshot.

If the virtual disk has snapshots, you will always have to mount the latest one. You'll find multiple consecutively numbered VMDK files in the virtual machine's folder. Mount the VMDK file with the highest number. If you try to mount another VMDK file you will receive a "mount error" message. Note that if you make changes to the virtual disk, and then revert to a snapshot, you will lose all of your changes.

The VMware DiskMount GUI appears to have an option for overriding this snapshot setting. However, when I tried the feature, vmware-mount.exe just answered with a list of available parameters. My guess is that older versions of VMware DiskMount supported this feature, but newer ones do not.

If you have never worked with VMware DiskMount, you might want to have a look at the manual first. It appears as a PDF file in the doc folder. It explains all of the parameters in detail, and gives you some information on how to use DiskMount. The most relevant details are: