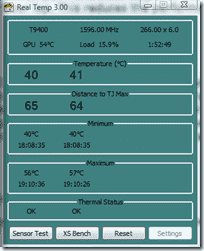 Real Temp is a standalone tool that is useful if you want to measure the CPU temperature on a server quickly because you don't have to install the program. Real Temp can display the temperatures of all CPU cores and the GPU (graphics processing unit) separately in the systray. This can be useful if you have to stress your CPU for some time, and want to stay informed about the temperatures at all times. 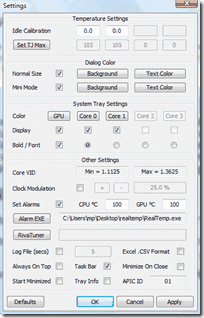 If you want to get an idea of how a heavy CPU load affects its temperature, you can use the tool's sensor test. It uses the free tool Prime 95, which you have to download first to strain your CPU. By the way, CPU killer is my favorite CPU stress tool.

Real Temp has two downsides. It only supports Intel processors, and only displays temperatures in degrees Celsius.