Did it ever happen to you that you wanted to move a file and you got the message “This action can’t be completed because the program is opened in another program”? I am sure it did. In most cases you know which application opened the file, but sometimes you are left in the dark. OpenedFilesView helps you to deal with these cases. I reviewed version 1.0 more than two years ago. The current 1.3 release has some useful new features. This is reason enough to write another post and add the tool to the 4sysops free admin tools list.

The main new features are: 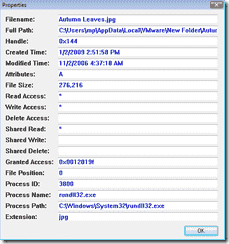 The last one is probably most interesting. Before this feature was added, one had to search for the problematic file in the OpenedFilesView’s user interface. Now you can access OpenedFilesView from the files’ context menu in Windows Explorer. This will open a window where you can close the file handles, kill the process that opened the file, or just bring the corresponding program to the front. The latter works only if the program has a user interface.

This context menu option can also be used for directories. OpenedFilesView is able to display all opened files in the corresponding folder and its subfolder. Moreover, you can perform the tasks mentioned above for multiple files. In this way, you make sure that moving a complete directory structure will work flawlessly. Because OpenFilesView works on the command prompt, you can also use it in batch files. Note that you have to enable the context menu option first.

The fact that one can now hide some open system files is useful because it reduces the number of listed files significantly. However, OpenedFilesView still displays too many uninteresting files. What’s missing is a feature that hides all opened files that were opened by Microsoft programs.

There are two downloads, a zip file and a self-installable executable. The install program only adds shortcuts to the system. The zip file contains the portable version, which seems to have the same features as the installable edition. The Windows Explorer context menu option also works with the portable edition.

If you want to play with OpenedFilesView, you could just open some graphics files with Paint. You won’t do any harm to your system if you kill its process. I don’t have to tell you that not all applications are as good-natured as Paint. Don’t blame OpenedFilesView if you crash your system by killing processes.