Some of you might remember Windows XP, one of the predecessors of Windows 7. One of the superior features of this popular operating system was the network icon in the systray. Contrary of Windows 7's network icon it was able to display the network activity with two little blinking monitors representing inbound and outbound connections. 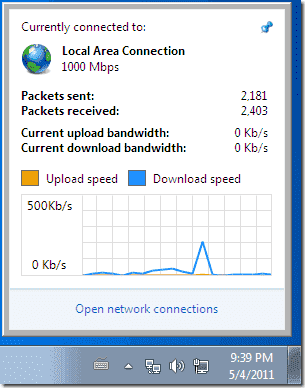 The main purpose of these monitors were to attract the user's attention that a network connection was established. The older readers know that, in the good old Windows XP times, dialup connections were the common way to connect to the Internet, and Internet service providers charged by the hour. Computers nowadays are always online, so the blinking monitors have become somewhat obsolete, which is probably why Microsoft replaced them with an admittedly simple network icon.

But I really miss Windows XP's network icon. The constantly blinking monitors gave me the feeling that my computer is a part of something bigger. The free Network Activity Indicator not only satisfies nostalgia needs, however. The tool can also display the currently used upload and download bandwidth. A single click on its systray icon reveals two graphs that represent upload and download speeds of the immediate past. And, like the Windows XP network icon, the Network Activity Indicator also displays the received and sent packets. However, it would be more useful if the tool showed the amount of transferred data in MB.

Nevertheless, those of you who are still claiming that Windows XP has superior features such as the blinking monitors have no more excuse to keep running an archaic operating system.

By the way, if you search the download link for Network Activity Indicator on its homepage, it is in the upper right corner.