In the past, defragmented disks were the major reason why computers became slow over time. Since Windows 7 and Windows Server 2008 R2 support scheduled defragmentation, this problem is no longer that serious. However, the fact that Microsoft offers a defragmentation API shows that room still exists for third-party tools. 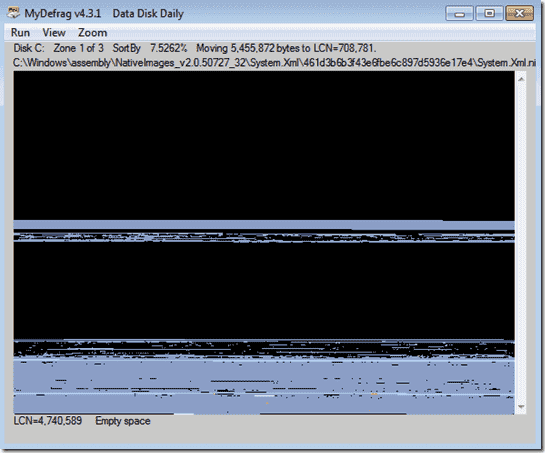 The website of the free defragmentation tool MyDefrag also addresses this topic. These are the reasons the tool's developers give for using MyDefrag instead of the Windows Disk Defragmenter:

Other things you can do in scripts is to only defragment certain file types, sort files according to various criteria (size, last access, last change, etc.) and advanced tasks like moving files from the NTFS reserved area to normal disk space. Check out the complete list of MyDefrag script commands for more information.

The defragmentation tool also distinguishes between data and system disks and can defrag flash memory disks. MyDefrag's graphical user interface doesn't belong to the best I have seen, but, I guess, this won't bother the scripting guys. I tested MyDefrag v4.3.1 on Windows 7.

What is your favorite defragmentation tool?