I’m particularly fond of the saying “A good sysadmin is one which never has to get out of his/her chair” and mRemoteNG is one of those tools that goes a long way in accomplishing that goal. This application acts a tabbed remote connection manager and credentials vault for a variety of connection protocols that include: 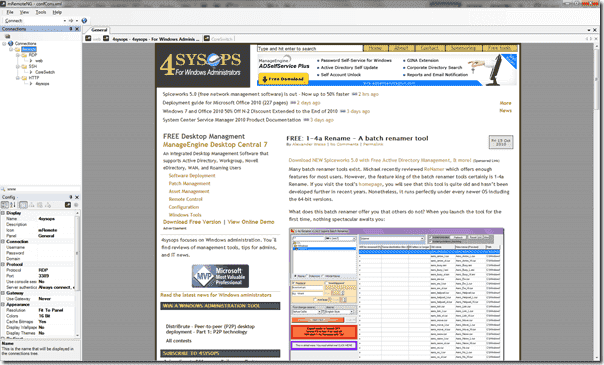 MRemoteNG is an open source fork of the original mRemote written by Felix Demel. That project was sold to the German company visionapp and is now sold under the name visionapp Remote Desktop, whose 2011 version just completed beta edition and should be released shortly. As an original mRemote user I watched development progress at a very fast clip until the visionapp purchase occurred after the release of version 1.50 when development and growth just stopped. I eventually purchased a license for the now commercial product which is nice but definitely different. Shortly after the beginning of 2010 development was picked up on mRemoteNG by Riley McArdle. While development has stagnated some lately there is hope for this promising project. 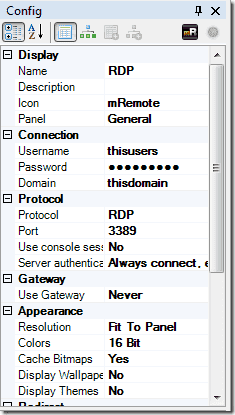 What makes mRemoteNG great is its flexibility to handle protocols and credentials. You have two basic objects in the configuration, folders and connections. You can apply any number of attributes to each, but what’s nice is that connections within folders can be set to inherit attributes from above. As an example, if you have 20 Windows servers that you connect to with a single set of credentials, you can define the protocol as RDP and insert your Windows credentials at the folder level and any connection below it will simply inherit its configuration from above; just give it a name and an IP or hostname. In fact, you can right click on any folder and tell it to import connections from Active Directory, giving you connections to each server in your datacenter in under a minute!

MRemoteNG is also available as a portable version. While there is an installer available which will handle any component installs, I generally choose to use the portable version which stores all of your configuration in an XML file and you can take its folder on a USB stick and use it anywhere. Some of the less commonly used protocols such as Citrix’s ICA will require installs on the host PC, but for most things it should work right out of the box.

The final feature set to cover for is its ability to hook into external applications. The remote connection manager allows you to configure command line applications used with variables to provide additional usage. For example if you have an RDP connection for a IIS webserver, you can configure an external app to use Filezilla to connect to that server using FTP and automatically connect with the credentials stored in mRemoteNG. The mRemoteNG support forum has a thread where people share their external apps configurations. You can define these external apps through the menu item under the Tools menu.

MRemoteNG is currently at version 1.63.