Michael Pietroforte  Fri, Jul 15 2011Fri, Jul 15 2011  antivirus  2
Kaspersky Rescue Disk is an offline antivirus tool that runs on Linux and allows you to repair a Windows installation with Linux tools.

After my review of Microsoft Safety Scanner, readers have recommended to look at Kaspersky Rescue Disk. The offline antivirus tool can be launched from a boot CD or a bootable USB stick. 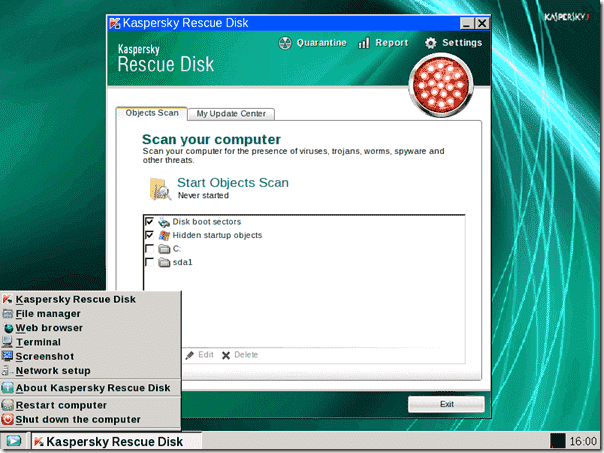 As with most offline antivirus tools, Kaspersky Rescue Disk boots up Linux. Of course, you can also scan the NTFS and FAT partitions of a Windows installation. Nevertheless, the disadvantage of Linux as the base operating system is that you might run into driver issues. I wasn't able to try the graphical user interface of Kaspersky Rescue Disk because left clicks with my mouse didn't work. However, Kaspersky's text-based Rescue Disk worked fine.

After Linux informs you about every tiny bit that has been loaded, Kaspersky launches Midnight Commander, a Norton Commander clone. If you were an admin in the good old DOS times, I am sure you still remember the important shortcut keys: the function keys F1-F9 are for various file manipulation tasks; CTRL + I lets you switch between the left and the right pane; CTRL + O removes the Midnight Commander panel and gives you full access to the Linux command shell. 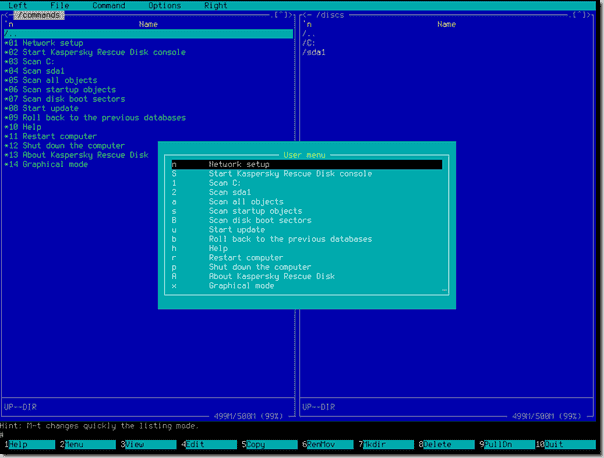 If you are a Linux geek, you will like that because this allows you to repair a Windows installation with Linux command line tools. To edit files you can use the text editor nano. The drives of the host system are mounted under /discs. Of course, you can also use Midnight Commander to copy, delete, and edit files.

And yes, you can scan for viruses with the Kaspersky Rescue Disk as well. The command folder has some shell scripts that allow you to scan all files in a specified drive, scan all objects that can be infected by virus (executables), scan all startup objects, or scan disk boot sectors. The offline antivirus tool also supports online updates.

If you want to scan only specific files or folders, you have to run kav.exe on the command shell. The command "kav.exe /?" displays information about how to use the antivirus tool, and "kav.exe scan /?" shows all the options you have when scanning for viruses. For instance, you can choose whether Kaspersky should delete infected files or try to disinfect them.