Recently I wanted to check the performance of some of our servers. I was especially interested in the speed of the built-in hard disks versus the speed of our SAN. A quick Google search revealed a few free benchmarking tools. The data I was looking for is not supposed to hold any scientific standards, so I didn’t care much about which one I should choose and I just downloaded the first one.

After the download had finished I unzipped the archive, started the program, and immediately got an error (CrystalDiskMark). I didn’t want to waste time figuring out what the problem was, so I just downloaded another tool from the Google result list from my previous search. This application (hdtune) did execute without any problems but after all tests were run an average transfer speed of 1419 Mb/sec was displayed. Quite impressive for a SAN with SATA drives.

So I tried the next one (iometer). After the first benchmark run it seemed that this tool is reliable. But once again I was disappointed. After five runs I had benchmark deviations of 200%.

Then I remembered a tool used by one of the magazines I read called H2bench. This tool should produce reliable results. Though the tool’s homepage is only available in German the tool itself is also translated into English. It is a CLI only tool, but its usage is pretty straightforward. The following command will benchmark hard disk number 0, display its results in English, and write a report in the file ‘report.txt’: 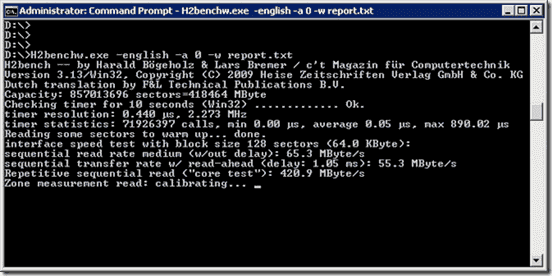 Make sure that you start the tool with administrator privileges, because H2bench accesses the hard disk directly and needs to be run elevated. For this reason it also only measures the read performance. If you want to test the write performance make sure there aren't any partitions on the drive and use the option ‘-!’.