Update: Readers reported that some antivirus tools detected a trojan in this tool. The AV software I am currently using (AVG) and a few others didn't detect anything though. Thus it might be a false positive. But just to be sure, I removed the links to GiPo@FileUtilities. I think the tool is not worth the risk.

The GiPo@FileUtilities is a collection of useful file management tools. It has the following functions: 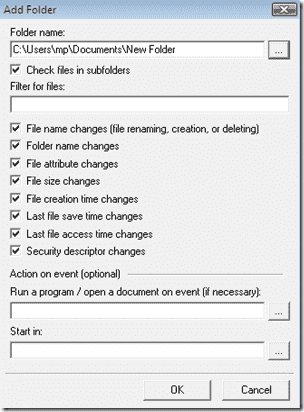 GiPo@MoveOnBoot can be useful in situations where a file can't be moved or deleted because it is opened by an application. GiPo@Mount enables you to mount a folder to a drive letter. You could use this feature if you want to access a CD or DVD from a hard drive. Hard links are quite common in the UNIX world, but even though they have been supported since Windows 2000, they are still not very popular among Windows admins. GiPo@ReadTest could be helpful when you suspect that an application isn't working properly because one of its files is inaccessible.

I think that GiPo@DirMonitor is the most interesting tool of the GiPo@FileUtilities. It allows you to monitor a folder, along with its subfolders, for any kind of changes. The windows user interface displays if a file was added, changed, deleted, renamed, etc. DirMonitor can also create an HTML report that lists all of the changes made since you started the tool. It is also possible to launch a program whenever a change occurs.