A while back I introduced DISM, the new tool of the Windows 7 WAIK (Windows Automated Installation Kit) for managing WIM images. I was complaining then that Microsoft doesn't offer a GUI (graphical user interface) for such an important tool. The nice thing about Windows is that if Microsoft doesn't provide a function, someone else steps into the breach. ELDI was kind enough to link to his free DISM GUI GDism ELDI in my original post. I’ve taken a quick look at the tool. 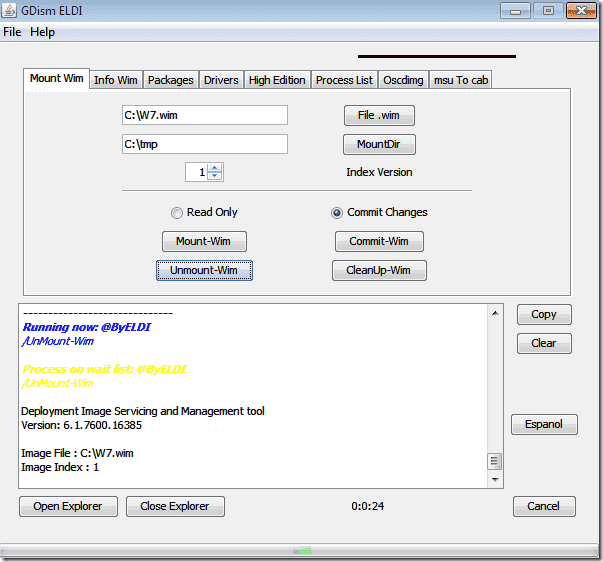 Let me start with the tool’s downside. It requires the Java Runtime Environment (JRE). I think it would be more useful if it were a portable application. However, if you use GDism only on your desktop, it is certainly more convenient than using DISM on the command prompt.

GDism also requires you to install the Windows Automated Installation Kit (AIK) for Windows 7 because it launches DISM from its GUI. I didn't find an option to tell GDism where DISM is located, so I just copied all its files to the folder where all the WAIK tools are located (C:\Program Files\Windows AIK\Tools\PETools). I suppose adding the directory to the PATH environment variable would have worked as well.

To run GDism, you have to launch the "Instalar" file. If you don't speak Spanish, you might want to switch the tool’s user interface to English. You can find the switch in the lower right pane on the mount tab.

I won't discuss all of GDism's functions because that would essentially boil down to describing DISM. You can mount WIM images and apply all kinds of changes, such as adding packages or drivers. The main advantage of using GDism is that you don't have to remember all the command line switches and can just focus on your main task. The DISM messages are displayed in GDism's lower pane and are also logged in a text file; therefore, you won't miss anything that DISM has to complain about.

Let me know your experiences if you tried the tool.

If you are interested in GUI for DISM, you may also like GImageX, a GUI for ImageX.

It appears the GDISM ELDI is no longer available for doownload. Please post a comment below or send me a message if you know where to find the tool.