If you’ve ever tried to use Wake-on-LAN technology, you may know that its configuration can be confusing sometimes. You have to enable WOL in BIOS and motherboard settings and correctly specify the WOL command parameters. Wake-on-LAN utilities (see a review for one of them) usually allow waking up one remote PC and require that you specify its IP and MAC addresses in order to generate and send a magic packet to it. In order to wake up multiple PCs, you have to write scripts to detect MAC addresses of remote PCs and execute a WOL utility to send the magic packet to every PC. A free Wake-on-LAN tool from EMCO is specially designed to wake up multiple remote PCs and allows automating all required operations. 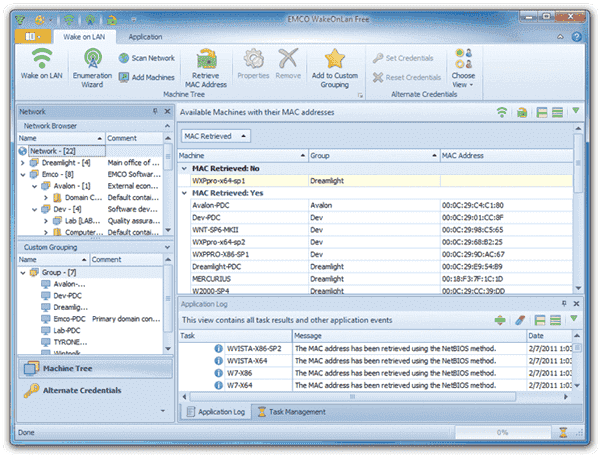 By using EMCO WakeOnLan Free, it's really easy to wake up remote PCs, because all the configuration steps that you have to perform manually when using other utilities are automated here. In order to initiate Wake-on-LAN, you only have to select target PCs and press one button to start the operation. The application has an automatic network scanning feature that allows detecting PCs available in the Active Directory and workgroups and selecting them as targets for the Wake-On-LAN operation. All detected PCs are displayed in the visual interface according to the network structure, including groups and organization units, so that you can save time by selecting an organization unit node in the domain as a Wake-On-LAN target if you need to wake up all PCs in this unit. You can also create custom grouping for the PCs which should be turned on simultaneously.

Another time-saving advantage of the EMCO WakeOnLan Free is an automatic MAC addresses detection. During a network scan, the application tries to retrieve MAC addresses for every detected PC sequentially applying four different methods until the MAC address is retrieved. In case of failure (for example, due to insufficient permissions on a remote PC), you can find the error message and troubleshooting instructions in the Application log and try to repeat retrieving the MAC address after following the suggested troubleshooting steps. Such automatic detection of MAC addresses for remote PCs can save you a lot of time and simplify your WOL configuration if you need to wake up remote PCs in a large network.

EMCO WakeOnLan Free was designed to be used in large corporate networks that may include different subnets. In such networks, both the network hardware and the Wake-on-LAN utility should be configured properly to guarantee WOL packets delivery. EMCO WakeOnLan Free provides different options for transmitting WOL packets, which include unicast and directed broadcast methods. You can select the appropriate method depending on your network configuration. Also, there is another option that can be extremely helpful for large networks. By default, the application is set to send Wake-On-LAN packets to multiple PCs in parallel to reduce the time required to wake them up. However, if multiple PCs are started simultaneously, it can cause a power peak. To prevent it, you can configure the application to limit the number of WOL packets sent per second.

If you are looking for a way to fully automate the wake-up tasks across the organization, the Professional version of EMCO WakeOnLan is the right choice allowing you to schedule WOL tasks and execute them automatically on a defined date and time.