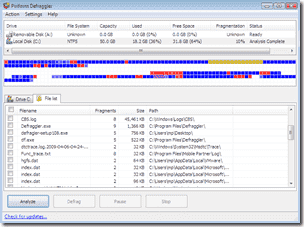 There are quite a few defragmentation tools out there, mostly because the Windows Disk Defragmenter has only limited capabilities. One missing feature is the ability to defrag individual files and folders. Disk Defragmenter only allows you to defrag individual volumes – but why would you want to defrag only individual files? The main reason is that defragmenting a whole drive or volume can be a time-consuming process. Sometimes you don't have time for this.

You probably know that defragmenting a virtual disk within the virtual machine is not enough, because this won't defrag the corresponding files on the host’s hard drive. In particular, dynamically growing virtual disks tend to fragment, which can significantly decrease the performance of the virtual machine. Under some circumstances, it might make sense to only defrag a certain virtual disk file. For example, if the physical disk is large, you can significantly reduce the defragmentation time if you defrag only the problematic virtual disk file.

Defraggler is a free portable defragmentation tool that enables you to analyze hard drives to find defragmented files. You just select the files you want to defrag. It is also possible to defrag certain folders. This can be useful if you have to defrag all virtual disks on a certain host. 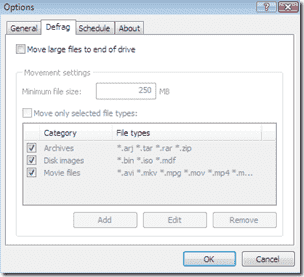 Another interesting feature of Defraggler is that you can move large files to the end of the disk. The transfer speeds at the hard drive's beginning (the outer rim) is faster because the disk sectors are rotating with a higher speed there. Moving large files that are seldom used to the end of the drive frees up disk space for smaller files at the beginning of the drive, which can improve the overall performance of a computer because program files are usually smaller than data files. Defraggler doesn't support moving large files to the beginning of the disk. This would be useful for virtualization because it would allow you to move the large virtual disk files to the sections with high transfer rates.

I know of two other free tools that support individual file defragmentation: Contig and WinContig. WinContig is only version 0.8; hence, I wouldn't use it in a productive environment. Contig belongs to Microsoft's Sysinternals suite and is probably more reliable. You can use it in scripts because it is a command line tool.