Michael Pietroforte  Fri, Dec 24 2010Fri, Jan 14 2011  file tools  7
Bleachbit is a free tool that allows you to free disk space and delete Internet history. It has a few advantages over comparable tools: It is Open Source, supports many applications, is portable, has a command line interface, and helps you to wipe disk space.
Contents

BleachBit is a free tool that allows you to clean disk space, on Windows (and Linux). For many third-party applications you can free disk space and to delete compromising files such as Internet history data. 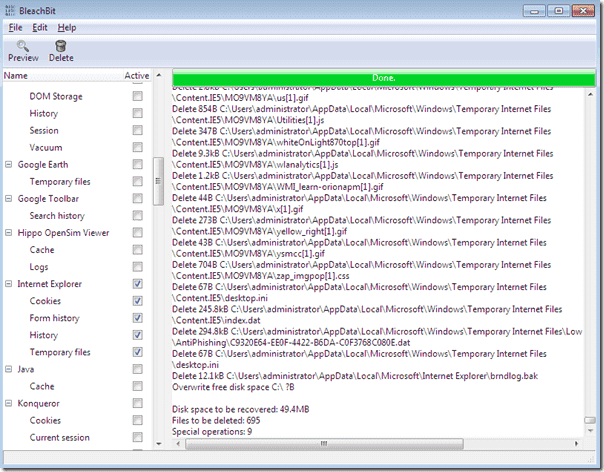 Thus far, CCleaner has been my favorite cleaning tool. I haven't yet had much experience with BleachBit, but the free tool has a good chance of getting a permanent place in my toolbox. Like CCleaner, BleachBit allows you to free disk space by deleting unneeded files from various applications. However, there are a few differences between the two free cleaning utilities.

I don’t really intend to debug the source code; however, Open Source tools have a higher chance of remaining free. It appears that CCleaner is no longer free because there is only a "Buy and Download" link at the top of the page. However, if you scroll down you'll find  links to third-party sites where you can still download CCleaner for free. It is as if the publisher wants to hide that the tool is free. Not that I think that CCleaner isn't worth a donation; however, it is poor practice to trick people into "donating" this way. By contrast, BleachBlit is listed at SourceForge.net where you won't be confronted with such little tricks.

BleachBit supports about 70 applications while CCleaner can only free disk space for 5 applications (see comments below). Developers can contribute to the project by submitting new "cleaners", that is add code for new applications which can be cleaned with the tool. This makes it likely that there will be even more supported applications in the future.

Cleaning up the mess that users have left on a workstation is a common task for administrators. A portable computer cleaner comes also in handy whenever you want to delete your own temporary files on a server or user PC after you have finished your administration task. Update: CCleaner is also available as portable version (see comment below).

BleachBit has a command line interface

Perhaps it is part of your security policy to regularly delete Internet history and free disk space on user computers. If so, you will like BleachBit's command line interface because you can use the tool in a script to automate the cleaning process on all your computers.

At first I thought that these are just nice additional features. However, on second thought, these functions make a lot of sense for a computer cleaning tool. The point is that no computer cleaner supports all applications. Thus, in some cases you might have to delete files and folders manually. To ensure that those files can't be recovered, you can use BleachBit's shred feature. If you deleted files with Windows Explorer or another application, you can use the wipe-free-disk-space function to also securely delete his data. (Note: CCleaner support file shredding but not the wiping of free disk space.)

Just in case you happen to speak fluent Asturian, you can change the language of BleachBit's user interface. The sheer number of supported languages demonstrates how many different people are involved with the project.

I have only one complaint about the tool: its name. When I wrote this review, I couldn't stop writing "Beachblit." This might be due to my affinity to beaches, but somehow I like this name better. 😉 I have tested BleachBit 0.8.4.0.