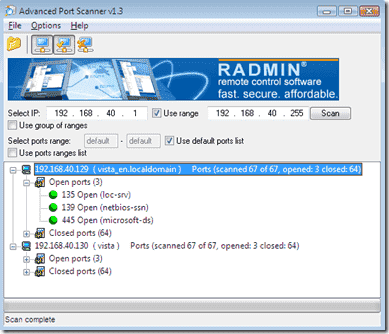 My favorite port scanner is nmap—not the mere command line version, but together with the GUI Zenmap. The disadvantage of nmap is that it is sometimes too powerful. If you only want to run some simple port scans every now and then, you probably will prefer a simpler tool that just has the features you really need. Advanced Port Scanner is such a tool, even though its name seems to imply something different. Nevertheless, it has all the functions most admins need.

What distinguishes Advanced Port Scanners from similar tools is its wizard that helps newbies to configure the tool. For instance, the wizard asks how fast the computers in your network are and how many you have.

You can either scan a single computer, an IP range, or multiple IP ranges. If you often have to scan the same IP range, then you can use the tool's save and load function. It is also possible to auto-load the last used IP's list and port ranges on startup. Unfortunately, Advanced Port Scanner only supports port ranges, but you can't work with port lists. 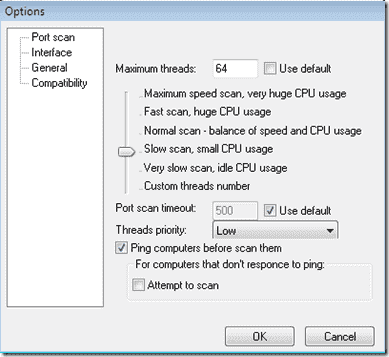 However, if you just want to know what open ports in your network exist, then this should be sufficient. Since the tool scans with multiple threads, it is pretty fast if you scan a local network. You can configure the number of threads, thread priority, the scan speed, the scan time out, and if computers should be pinged before they are scanned. The latter option speeds up port scans significantly because computers that are offline will be omitted.

You can export scan results into a text file. The tool has simple script language that allows you to format the output to your liking.

A comparable tool is SuperScan. What is your favorite port scanner?