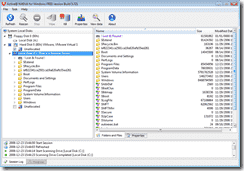 As an IT pro, you probably know that deleting data from a hard drive doesn’t ensure that it can’t be recovered with an undelete utility even though you emptied the Windows Recycle Bin. Even if you format a hard disk data it can be recovered. Thus if you take old PCs out of service, you have to wipe all data from the hard disk with an erase tool such as Active@ Kill Disk to ensure that nobody is able to access sensitive data. In particular, PCs that have been used by admins can contain stored passwords or hash codes of passwords which might be in danger once a bad guy gets physical access to the hard drive.

There is a free and a commercial version of Active@ Kill Disk. The main difference is that the free version only supports a one pass erase method. Sophisticated overwriting standards such as Peter Gutmann’s algorithm use up to 35 overwriting rounds. Active@ Kill Disk also supports the well-known DoD 5220.22-M of the US Department of Defense.

The question is whether the hard disks on your PCs contain data that could endanger national security if the wrong person gets access to it. If not, the one pass method of the free version of Active@ Kill Disk is most likely sufficient. This Wikipedia article claims that ATA disk drives manufactured after 2001 (over 15 GB) can be effectively cleared by one overwrite. You also have to take into account that overwriting a hard disk is quite time consuming. It took me 16 hours to erase a 300GB hard drive with the one pass method of Active@ Kill Disk.

Non-system disks can be erased with the Windows version. To purge a complete system drive, you have to boot the DOS version Active@ Kill Disk from a CD, a USB flash or a floppy. The Active@ Kill Disk suite comes with tools that help you create the boot media. The commercial DOS version also supports password change, partition recovery, and disk imaging.

The Windows version can also be to wipe only unallocated data. This also works for the system drive. When the operating system deletes files on the disk, it only clears their directory entries. This is the reason why undelete utilities can recover deleted files if they have not been overwritten by other files yet. Thus, if you have deleted sensitive data you can use Active@ Kill Disk to completely erase it.

What I am missing is a feature that allows me to directly erase a file or folder from Windows Explorer. AbsoluteShield File Shredder works like this.

Do you know another good erase utility? How do you dispose old hard drives?