Michael Pietroforte  Wed, Nov 12 2014Wed, Nov 12 2014  commands, patch management, wsus  7
ABC-Update is a free command-line tool that allows you to install Windows updates. It is easy to use and gives you the flexibility of deploying only specific updates in your scripts.

A while back, I reviewed the comparable tool WuInstall. WuInstall has a few more switches than ABC-Update has, and it supports caching. However, contrary to WuInstall, ABC-Update is free. Thus, if you plan to update Windows at the command prompt every now and then, ABC-Update is worth a look.

I think patch management tools will gain importance once Windows 10 is released to the public. You’ve probably heard that Microsoft is planning no major releases after Windows 10. This means that, in the future, all changes to Windows will come through Windows Update.

Enterprises will have the ability to opt out from feature updates and to automatically install security updates only. However, even the most conservative IT departments will be tempted to install one enhancement or another. And, since updates often depend on other updates, things will get complicated. If you work in a complex network, scripting gives you the maximum flexibility. This is where command-line tools such as ABC-Update come in.

ABC-Update requires .NET Framework 3.5. If you launch the tool the first time on a Windows 8.1 machine where you didn’t install this version of the framework, Windows will automatically download and install .NET 3.5.

ABC-Update itself is a standalone tool and doesn’t have to be installed. You can copy it to the folder of your choice. If you just run ABC-Update, you will get a list of all missing patches from Windows Update. 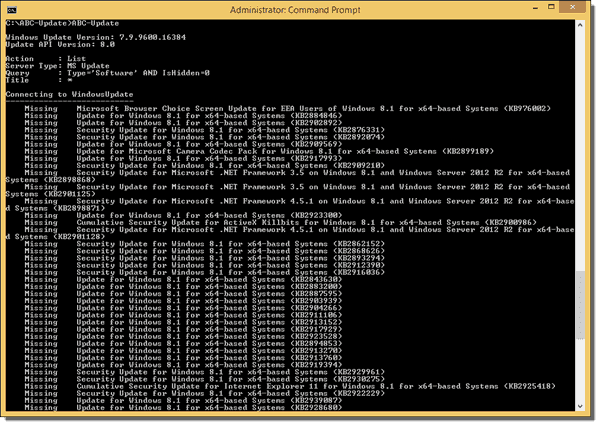 If you have a WSUS server installed in your network, you can also bypass Windows Update and search for updates on WSUS instead by using the following command:

ABC-Update allows you to install all missing updates, only updates of a certain category (security, application, etc.) or type (software or driver), or only a specific update (KB number). The date filter, which enables you to select updates within a time period, is useful. For example, suppose you don’t want to always install updates right after they are released because you want to wait until other admins have found all the bugs. The following command lists all updates that are more than 30 days old:

I ran the command on October 29. As you can see in the screenshot above, ABC-Update only lists updates that were released before September 29.

If you are ready to install the listed updates, you would run the following command:

ABC-Update also supports filtering by string and enables you to control reboots after installations and uninstalls. Below is a list of all available parameters, which you can display with ABC-Update /?.