The final of Adobe Integrated Runtime (AIR) has been available for some days now. I was curious enough to play a little with it since there are so many who predict that these kind of new online apps might change IT, and particularly the work of Windows admins, fundamentally. Adobe AIR is like Microsoft’s Sliverlight a runtime environment for rich Internet applications (RIA). Contrary to old-fashioned web apps they are supposed to have the same comfort and responsiveness like desktop applications. And contrary to old-fashioned desktop apps they are supposed to be platform-independent. 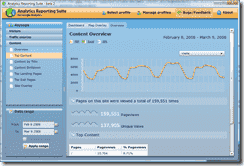 Analytics is a statistics tool from Google. I have been using the web-based version quite often. Like many of Google's web apps it has already a very good responsiveness. So, I was interested to see if the AIR version is better here. The design of the user interface is indeed better. However, its responsiveness is pretty much the same. The reason is obvious. Like with the web-based version the statistics data has to be loaded from one of Google's datacenters first before it can be displayed. Most of the time, one doesn’t have to wait, but sometimes the “cloud” is just a little too busy. 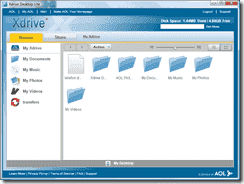 Xdrive is an online storage provider. You can upload your files using a web-browser. The free version offers 5GB storage. I guess, it is a matter of taste, but managing files with a web-browser is not really my thing. However, the AIR version of Xdrive is really nice. It is almost like working with Windows Explorer. You can easily upload and download files using its drag and drop feature. There is one important feature missing, though. You can’t open a file with its associated desktop application. This is the main reason why Xdrive can’t replace a local file server. I think that this is a general problem of RIAs. Even if they support such a feature, opening a file with an application that is not under the full control of the security system of the operating system is a dangerous thing.

I also tried Twirl, a twitter client that is based on AIR. Unfortunately, I wasn’t able to logon with my twitter account. It is only beta software, so I guess, there is a bug. However, there is one thing which is interesting to note. When I first installed it, I got a message that I am running the wrong AIR version. The latest Twirl release is based on AIR beta 3. Only the pre-release version of Twirl works with AIR 1.0. This reminds me a little of Java. Every time I want to use a Java app on my desktop, I get a message telling me they I don’t have the right Java runtime installed. That is quite frustrating.

By the way, you can follow me now on Twitter. This is just an experiment, though. But my plan is to post short comments about interesting findings related to Windows administration. You’ll find links to my blog posts there as well.

The prospects of AIR ^ 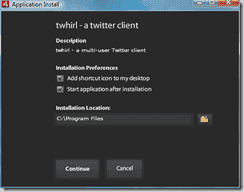 So all in all, I can hardly imagine that AIR can really replace desktop applications. Software vendors might find AIR interesting because it allows them to develop apps that run on every platform supporting AIR. However, from a user’s point of a view there are no real advantages. AIR apps have to be installed like desktop apps. That is when you want to use an AIR app for the first time you have to download it and follow an installation wizard like with a desktop app. If you want to get rid of it, you have to uninstall it exactly like with desktop programs. So unlike web apps, you have to manage AIR apps on the desktop.

But AIR apps suffer from similar downsides as web apps. That is they can’t provide the same functionality as desktop apps. The reason for this is because they can’t be integrated in the operating system like desktop apps. Xdrive is a good example for this. Thus, the fact that AIR is platform-independent is its biggest downside. AIR is quite similar to the Java approach. Java on the desktop was a complete failure, though. I think AIR could have a better future. However, most likely it will only replace common web apps and simple desktop apps. But a sophisticated application such as Photoshop is hardly imaginable in AIR.