Mike Kanakos  Tue, Sep 15 2020Wed, Sep 16 2020  active directory, powershell  3
Finding nested groups in large Active Directory groups can be a challenging task. Active Directory includes the cmdlet Get-ADGroupMember for finding group members, but it cannot be used to query groups with over 5000 members. The cmdlet also suffers from performance bottlenecks. I'd like to share with you a tool I built that solves both those problems.

The problem with nested groups ^

Active Directory supports the concept of "nesting" groups inside one another. For example, consider two groups: GroupA and GroupB. GroupB can be a member of GroupA. If I assign GroupA write permissions to Folder1, then the members of GroupB also have write access to Folder1. Nesting groups inside each other can be a powerful way to assign access dynamically. There is no limit to the amount of nesting in Active Directory. For example, this scenario is valid (but not recommended):

That scenario can be challenging to unwind and report on. A circular reference can occur if an administrator is not careful. This occurs when groups are nested inside each other, creating an endless loop.

Microsoft created the Get-ADGroupMember cmdlet to return lists of group members. For everyday tasks, it works as advertised. If I want to see the members of a group called ParentGroup05, the syntax is straightforward.

The results show that there are three group members and a nested group named NestedGroup05.

But if you look closely, we have a potential problem. The cmdlet so far has shown the number of users OR a list of users and groups. If we perform a recursive search, it returns the data in one format (a flat list of users without group membership info). If we perform a non-recursive search, it returns the data in another format (a list of parent group users and a list of nested groups).

In the examples above, there were criteria that could be useful: the presence of nested groups, the number of users in a nested group, and the concept of recursion or finding groups within groups. Get-ADGroupMember has trouble returning this information. However, Get-ADGroup can return the information we're looking for. 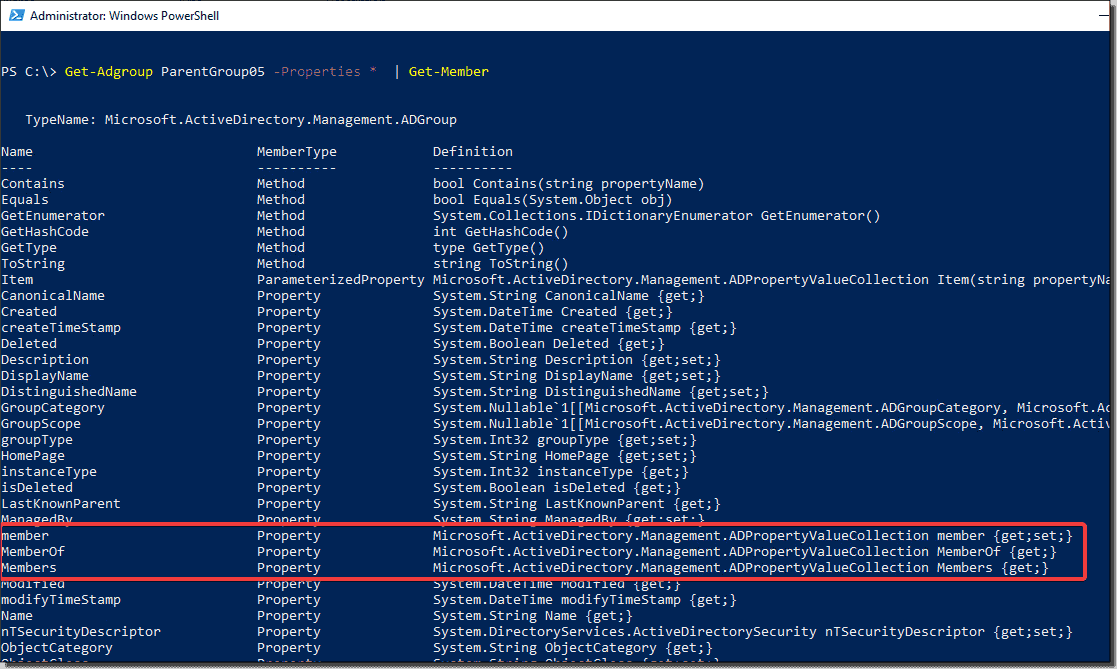 Why is this important? There are two important aspects here that make this significant. We said earlier that Get-ADGroupMember isn't returning the data we want, so we need to look elsewhere. Get-ADGroup offers an alternate way to get the data we are looking for, and we can use PowerShell to access the data. If it's available via PowerShell, then we should be able to grab the data and format it as we wish.

This line instructs Active Directory to return only the groups that are members of $ADGrp. I saved the output to a variable and then the rest of the information was available by grabbing various properties. From there, I built a function that allows me to pass in a group (or multiple groups) to query and then format the results as I wish.

Here's what the output of my function Get-NestedGroup looks like when I query a group called ParentGroup05. The group has one nested group inside it, which has three members.

The tool then checked those two groups and found one more nested group named LargeGroup3000. Each group that is found also displays the number of group members and some basic group information.

The Get-NestedGroup tool can be used with a Server parameter. This gives the ability to query results against a specific DC (or a dc in a different domain). If no server is input, the tool finds a DC in the same site that the query is run from. This guarantees that searches remain fast.

The tool can query multiple parent groups at a time like this:

I prefer the Format-Table output for more complex lookups, but the default view can be useful.

One thing I haven't mentioned yet is how fast this tool is! It returns results in about 15 milliseconds. If a similar recursive group lookup is done with Get-ADGroupMember, the results take anywhere from 5 to 20 seconds to complete.

The latest version of this tool is always available in my PowerShell GitHub Repo.