Find the product GUID of installed software with PowerShell

Adam Bertram  Fri, Jun 22 2018Fri, Jun 22 2018  deployment, powershell, registry  8
The GUID is what uniquely identifies a piece of installed software among all of the other pieces of software on a computer. By creating a simple PowerShell script, and using a little registry-fu, we can create a function that easily extracts this information.

Software management in Windows has always been a painful ordeal. It seems like every piece of software installs differently! But, usually, they have one thing in common – the product GUID.

First, you'll need to know where a product's GUID is located. Spoiler alert: it's in the registry.

The registry is a big place though. We're looking for two (or more) keys in the following paths:

These are where each piece of software places its keys when installed on the system. If the user decided to install the software under a user context, you'd find the registry keys here:

In these registry paths, you'll find the keys that represent each piece of software installed on a Windows PC. 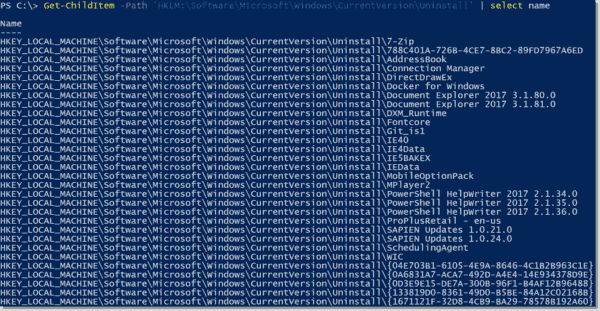 You'll notice that some key names start with a GUID while others don't. This is what I mean about no standards! The type of installer is what dictates the changes to the PC that the installer makes.

We can use the Get-ChildItem cmdlet to query the registry keys and extract the GUID from each of the paths mentioned above. Notice in the screenshot below that I can narrow down the output to only those keys with a GUID, using the PSChildName property.

This is great, but not much use because I can't see which software title relates to each GUID. It'd also be nice if we could enter a title and then be returned a single GUID.

So let's create a script for this.

First, we need to pull together the results from each of the registry paths. You can see below that I'm creating an array from each registry path. Since there could be multiple users on a PC, I'm forced to manually mount the HKEY_USERS PS drive and check each of those paths as well. This gives me a full picture of every piece of software installed on the system.

Once I’ve collected the keys from all of the paths, I need to loop through them and extract the registry value that represents the title from each of the keys. I do this by running Get-ChildItem on each of the keys, limiting it to only the keys named 'GUID'. I then use calculated properties to return both the GUID property and the name property, by using the GetValue() method on each key to extract the name of the software.

Once I have this code in place, I get output that looks like this:

At this point, I could be done if I wanted, but I'm usually not looking for all of the software titles' GUIDs. I only want one.

This is a great place to create a function, so I've done exactly that. The function is called Get-InstalledSoftware and pulls all of this logic together to allow us to pass a software title to a function and return the software’s GUID:

Using this Get-InstalledSoftware function, I can now use a single command to query all registry paths for the GUID for a single software title.

Querying for a single software title